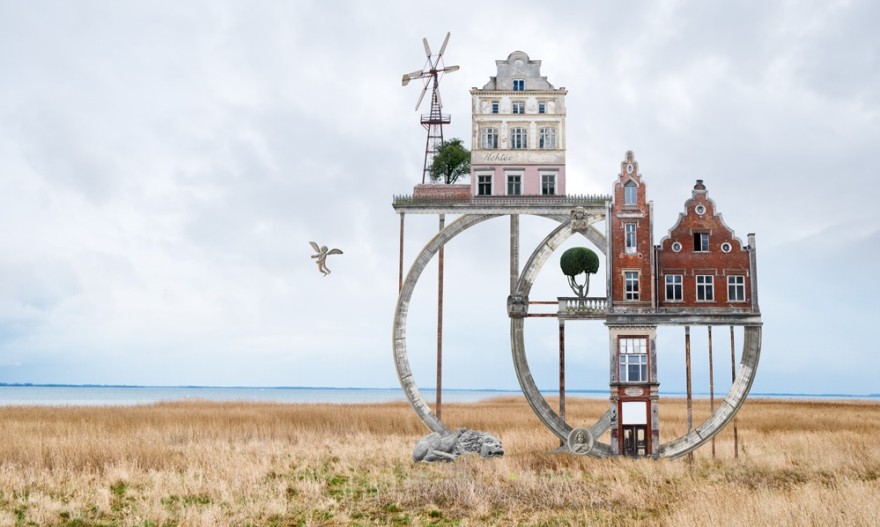 What’s the difference between art and architecture? Here’s Archdaily’s Vanessa Quirk with a run of the mill definition:

Art is a form of self-expression with absolutely no responsibility to anyone or anything. Architecture can be a piece of art, but it must be responsible to people and its context.

What, then, does one make of Matthias Jung’s architectural collages? The German designer cuts up architectural features and pieces them together against ethereal backgrounds in order to create otherworldly designs. Jung’s end results—collections of doors, arches, and windows with some bricks to fill the gaps—are definitely not livable, but that won’t stop you from wishing that they were. To live in one of these collages would be like living in an IRL mash-up of Monument Valley, Brick Blocks, and Wes Anderson’s The Grand Budapest Hotel, which is to say it would be neat but rather precious.

Jung’s collages are probably not what Quirk would describe as architecture—buildings that float in midair are definitionally not responsible to either their natural contexts nor humans. Yet it’s hard not to sense that Jung’s compositions, improbable though they might be, are going for more than mere artistic composition. The pieces of the collage work together as buildings, not livable buildings, but buildings nonetheless. The doors and windows relate to one another. They are not just there to amuse you; the buildings retain a sense of proportion.

Plenty of architecture is wholly irresponsible to people and context. The City of London’s Carbuncle Cup-winning Walkie Talkie might as well have been named “Fuck context and look at all my money!” (Its official name is 20 Fenchurch Street) Architects are also not famous for their sensitivity to humans. Frank Lloyd Wright famously nailed much of the furniture in his houses to the ground, lest occupants rearrange items to suit their needs. So much for humans. Architecture ought perhaps aspire to be respectful of people and context, but it isn’t all the time. Insofar as that is the case, Matthias Jung deserves credit for his architectural experimentation. You couldn’t live in these houses, but there is inherent value in inspiration.