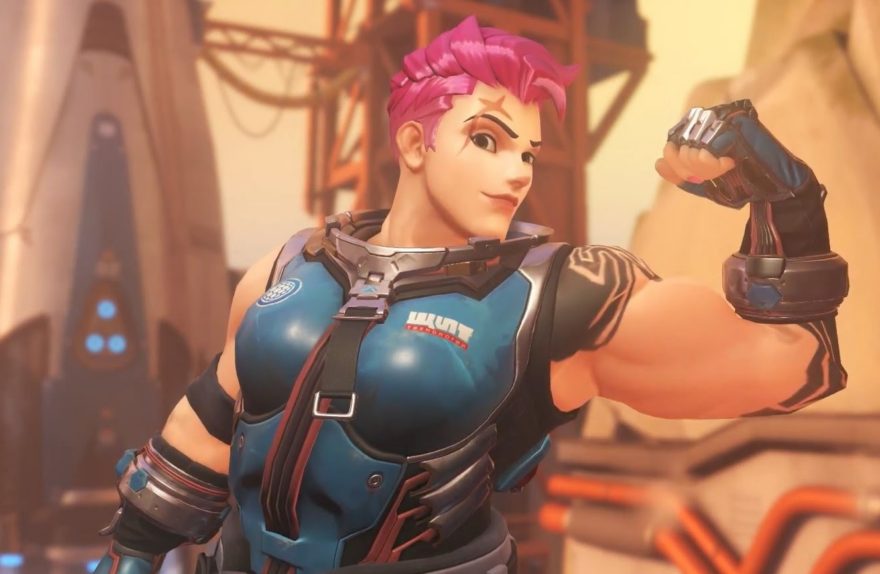 We love Overwatch. And so, we assembled 22 of our best writers and set them to work—a writer to jump into the skin (or robotic shell) of each character. The result is 22 odes. You can use the“Overwatch odes” tag to leaf through them, all use the handy list at the bottom.

Zarya’s existence in Overwatch began as an apology or, more accurately, as reparation for videogames ignoring the existence of plus-sized bodies (particularly of the female variety). After fans called Blizzard out for a stringent lack of diversity in their female body types a couple years ago, they responded with Zarya, a pink-haired, full-bodied Russian bodybuilder, and the game’s first female tank character.

Recalling another fuchsia-haired Russian badass of popular culture, Zarya is one of the most popular, powerful, and invaluable characters in Overwatch—female or otherwise. That’s awesome, but it’s also causing some cognitive dissonance for Blizzard’s more conservative fans. Kotaku’s Cecilia D’Anastasio wrote a thoroughly researched article on the debate over Zarya’s identity.

On one hand, as one of her catchphrases implies, Zarya is Mother Russia reincarnate: she exudes strength, patriotism, pride, self-sacrifice, and a distaste for unwarranted smiling. On the other, many have (uncomfortably) assumed that her pink hair and traditionally masculine build are indicative of her being a lesbian. In her research, D’Anastasio found that Russians felt particularly conflicted over this supposed incongruity, with some even implying cultural inaccuracy. “In Russia, you would never find someone like Zarya on the streets. These kinds of stereotypical lesbian masculine girls with flashy hair are super rare gems in Russia,” one commenter said.

Zarya’s “inconsistencies” may very well be a result of Blizzard being pressured into making a female tank character. She may not represent the typical Russian woman because she may not have originally been conceived as a woman. Indeed, she wouldn’t even be allowed to live freely in Russia today if the speculation over her sexuality turned out to be true. And that’s precisely what makes her incredible. If nothing else, Zarya is living proof of what an insistence on diversity and representation in games leads to: conversation.

If Zarya had been a male bodybuilder, Russia would have had one more stereotypically masculine character to call its own, and the rest of the world would have had one more piece of fodder for the Putin riding a horse meme. Instead, we have a conflict of clashing ideals that makes you stop and think about the validity of both sides. Is Zarya culturally inaccurate because being gay in Russia is illegal and forces the LGBTQ community to live in the shadows? Or are we so near-sighted that we can’t imagine a not-so-distant future where Russia changes?

In Zarya’s Russia, 60 years from today, a woman can dress and live as an individual while still representing her country and even putting its safety before her own glory. After all, Zarya means “dawn” in Russian, and who’s to say her very existence isn’t indicative of a new cultural beginning. One of Zarya’s abilities is emblematic of the kind of chutzpah it takes for a non-traditional woman in Russia to achieve this kind of national success. With shields that convert damage into a powerful attack, Zarya’s used to turning people’s disdain into motivation.

Go ahead and make your assumptions about Zarya, her body, her sexuality, and her right to be a Russian nationalist. Throw everything you’ve got at her, because it only makes her stronger.

D.Va – An ode to D.Va, the sassiest dream girl this side of Overwatch
Reinhardt – An ode to Reinhardt, tortured scion of a broken land
Roadhog – An ode to Roadhog is an ode to ugliness
Winston – Winston, the Science Gorilla, is in charge