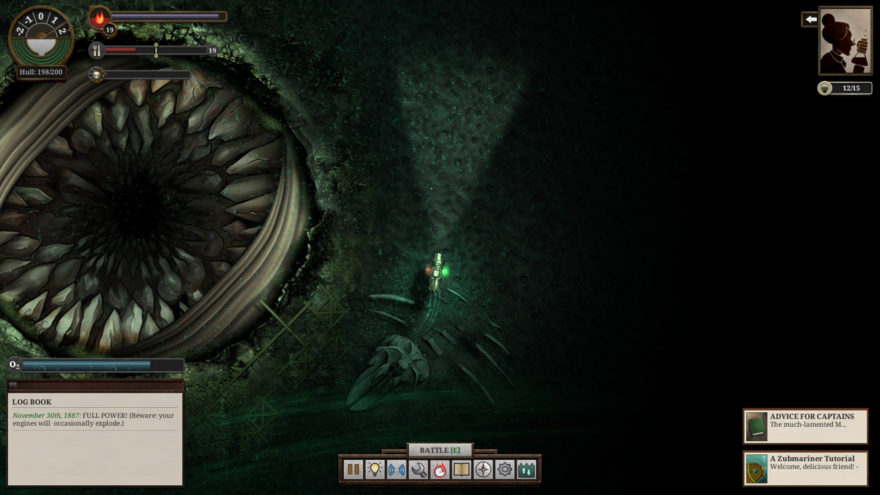 That Lovecraft’s infamous eldritch horror Cthulhu shares a similar appearance with a being from the deep only highlights a certain connection between the abyss below and the terror-filled void of science fiction works. While we’ve yet to discover extraterrestrial lifeforms, the sea floor is home to species with gaping maws and needle teeth, black eyes and bioluminescent bodies, that would be at home among alien monsters. Much like the expeditions of the Enterprise and other space-bound vessels, submersibles drift through the abyss, shielding crew against the inhospitable environment outside.

Failbetter’s Sunless Sea (2015) was a unnerving hybrid of the terrors of the depths and of lovecraftian cosmic horror, as your captain explored the unknown waters around the displaced city of London. It was a world of cults and devious gods and cannibalism and island settlements crafting their own weird ways of life within the subterranean landscape. But the surface was only just one layer of Sunless Sea. The recent Zubmariner expansion reveals that other horrors lurk in the darkness underneath.


Zubmariner expands Sunless Sea to include another map below its islands and ruins, where legends of sunken riches and powerful secrets await to be sought by a brave soul such as yourself. While the “Zee” was already shrouded in shadow, underneath is even blacker. Your zubmarine’s headlight and running lights illuminates only a sliver of the abyss, leaving you surrounded by claustrophobic darkness.

the thrill of discovering the city of drowned delights

Incredible discoveries can be found by a careful captain—underwater cities with cultures and customs even stranger than those above, horrific beasts, long-lost vessels—and Failbetter’s atmospheric prose imbues them all with Gothic mystery. What explorer can deny the thrill of discovering the city of drowned delights, the truth of the Seven Against Nidah, the Unclear Bomb? Surely such finds are worth more than your own sanity…

Before descending below, the surface world also received new quests and secrets, from new passengers with unique missions to additional illicit jobs to complete and (more than usual) otherworldly happenings over on Mutton Island? Whether sailing the surface or braving the darkness beneath, Sunless Sea offers a wealth of new opportunities to propel your captain’s legacy and explore the lore of its fascinating world.

Sunless Sea’s Zubmariner expansion is available for $10.99 on Steam, Humble, and GOG. You can learn more about developer Failbetter, Sunless Sea, and Fallen London on their site.