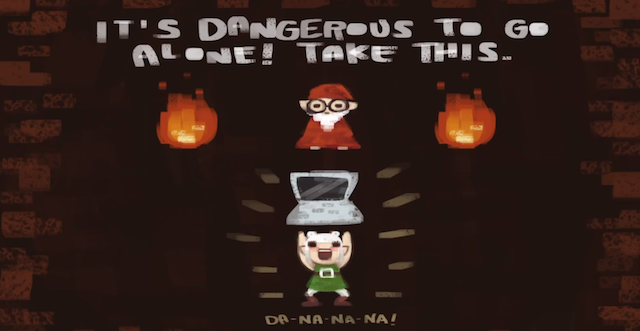 In games, we face strange questions that don’t tend to come up in other mediums. Here’s one. When did The Legend of Zelda become a genre?

Hack ’n’ Slash is a rather blatant homage to the series starring a stubby elf in the green tunic who’s saved the world with a bow, boomerang, and hookshot on numerous occasions—but there’s a twist. Instead of the normal stockpile of bombs and arrows, your very familiar-looking lad and his fairy-friend will deconstruct the dungeons using computer skills, namely hacks, cracks, and cheating. Thus, Hack ’n’ Slash, get it?

The concept is definitely inventive, but the wrapping paper has been used and reused. This is the latest example of the continuing fetishization of Zelda, a trend which includes titles such as Ittle Dew, Superbrothers: Sword & Sworcery EP,  and Oceanhorn. This is a very recent thing, introduced when Okami directly mimicked the format in 2006. Even Nintendo have been guilty of making games that are too Zelda-y, a common criticism of the rut that that series has occassionally fallen into. I find it wistful and peculiar that people want to keep playing the same game forever, and have to wonder what magic the Zelda archetype has over us.