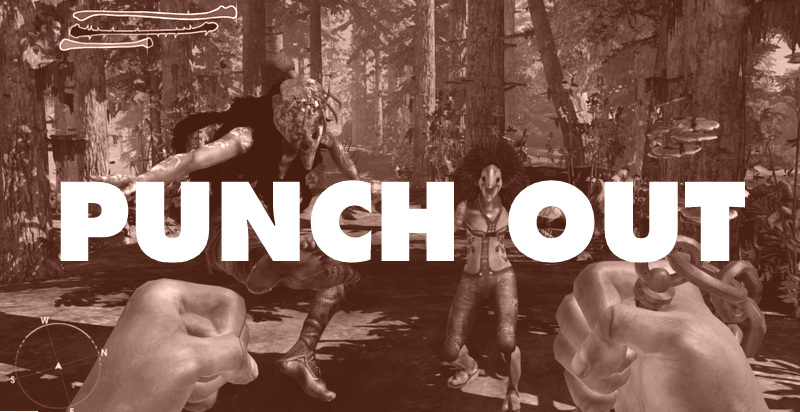 Zeno Clash 2 begins confidently. The camera moves across a bar, taking in its motley denizens. A pile of fat jiggles and hoists a drink to its most mouth-like opening. “I know what the golem can do,” something yells at me. “It can put your FatherMother in a cage!”

I am me now, looking out at the bar. Everyone is furious. They jog toward me and slap my head, growling. Their faces are ghastly, so I click at them and they move away. More clicks—they’re on the ground. This is good. I click until they all lay motionless. There’s nothing else to click, no one to talk to, so I leave.

I take the weapon he gives me and beat him to the ground with it.

A lady with a huge hat has followed me out of the bar. “What’s this about?” I ask her. “It’s about punching people in the face,” she responds.

Okay, then. I’m in some sort of city, an ornate creation of bones and statues and dusty jewels. People walk in ghostly straight lines or stand stock still. I learn, after a bit, that all I can do to these people is punch them. I approach one man standing around with an expectant look, but he’s different—he wants to talk! I am led to some other little man, who I pummel to the floor. Meanwhile, fellow #1? He has not moved an inch, even though it’s now night-time and it was noon when we first spoke. He wears the same bovine look of expectation. I take the weapon he gives me and beat him to the ground with it.

As these confrontations grow in intensity they become masterpieces of tiny frustrations. I can identify an individual opponent, but my are movements erratic and slow. Mobility is key, as the fighting of Zeno Clash 2 has dilated from the focused arena combat of the first game into bigger sequences of all-out team brawls. The enemies often still have names and bespoke faces but they come in waves, swarming around me and taking sucker shots at the back of my head.

The only option is to run up to people, punch them, and run away, like some grade-school asshole.

I decide, nevertheless, that these cavemen, sack-faces, gnomes, and aliens deserve it. As I batter some sort of birdman, I notice that with each blow, he elicits a baby-like squawk that enters my ear as pleasantly as a ballpoint pen might. Other enemies emit squeals of delight, and others barely react at all, making my furious punches feel for naught.

I punch anyway. I punch until they crumble. Their bodies are nubs at the center of the screen, and like a worker on an assembly line, I manipulate each nub as it comes my way, beating each one until it moves on and the next one comes my way. Until, at some point, the line stops. I stop, too, to look around. Glorious blue skies peel peacefully overhead, purple lilies and majestic tendril-like plants dot the landscape, and frothy spumes of water spout from nowhere. I investigate these things amidst glorious lens flare.

I find nothing. For all its lively beauty, this is a dour, lifeless world. It conspires against my enjoyment, which is strange to say about a series devoted to, well,  punching things in their faces. But all of the things that made Zeno Clash so rewarding—its concision, its focus, its unabashed novelty—are obscured here by a litany of distractions. Gain skill points and level up! Choose side quests! Recruit allies for all-out brawls!

These adornments to the combat ought to create a greater sense of purpose. The fist-fight, after all, is an act of profound intimacy, and it thrives upon character and context. The almost mystical reverence we afford fighters—whether heroes or shitheads, Ali or LaMotta—isn’t just for their ability to punch and be punched. It’s for their heroism or shitheadedness. It’s for the tough, chin-up stare-down at the weigh-in, and the manic iciness in their eye after the knockdown blow.

It’s why we still remember Glass Joe and King Hippo 25 years after we first squared up and threw a jab at them. There doesn’t need to be a story explaining a fist fight. There just needs to be two characters, fighting.

The various characters of Zeno Clash 2, then, are punchable only because everything in Zeno Clash 2 is punchable. For all their beauty they are idiots stranded within an empty, idiotic world. I punch them because it’s all I can do, but also because I hate them. My hatred dilates, enveloping the NPCs standing around obtusely, the fauna nipping at my ankles, the streams of squeaking enemies, the allies launching soaring high kicks into each other. And who am I within this world? I jog up to someone, punch them unbidden, and jog away. My wiry little sociopathic fists stand, as ever, at the ready, but for a moment I mourn. From a first-person perspective, the only face I can’t click on is my own.

So I find some dinosaur and click on its.