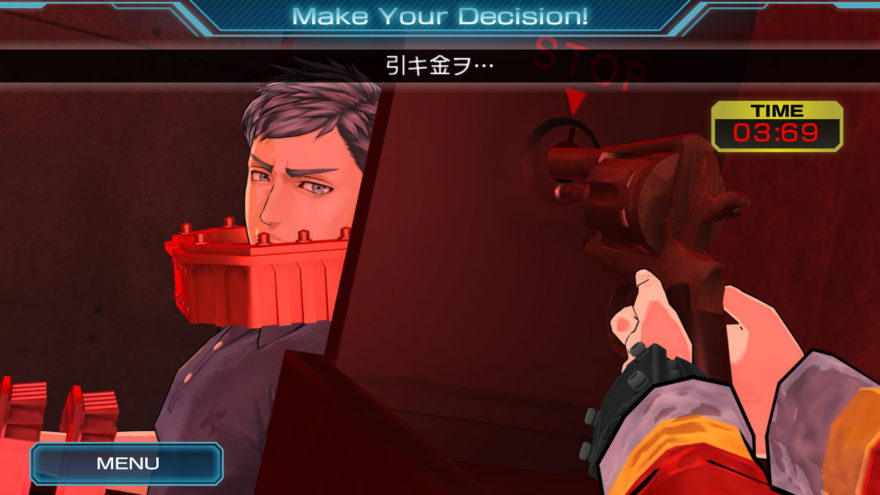 Zero Time Dilemma wants to know how it feels to kill someone. To take someone’s life, whether it’s to ensure your own survival, or someone else’s. What it’s like to be driven mad when you end up in a situation like its protagonists—trapped in an underground shelter, where initiating six acquaintances’ deaths is the only hope for freedom. Zero Time Dilemma wants to answer these questions. But the truth of the matter is that it depends on who you are, where you are, and the context of the situation. And, of course, this being the Zero Escape universe, it also depends on what timeline you’re in, and what kind of person you are within that specific history.

True to its topsy-turvy namesake, Zero Time Dilemma is the third game in the series but actually falls somewhere in between the first two games: 999: Nine Hours, Nine Persons, Nine Doors (2009) and Virtue’s Last Reward (2012). This peculiar chronological placement isn’t too surprising for a series that is known for its unconventional storytelling with as many branches as an ancient, gnarled tree. And Zero Time Dilemma is keen to follow suit, its splintering story overloaded and fractured to a thrilling effect. The story can go any way imaginable—from everyone coming away completely unscathed to literally causing the apocalypse—more so than maybe anything else I’ve ever played.

It starts in a similar way to the seminal “torture porn” horror Saw (2004). Jigsaw, the recurring serial killer mastermind of the Saw series, kidnaps and traps his victims within mortal puzzles. “I want to play a game,” says Jigsaw ominously. The game is, obviously, a deadly game—one of murder, deceit, and possibly triumph against the odds (even if that does require losing a limb or two). But that’s where the similarities to Saw come to rest. In Zero Time Dilemma’s aptly named Decision Game, you are given the choice to make nail-biting—yes, you guessed it—decisions. A lot of them, in fact. Sometimes one person dies, sometimes no one dies, sometimes everyone dies. Sometimes it asks you to remember a birthday that belongs to an alternate timeline, or you’re shit out of luck, and it’s back to the fragments menu. No matter what, it’s up to you to dictate how these choices are directed. And it’s up to the characters to blame the mysterious game master Zero—or each other—for being put through such a dastardly situation.

That’s nothing new for videogames, and Zero Time Dilemma knows this, hence it attempts to compromise your perceived safety behind the screen by playing your own gains against the sacrifice of your fellow victims. If killing the other two teams by pressing a button ensures your freedom, would you press it? If taking a 50/50 chance of firing a gun (with the minor chance of a blank) into a close friend’s head to ensure the safety of another who’s about to be incinerated, would you still shoot? It’s not just the choices you make in accordance with the characters either—but how the ones surrounding you react. It turns into a game of predictions: how will my teammates react if I do this terrible thing? Even a seemingly well-meaning decision can go awry. Like trying to save yourself and the other team, but someone on your own team goes mad with anger, and bashes your head in a dozen times. Saving lives can turn into madness. Suicide. Murder. Time jumping. Anything that can go wrong as a result of your decisions, will go wrong.

Of course, the effectiveness of these cruel games Zero Time Dilemma plays against you relies a lot on you giving a shit about its characters. It’s in this that the game excels. If you’ve played the previous games in the series, then you’re instantly going to be drawn to the four familiar faces—Sigma, Phi, Akane, and Junpei. But there are also five fresh names vying for your heart. The nine of them are divided into three teams: C-Team (Carlos, Akane, Junpei), Q-Team (Q, Mira, Eric), and D-Team (Diana, Sigma, Phi). Of the new acquaintances to join the series, Carlos and Diana feel most at home. Diana’s sweet and caring—almost to a fault. Carlos is quick-witted and big brotherly to his teammates. The weak point, however, rests in two of Q-Team’s newcomers: the sociopathic Mira and puppy-dog-eyed Eric. Neither are particularly endearing, and the twists that befall the team don’t hit as hard as they should because of their yawn-worthy characterization. It’s a shame, especially in a series with so many multi-faceted, smartly written characters in the past.

Anything that can go wrong as a result of your decisions, will go wrong

This ‘who will survive’ mentality, pulling your affections apart like zombies at a feast of guts, is at times comparable to last year’s teen slasher thriller Until Dawn. But where Until Dawn’s choices lie simply in “who dies” and nuanced character interactions, Zero Time Dilemma wants you to think harder about your decisions. One life could be at stake, or six billion lives at stake. Betray, or don’t betray. It asks you again and again at what expense you think survival from the hellish, Nevada-bound bunker is worth. But while Zero Time Dilemma pressures you to make hard choices on the spot, it also encourages you to go back quickly—from the fragments menu—to see precisely what you narrowly avoided. Until Dawn doesn’t give you that luxury. You are trapped with any mistakes for the entirety of the game. But Until Dawn wants to be reminiscent of a movie, whereas Zero Time Dilemma wants to craft a narrative full of endless twists and turns that is wholly its own. The ease of going back to make different decisions makes sense for the game, because that string of story still exists. It isn’t overwritten by making a separate choice (as would be the case in Until Dawn).

Seemingly in an effort to impress upon you the gravity of each deadly scenario, Zero Time Dilemma swaps out its predecessors’ mostly stagnant, visual novel style of storytelling for full-length cinematics (sometimes lasting nearly a half-hour at a time with no player input). When something intense is happening, the camera zooms in close to zero in on the horror dawning on the characters’ faces, then it hangs at a low angle, staring up at our heroes. This is called a “Dutch angle,” shot on a tilted axis to evoke uneasiness and tension. Coupled with the foreboding soundtrack that kicks in during such scenes, it’s overall effective in inhibiting the player with the same amount of heightened fear as the characters. Zero Time Dilemma is, after all, a game of drama at the extremes—overexaggerated, shocking, inherently bloody—and Dutch angles hammer that point home. That is, until it happens over and over and over again, detracting from its initial power. Eventually, the overwrought cinematic style just grows tired, especially over the course of the game’s 20 hours. There’s a reason torture porn flicks don’t step over the two hour mark.

As the cinematic style grows old, as does Zero Time Dilemma’s puzzles. For every smart, intuitively designed puzzle, there are three arduous or just plain boring ones. Where the only drive I had to go on was to see more of the story unravel, when a puzzle grew tedious—and not in a rewarding “a-ha!” way when I figured it out—it dampened the game’s spirit, as well as my own as I clicked through the slog. The problem that Zero Time Dilemma perhaps suffers most is its own doing. In most instances, an escape-the-room puzzle would lead to another gruesome ultimatum. It’s these that keep you playing. But sometimes it wouldn’t. It’s a game that’s so high-strung, so superb at tension, that when it doesn’t provide it, the lull feels inexcusably slow. The most memorable and worthwhile puzzle is held in the incinerator room, wherein you try to help a teammate escape what they noted as potentially “the worst sunburn of [their] life.” For once, in the game’s many escape-the-room puzzles, there’s a sense of fear and urgency. In most of the other puzzles it’s disappointingly absent. 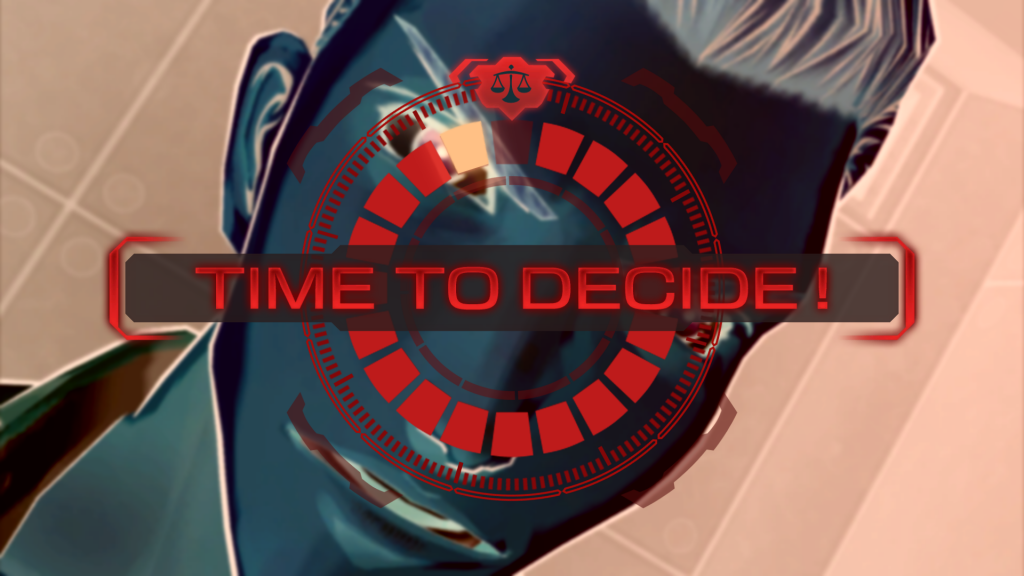 Luckily, Zero Time Dilemma’s story hardly ever wanes, except for a few outlier, minor subplots. Every fragment’s flow goes fulfilled. Despite having dozens of questions early on, by the end of the long twisted journey, I found everything to be resolved—or even left unresolved—in an extremely satisfying way. And that’s just how it is in Zero Escape. Not every history is perfect. Not everyone always survives. Because sometimes, as Zero would say, life is simply unfair, don’t you think?