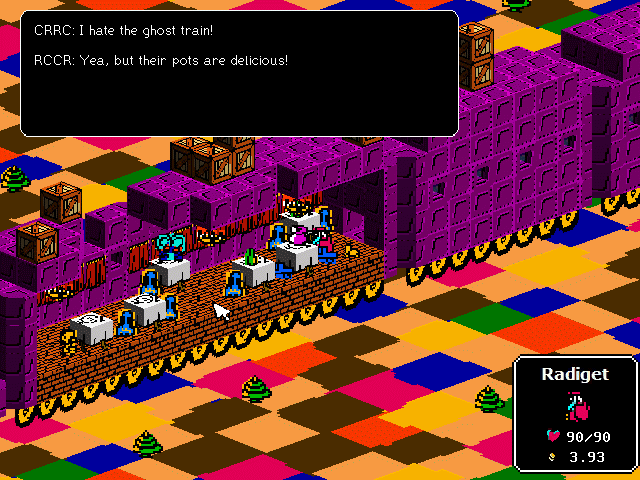 Stephen Murphy, aka thecatamites, is perhaps best known for his parody game Space Funeral (2010). In it, he deconstructs the JRPG by taking the nonsense logic of their fetch quests and oddly single-purpose characters to new extremes. He proves it doesn’t take much for the JRPG to go from a fiction we can accept to an absurd cadaver of meaning. You can tell Murphy has fostered a love for JRPGs, but it’s a love for their encapsulated stupidity, their self-enclosed mania, and it’s this he plays around with. He does this again with his latest game, Magic Wand. It bears all the icons of a Japanese-style RPG; “there are doors and trees” as Murphy points out, but its plot cannot be grasped, and so you move on listlessly from one area to the next, conversing and swishing your sword. A sentient knife says “Cut. Cut.” There’s an entire culture dedicated to digging up pots. It’s as if every character has based their purpose around their immediate form or surroundings, creating a tapestry of unified nonsense. Once, Murphy wrote about playing mainstream games as a kid, never able to understand them, but assuming they were made for a “phantasm audience” who presumably had better taste and knowledge than him. “[P]eople who make these things have Real Jobs and a logo and live in LA, so they must know what they’re doing,” was his thinking. He grew up to learn that this was bullshit; that, actually, they were just bad videogames. With Magic Wand (and his other games), Murphy gives us a chance to experience what he did as a kid, when he played games on the assumption that they had a purpose and meaning beyond his comprehension. You keep on playing, as Murphy suggests, not for the plot, but for the “music and colours.”