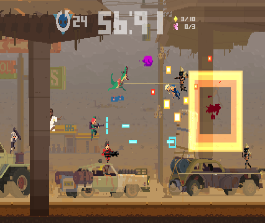 Initially born from the fiery tempest of a game jam, Super Time Force is the time-traveling cousin of Contra that doesn’t take itself too seriously. How not-seriously? Enough that the game encourages you to die, rewind time, and fight alongside your former life in order to double down on your bullet-spewing ability. Useful for taking down a boss or just spewing glowing future-bullets.