Esports is both a competitive pursuit and an aesthetic debate. The former aspect is more obvious at The International 6, a tournament where there are winners and many more losers. But lurking beneath the surface are all the typical aesthetic tensions of esports: the influences of videogames, sports, livestreaming, and other digital cultures. Esport tournaments are interesting in part because they stick lots of people in a room and see how all of these influences come together. It’s trial by fire, but of a visual kind.

It’s trial by fire, but of a visual kind.

If you are to learn anything about the esports at The International 6, then, you can pay attention to the real action, but you could just as easily pay attention to what is being worn by the event’s dramatis personae. While The International may not be the go-to event for budding fashionistas, the clothes on display still reflect its various influences, and the failings of many these outfits reflect esports’ internal tensions. The Meta will be looking at the fashion of The International 6 all week, but today we start with commentator costumes.

By costumes and/or fashion, I mean suits. See, for instance, these guys:

On your left, a man in a dark suit with a shirt-and-tie combo you may recognize from the clear plastic boxes sold at airports. To his right, a man in a dark suit and tie with a rather nifty button-down collar. But, really, we’re talking about men in suits here. Men sitting behind laptops, but men in suits. (Sidenote: the color on the laptop should count as a fashion accessory when considering outfits. Think of it a bit like a pocket square. Anyhow…)

The man-in-a-suit routine should be familiar to the fan of just about any competitive venture. This is the routine of retired players and somnolent sportscasters every weekend during the NFL season and every night during the basketball and baseball seasons. One supposes that the suit is better than wearing some sort of athletic uniform: To borrow a term from soccer, one ought not aspire to being a full kit wanker. Yet the dark suit look is still remarkably unoriginal. Even if a commentator is not dressing up like an athlete, why can’t he (or she) wear something reflective of the event?

It all comes to feel a bit like unwitting satire, which is why images of commentators—including those at The International 6—bring to mind this clip from One Tree Hill:

Look, there’s no need to discuss plot mechanics. The ninth season of One Tree Hill was not one of its finest moments. (I think there may have been a ghost. Don’t ask how I know this.) My point is simply that a teen drama version of the local sports broadcaster looks virtually indistinguishable from the real thing, which in turn, looks all but indistinguishable from major sports broadcasters or their esport brethren.

The picture above, I assure you, is not intended, as satire, but who the hell really knows? Again, we have two dark suits—one sloppily unbuttoned collar and one badly tied tie—and that’s about it. If you’ve ever wondered what it would look like if stock photos worked as esports commentators, this is it.

Esports’ advantage is its eclecticism.

It’s not entirely clear how this problem is solved: Major league sports commentators have had much longer to stop dressing like sales mannequins at tuxedo rental stores to no avail. But esports’ advantage is its eclecticism. Since it is less burdened by history, esports can innovate and be self-aware in many arenas, including that of fashion.

If I may, however, I’d like to propose an alternate way forward:

The above clip is from the venerable cooking show Iron Chef Japan, which wheeled out two very serious commentators to discuss culinary knife fights like they were baseball matches. The pair and their guests did not dress particularly well, but it worked because the tone was slightly different. There was more self-awareness than sports or esports commentary. Put otherwise: if you want to wear a boring suit and tie while providing play-by-play during an event, just go for camp. You won’t regret it. 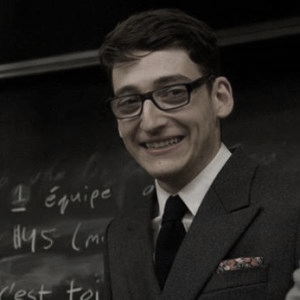