Architect turned multimedia artist Theo Triantyfillidis doesn’t just push boundaries, he collapses them. In the mixed reality experience Anti-Gone, actors’ VR avatars are at once fabricated shadows and genuine embodiments of human drama; in Role Play, his augmented sculpture series, seeming polarities such as the virtual and the physical dissolve into one another; and in Twister, a site-specific VR experience, audience members’ interactions with the exhibit become part of the exhibit itself, inviting them to graduate from passive viewer to active participant.

The breadth of ideas and materials Triantafyllidis employs in his art is only matched by the reach of his creations, which have been exhibited in Beijing, Paris, Tangier, and Santa Fe, to name a few places. We spoke with Theo about 3D-modeling, the desert, sports, and how a given environment impacts the way we make and perceive art. 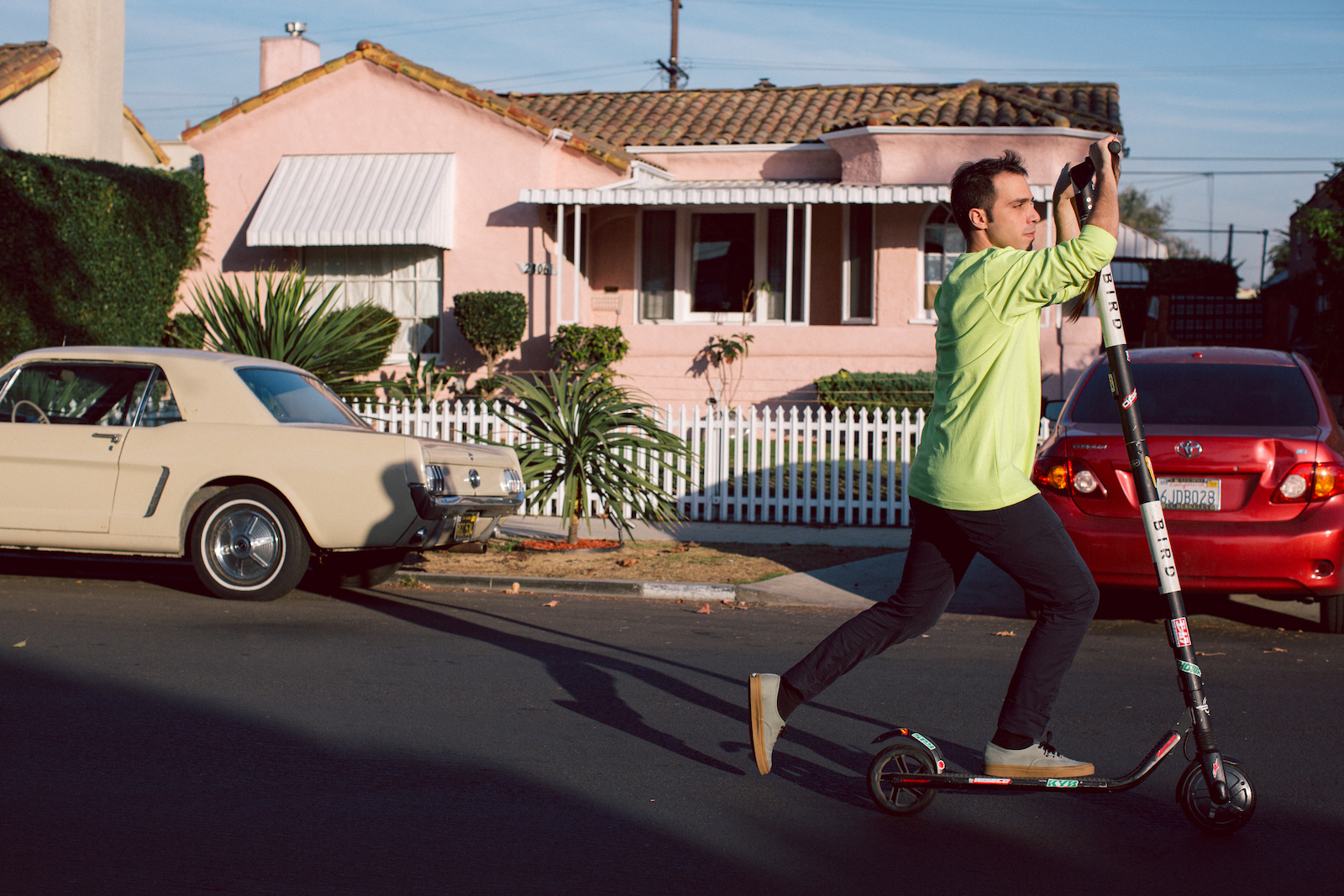 All sports, by definition, are nonsensical. People playing basketball doesn’t make any sense. It all feels kind of random at some level, even though it’s not.

Also, just seeing in the history of video games how many games exist that are great interpretations of physical sports… it’s quite a big production and a long lineage.

For Still Life With Yumyums, it’s important that this is happening right now and it’s a real-time thing. The piece is evolving over time. In this simulated environment, there is a population of these creatures generated randomly when the piece starts and each one is given a randomized DNA. This DNA includes information on how the creature behaves and its overall characteristics. It’s kind of like typical video games—stats, basically: strength, agility, perception, intelligence. Then these are translated into their way of understanding the world around them, the way that they can move. The DNA also includes information on how they look and what kind of mini-objects they are composed of.

“It’s important that this piece is happening right now and it’s a real-time thing.”

It’s interesting, given a lot of the conversations about the limitations of our planet, and very Malthusian. Are you creating these objects from scratch?

With my personal way of working, I’m not going to sit and 3D-model something unless it doesn’t exist out there. I think it’s also a good way to push me to not spend time making something that’s very cliché or exists hundreds of times out there. It’s more like, “Let’s try to make something that is really strange.”

Here, everything is happening procedurally right now. There is a library of fifty or sixty objects. Some of them are more static and some of them have behaviors attached to them. The hand is looking for things to caress and poke and slap. The knife is looking for things to cut. The small animals are trying to avoid danger and stay out of the way of whatever is happening. 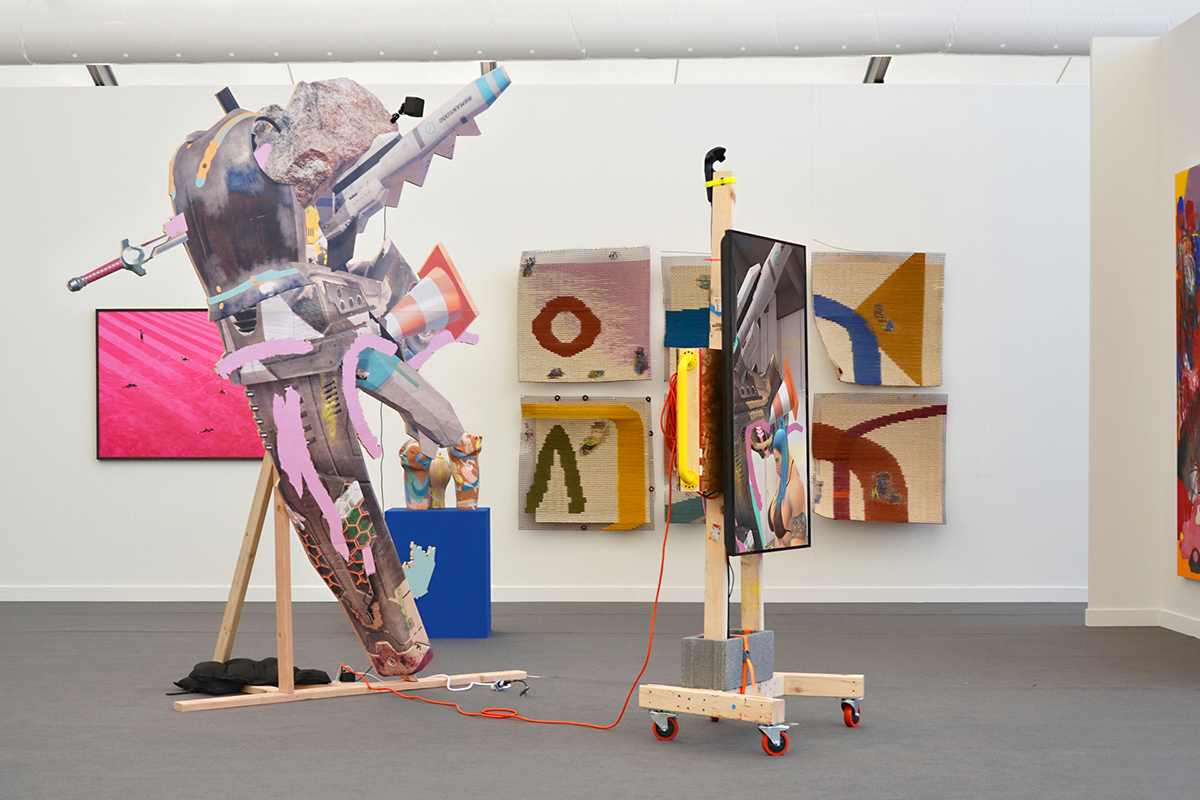 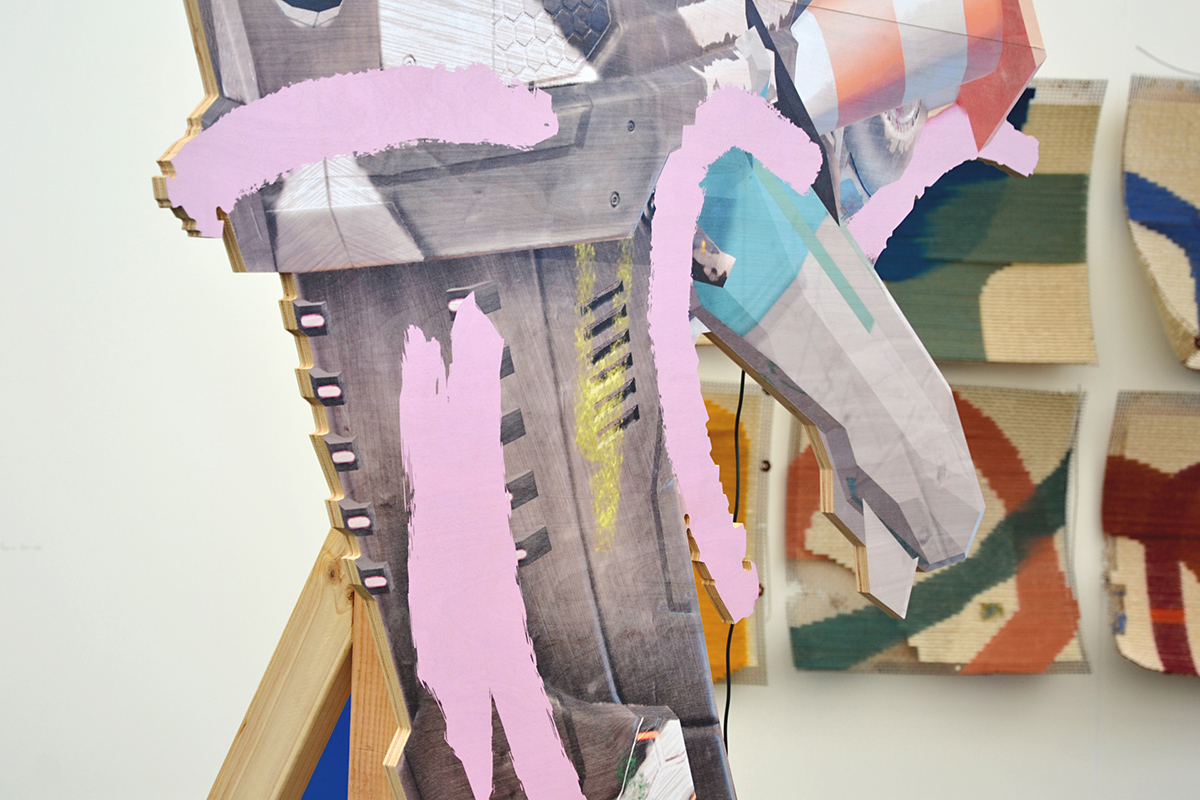 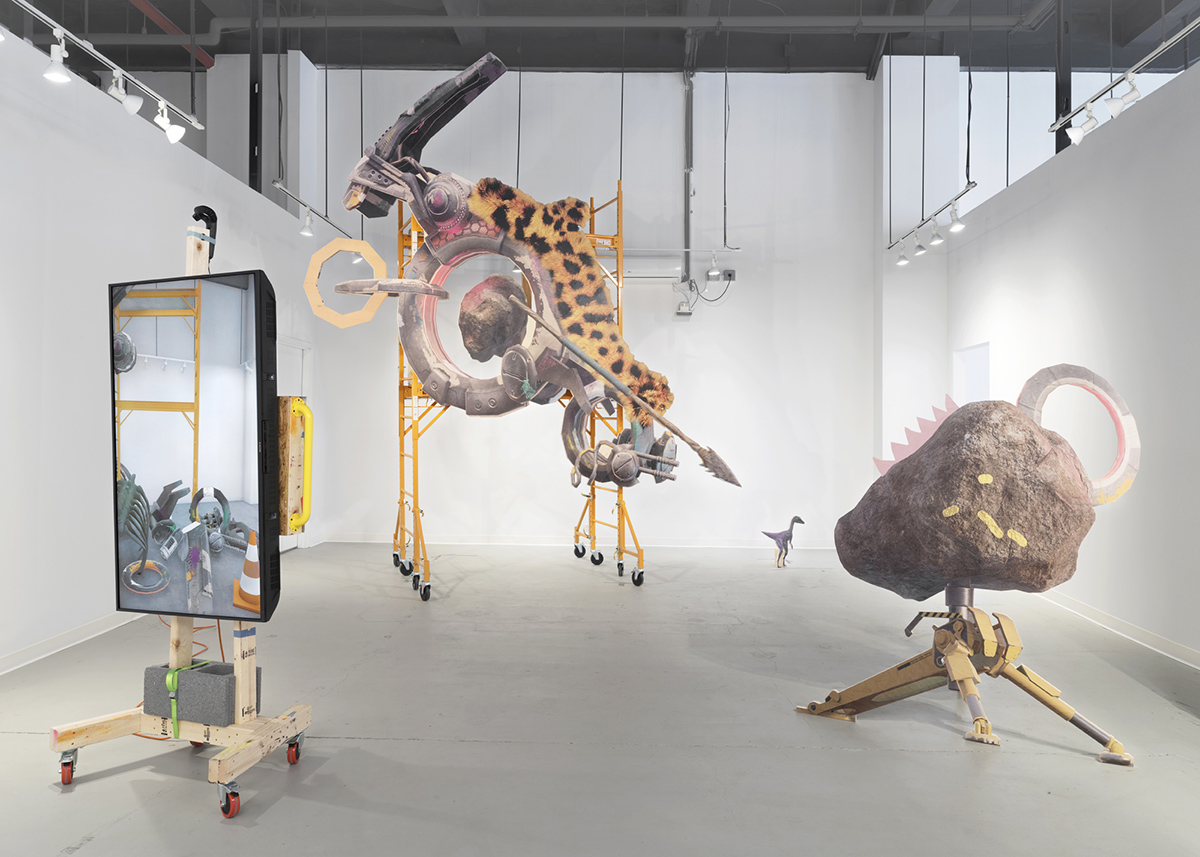 Triantyfillidis's "Studio Visit," a site-specific mixed reality installation (above) and "Nike," an augmented sculpture (below).

Is this similar to the previous piece where the machine is creating the environments?

Yes. There is the first part that is trying to make visually interesting compositions with the randomly picked objects. Then, the static composition is left to do its thing because some of the objects are alive. Some of them are going to stay where they are, so it’s a completely dynamic composition.

Also, I think there is a very specific way that people edit videos on YouTube for maximum attention-grabbing, so I try to decode some of these editing techniques and use them here. Originally, I decided to use YouTube as a platform for sharing all this work, sort of like having an extended preview of all these works online because I like the idea of people randomly stumbling on them.

On the one hand, the beauty of digital art is that it can be shared widely, in a way that physical art cannot, but you’re also working in a context where scarcity has a value. This puts artists like you in a very tricky spot, where the promotional value of availability is still very high.

The nice thing about this kind of simulation work is that, on the one hand, you can have a ten-minute preview on YouTube, but, on the other hand, that’s not the actual work. It’s good enough for someone to understand what the piece is about, but also good for a collector to be like, “Oh, I have the software that can produce endless hours of this.”

“I think the nice thing about this kind of simulation work is that, on the one hand, you can have a ten-minute preview on YouTube, but, on the other hand, that’s not the actual work.” 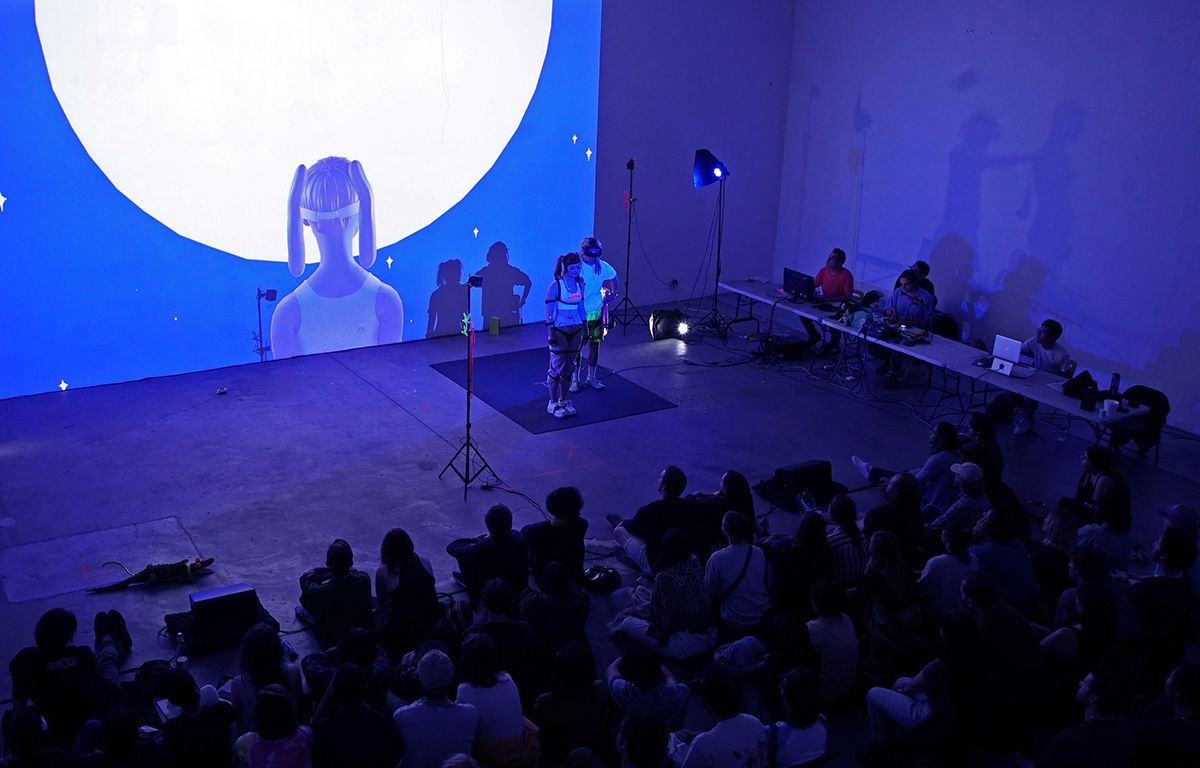 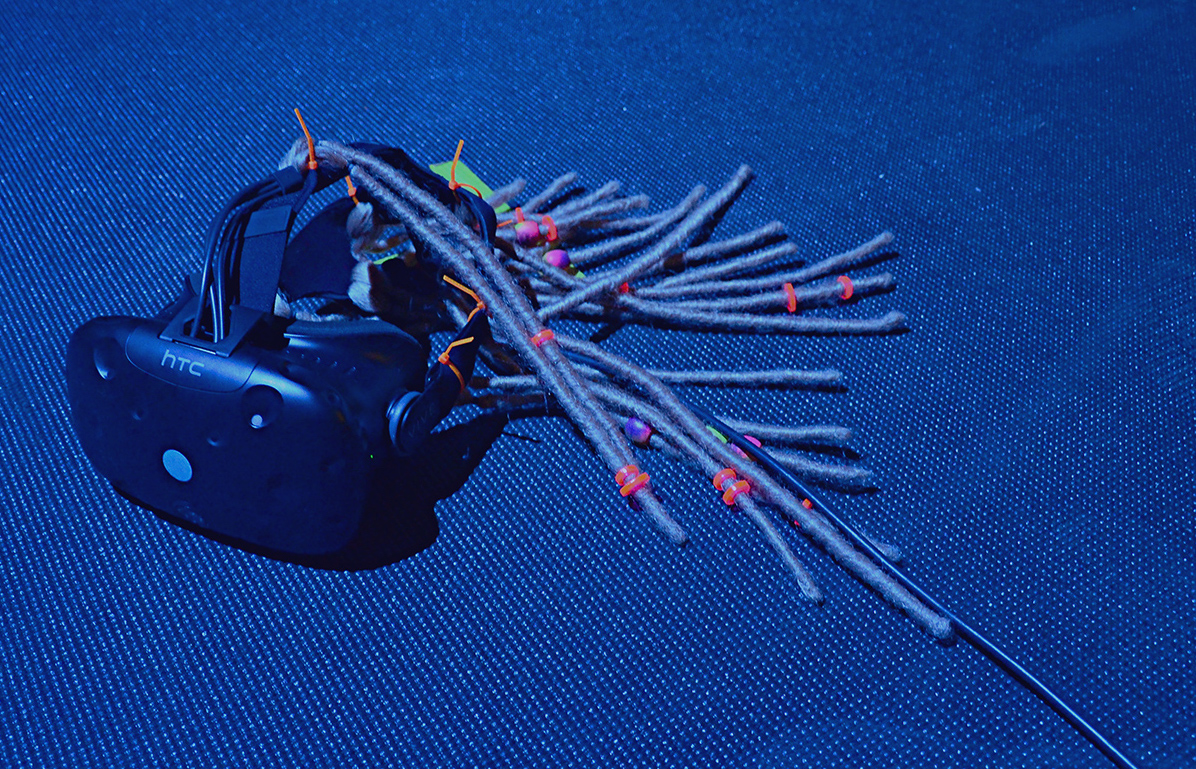 The way I like to think about it, and the way I’ve tried to structure my practice, is that I have some work that is meant to be shown in a gallery and it’s protected by scarcity, in a way, because it’s a physical installation and I can’t practically make too many of them. On the other hand, I like to have at least one or two interactive experiences that are available for free online and where people can experience the whole thing.

Fundamentally, that’s the difference between game design and what you’re doing as an artist. There are game designers that are like, “I want to sell this thing and, if I want to use Twitch as a marketing vehicle, I have to create something to support it.”

Yeah. You never get that kind of engagement from an art audience. Nobody is ever going to actually talk about the work in that very elaborate way.

The piece that you saw earlier with my self-portrait was also for VR, originally. Staphyloculus is another VR piece for which I went out to Joshua Tree and took the whole VR setup, headset, trackers, computer, and power generator. Then I did a quick 3D scan of the area using a DSLR and a drone, and finally placed myself in the same exact position in the reconstructed scene. It was more like a mind experiment to see what happens when you are in this simulated world, but you still get the physical sensory input. 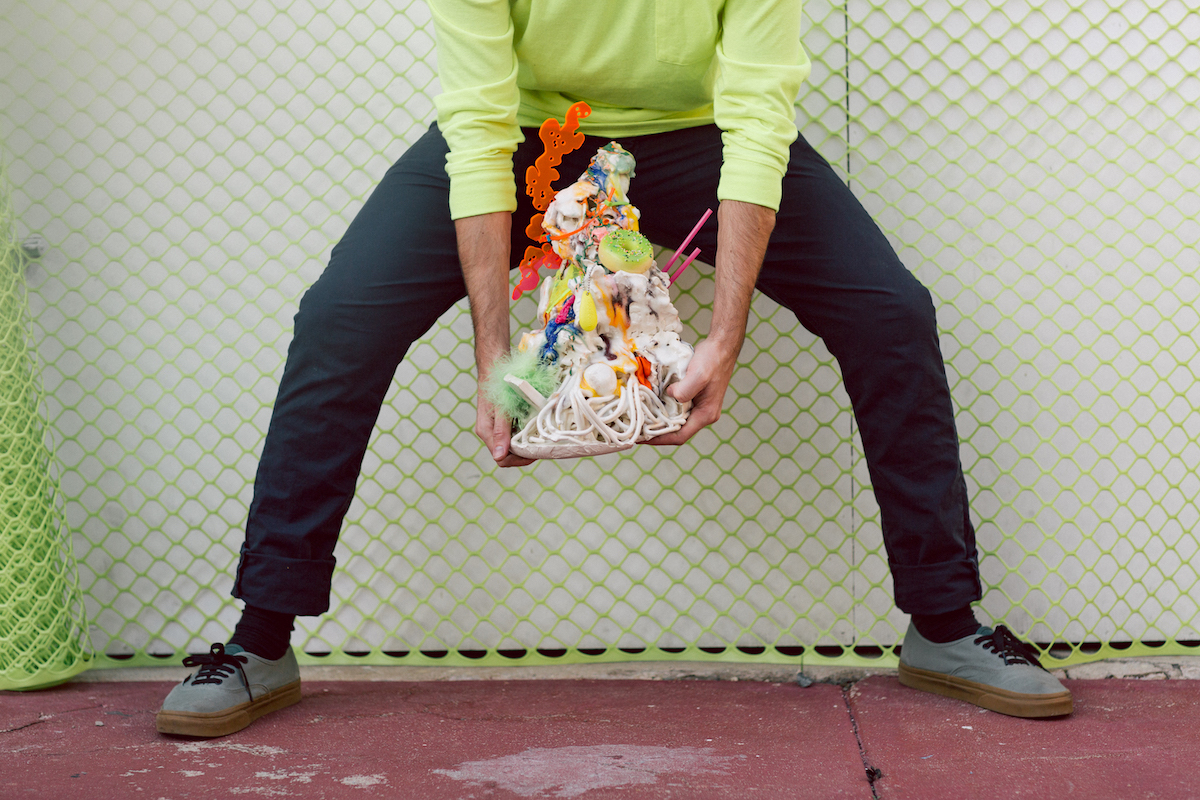 Triantyfillidis with his sculpture "Mountain" (made from ceramic and laser-cut acrylic).

So much of immersion is obviously visual, but we also have all these other senses that can be powerful for creating a sense of realism. So, feel the crunch beneath your feet.

And the sunlight burning your skin… that kind of stuff. Then there are a few other things going on in there. There are these creatures that will start attacking you.

This began as an experiment of me doing that, and then I tried to recreate the sensations that I felt as a stand-alone VR experience that someone can see somewhere else, but then a lot of the experience itself is informed by this original experiment. Another important aspect of the project was these pink creatures and thinking about embodiment in VR and how, by default, you don’t have a body and are this floating camera in the world.

In the beginning of the experience, you don’t have a body and you are just standing there not knowing what to do, and these creatures will have pretty elaborate behavior, where they are shy in the beginning. They will look at you and, when you try to look at them, they will hide and will keep doing this for a little bit. Then they’ll start attacking you and attaching to your body.

After a while, you become this amorphous person and then, after a bit of playing with them, they are fully, physically interactable, so you can play with them. Then they will start popping off and disappearing. And then you’re left without the body again. 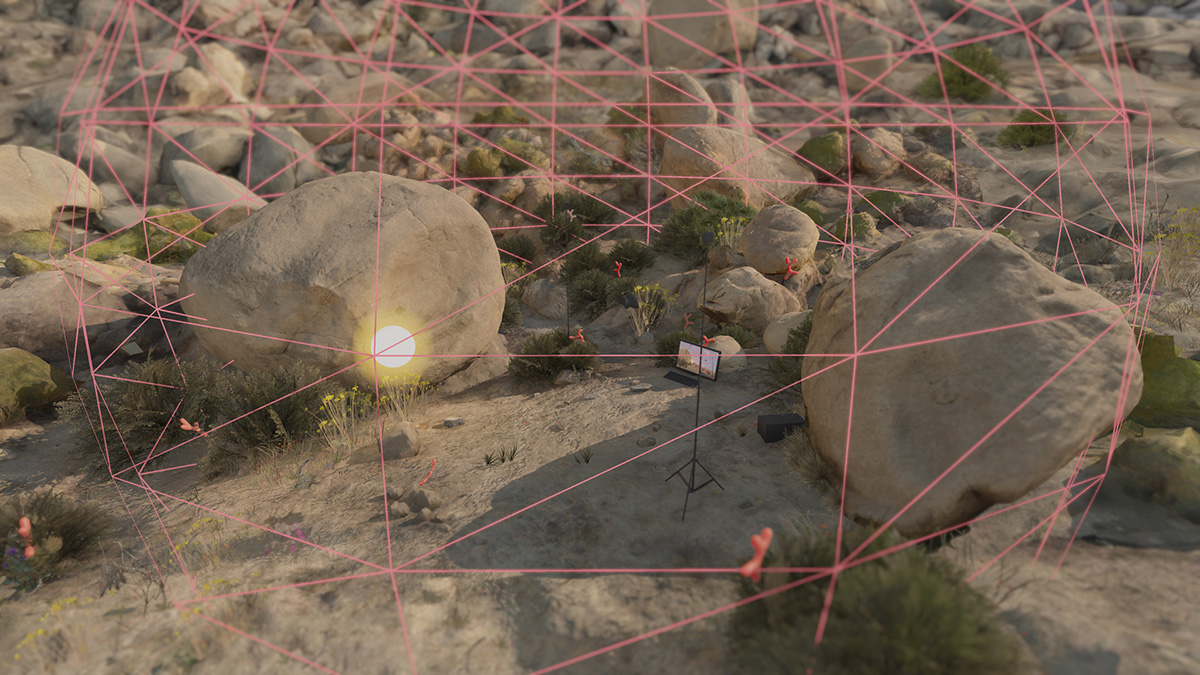 Triantafyllidis's "Staphyloculus," or "The Paradox of Site Specificity of Virtual Realities."

Recently, in 2018, I did this whole series of works as this Ork avatar. I designed this avatar for myself and set up a virtual studio in VR, kind of influenced a little bit by a particular paint brush and these kind of VR experiences.

Basically, I made my own tools for working in VR and for six months I worked inside VR, in this virtual studio building a bunch of sculptures. The sculptures are also made from found 3D objects and new objects that I made, which were then physically printed on plywood as these 2D cutouts.

I designed it in a way so that when you would first enter the gallery, you would maybe for a second think that they are three-dimensional.

Then I made this portable display unit, which is for looking at AR on your phone. This whole monitor is tracked with a VIVE controller, and people can drive it around in the space.

I have done a lot of shows with VR headsets, but I kind of hate how they operate in the gallery, how people have to wait in lines to see them.

So this gives you a sense of it not being as “immersive” as everybody wearing a headset, but it’s a great way to show the work?

Yeah. In the virtual scene, there is a motion capture recording of me creating this sculpture, as in my avatar. 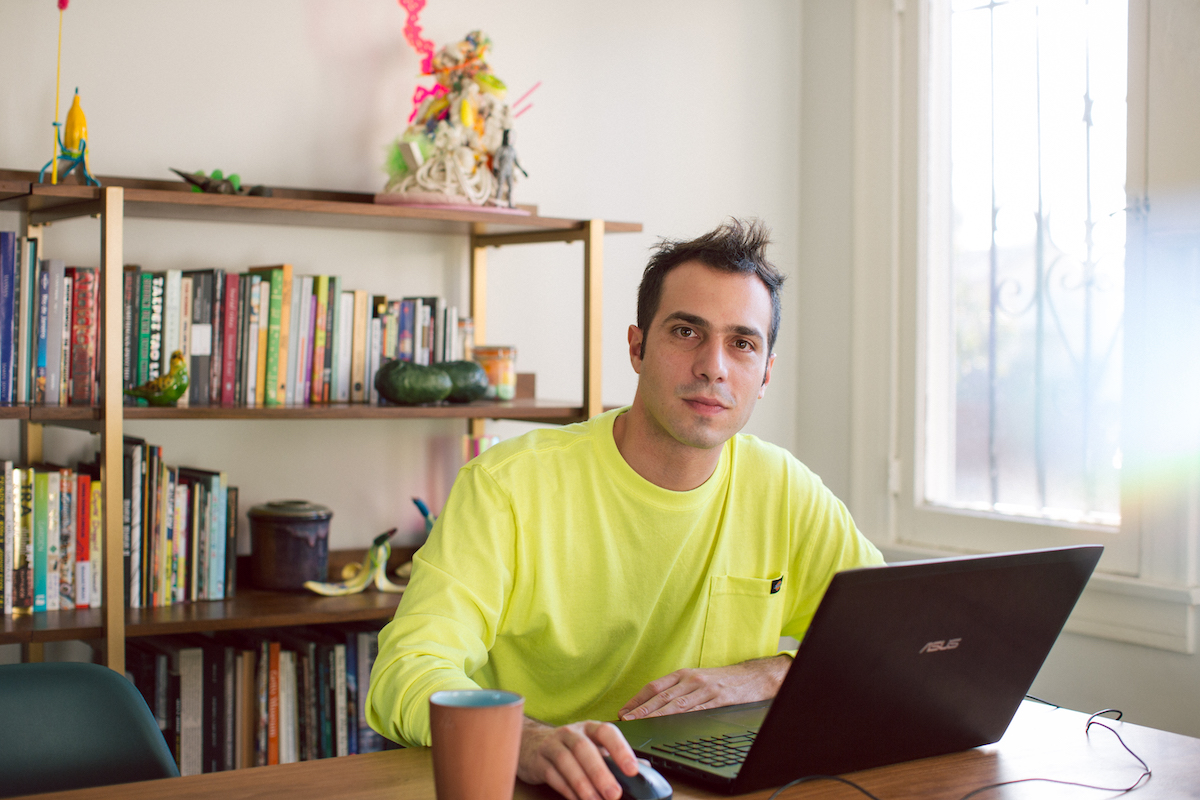 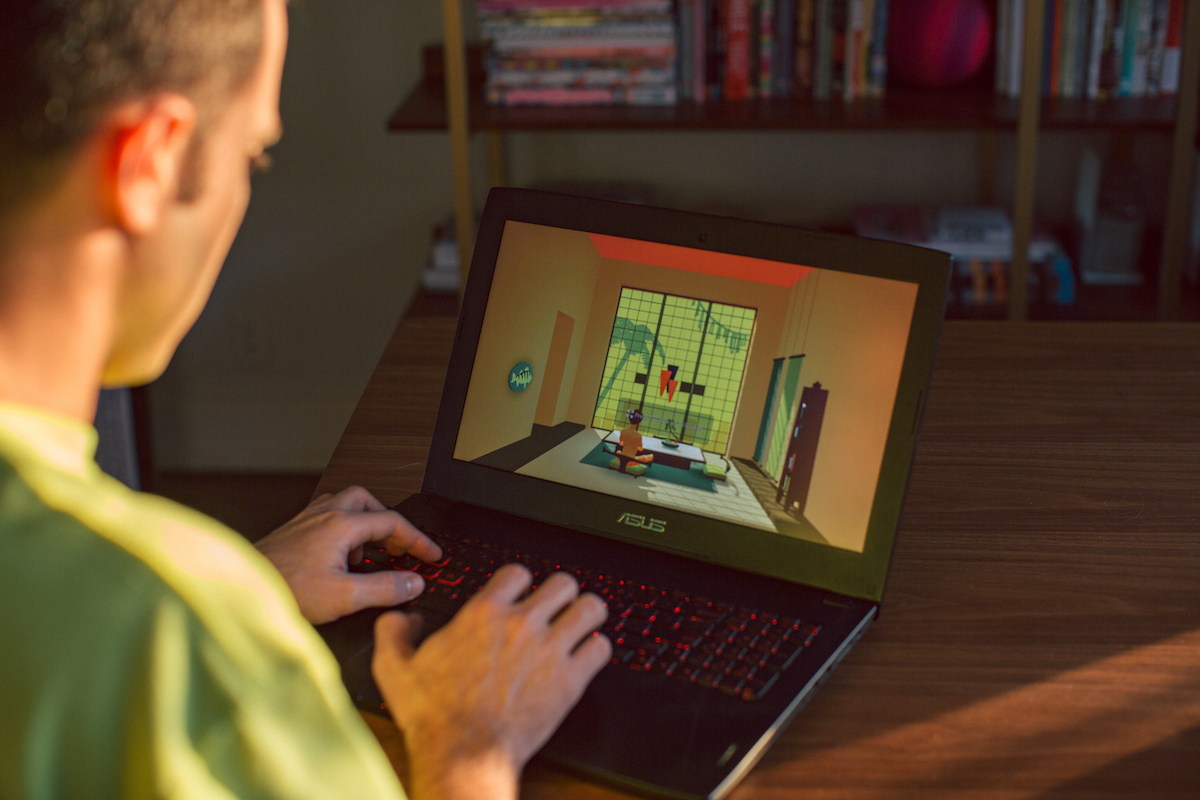 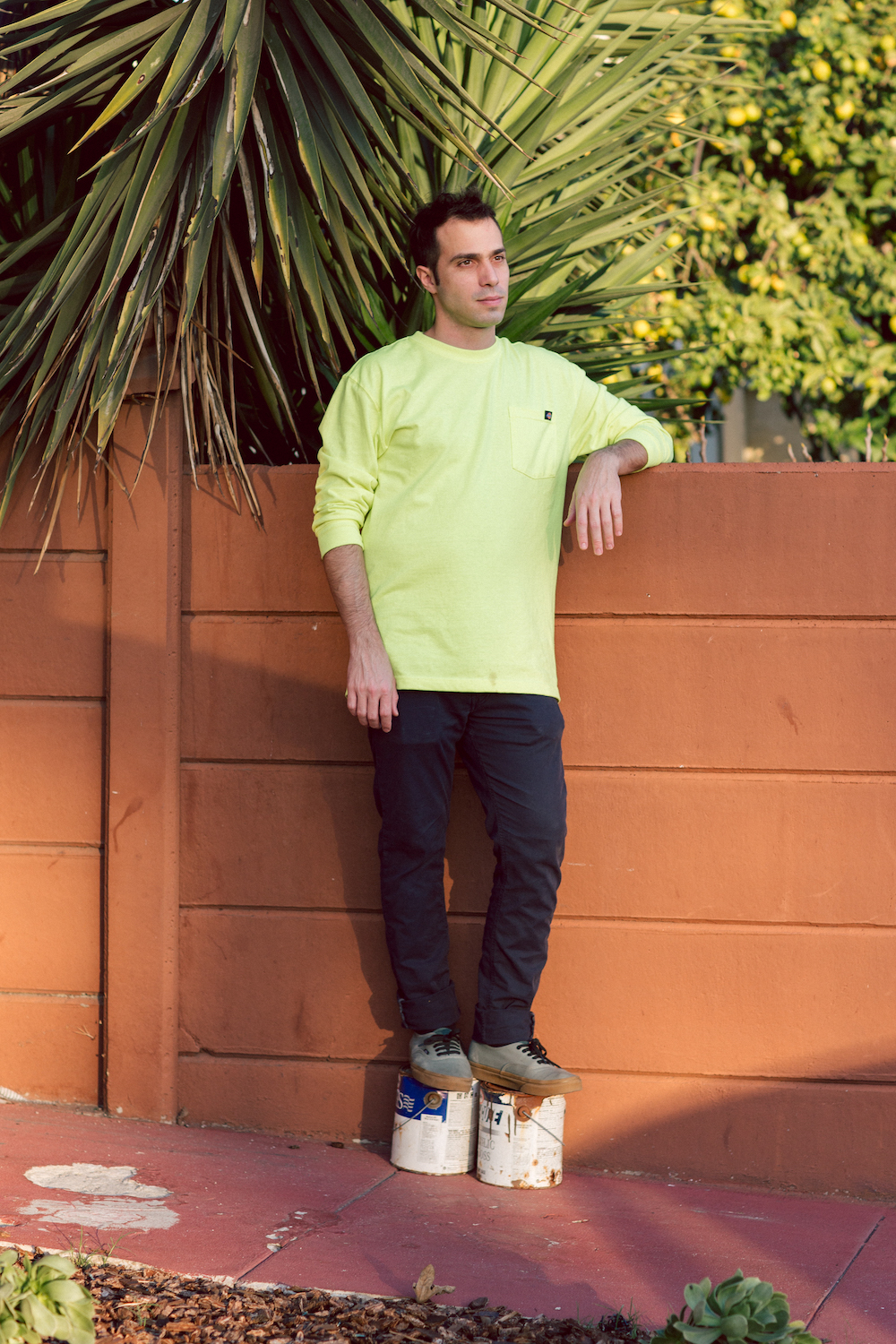 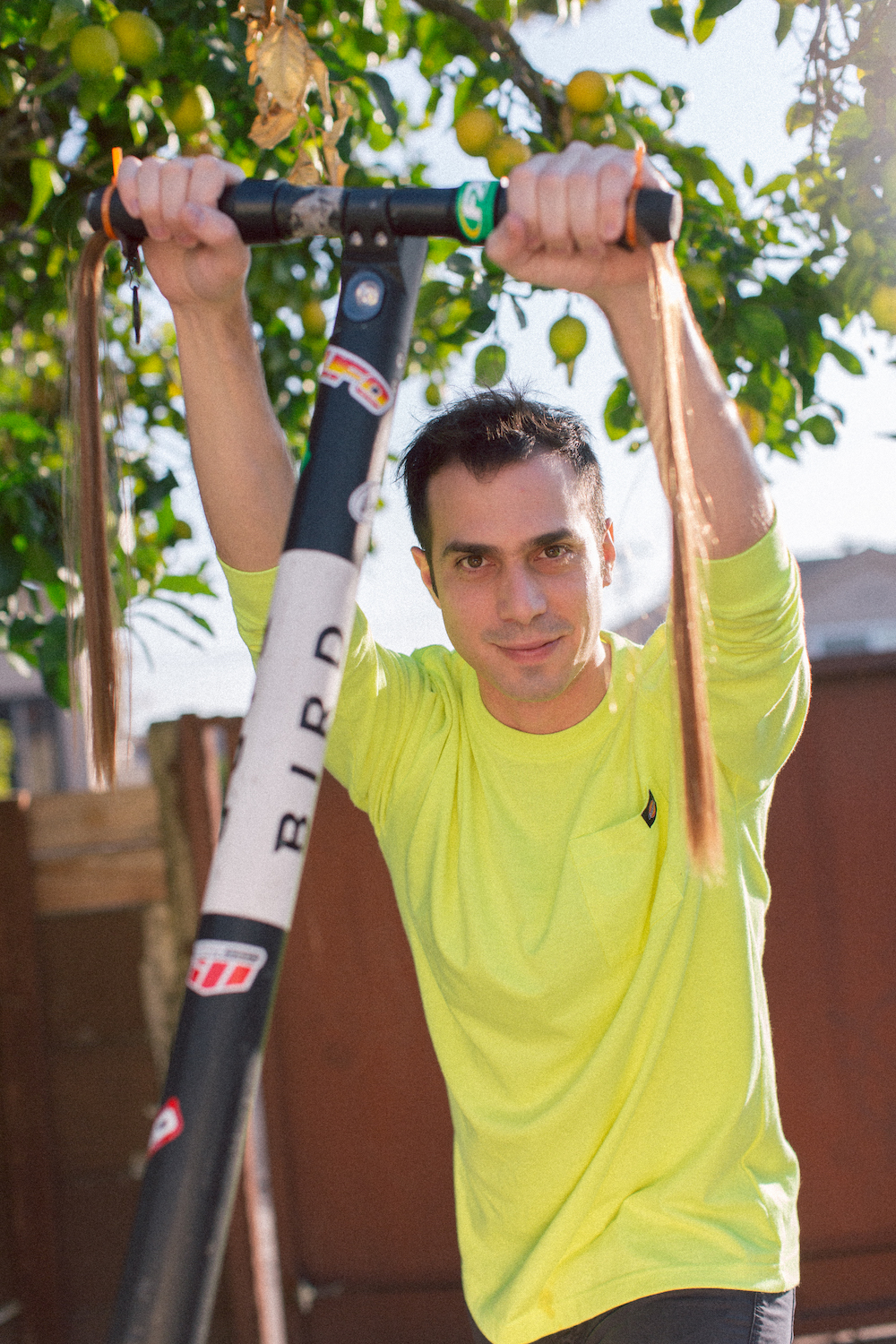 Basically. It’s a little bit of hide-and-seek because I am moving a lot in the space, so you have to constantly be looking around to find the character and then you also see the process. There’s a whole narrative that I am talking through.

Yeah, and then I make a painting.

There is a little bit of art theory in there, and then the painting is recreated to scale, one-to-one, and printed on plywood with some layered things. Then there’s the video of it playing.

I always like to consider how the work operates inside a gallery or inside a popular viewing space. None of my other VR works have that physical installation component to them, but are more about choreographing the player to do something interesting for the others to watch. For the one in the desert, people will do really crazy stuff with their bodies when they’re trying to play the experience.

Anti-Gone is what I am currently working on. It’s a Mixed Reality Performance. I see it as a mish-mashing of the ideas that we talked about, but presented live in front of an audience. There is something super interesting about game engines and real-time graphics clashing with a live performance.

It’s an hour-long performance and it’s based on the comic book by Connor Willumsen. It’s a complex story very related to virtual reality and this idea of constructed environments. It’s set in a post-climate change world, where a city is halfway submerged into the ocean and tropical vegetation is overgrowing the city because of the extreme heat. It is premiering soon at Sundance New Frontier. 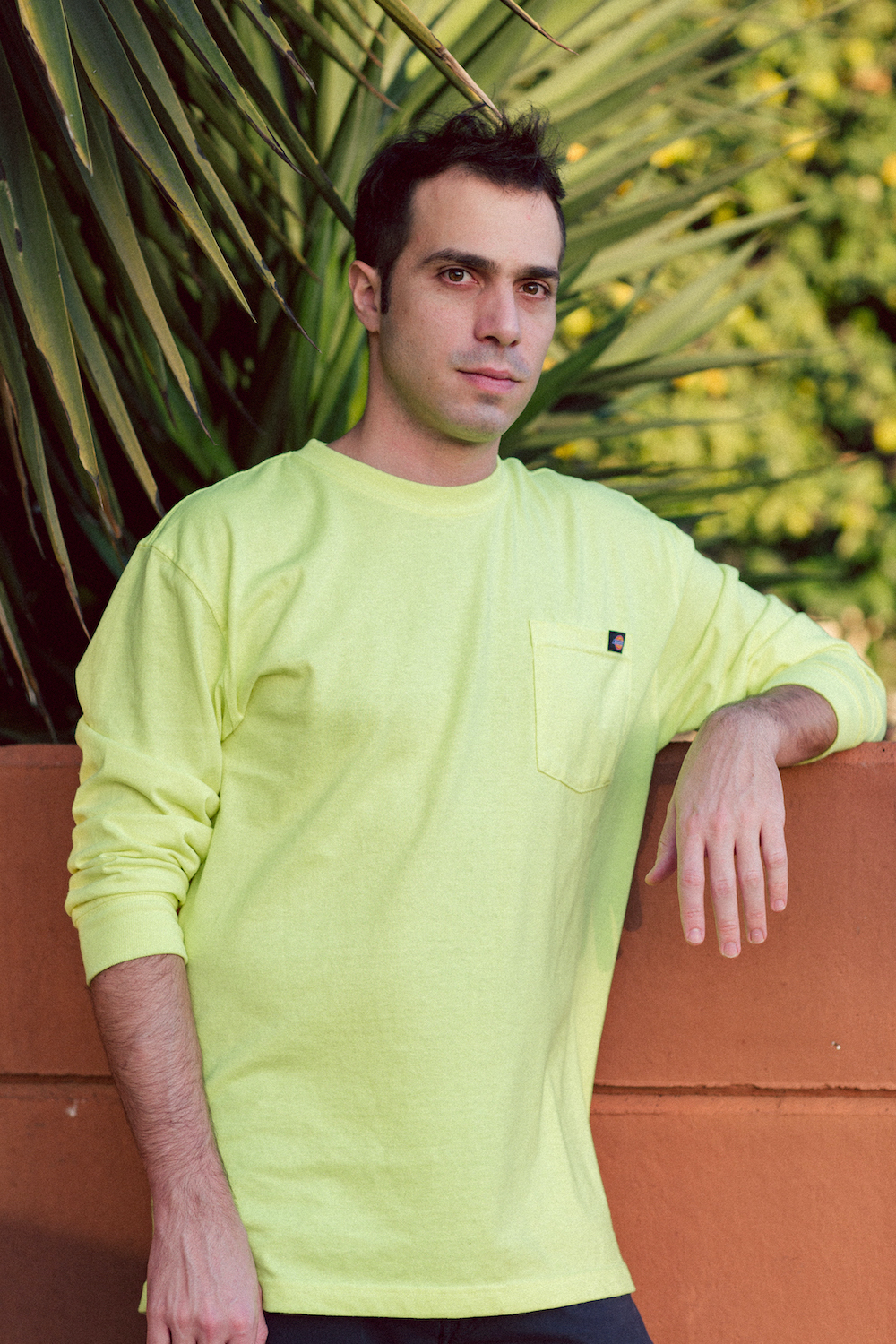 The Swing and the Super Ball

The Concentric Fictions of a Generous History