It typically begins in POV, archetypal male body—glistening, devoid of hair, boxers coyly hiding a bulge—seen from the nipples down, lying supine and motionless at the bottom of the screen, implying that this is your body, your blood, your rapidly engorging member.

If you tilt your head up, you’ll see the ceiling; down, more of your body, more context as to how your nipples take up the precious skin-scape of your baby-smooth pecs; right or left you’ll see a vase or a workout bike, a bookshelf or an ottoman, subconscious cues that your “body” is lying within a nondescript room, one that offers such a vague but clean sense of place it could only be “California.” As in: the place Anthony Kiedis is always singing about.

In this case, as in most cases , your view is technically limited to 180 degrees, though it amounts to more of a fish-eyed rectangle, concave, with all of the bookshelves and Buddha statues and windows and house plants at the edges of the frame diffusing and slightly warping away from the center of vision. Out of which—just as you are getting your bearings, just as you’re able to figure out how your body belongs to and interacts with this heightened reality—emerges the person who will fuck you.

Behind every great technological advancement are two people fucking. If the daguerreotype was invented on a Sunday, then by Monday someone was using it to chronicle some hot-and-sticky 1830s coitus. Imagine two awkwardly assembled meatbags posing interminably while they waited for the exposure time—in some cases as long as 30 minutes—to lapse, wallowing in the pain of artifice for our pleasure.

As soon as any “thing” becomes a thing, it will almost certainly be used for pornographic purposes. From the camera obscura to Chat Roulette, in time every epoch-ushering technology follows suit, putting the greatest minds our world has ever known to the task (indirectly or not) of condensing, compressing, and disseminating the luxury, the fun, of voyeurism as an end unto itself. As NPR, bastion of worthwhile knowledge, once postulated in 2003: “Is Pornography Driving Technology?” You’re goddamned right it is.

The progress of technology, broadly, is measured in connectivity. The more our access to media, to knowledge, to each other is strengthened, the more comprehensively, exponentially even, technology broadens our individual views into the one-time unattainable corners of the world.

It’s natural, this progress: The only things with which we are more fascinated than our own bodies are the bodies of others The ways in which these “other” skin-sacks come together, are used, are exploited, are manipulated or developed or simply carried, flicked, poked at, bobbled from hand to hand. It’s how we understand our corporeal essence—by knowing where “I” begin and where “you” end, we get at the limits of self. The bigger the world gets, the clearer we see how we fit—both physically and emotionally, the latter an extension of the former—into this ever-massive place.

But NPR’s assertion that pornography is irrevocably tied to technology isn’t so revelatory anymore. Especially because, today, with perhaps greater social aversion than ever, the world at large seems to understand the indelible connection between money (of which the pornography industry has and will always have a lot of) and access to technology. On some level, you probably know this—you recognize that the only way for porn to move forward is to draw people together, to provide more and more venues for people to live out the ordeal of fucking without making them navigate the emotional terrain of physical intimacy.

Virtual reality then seems like the logical next step in bringing viewers into the experience of having consequence-less consensual sex with strangers. With the Google Cardboard setting the stage for an already oversaturated field of affordable VR goggles, and with the ubiquity of smartphones meaning that practically anyone can at anytime, anywhere watch two people fucking, VR porn—finger firmly pressed upon the pulsing G-spot of consumer expectations—is very much a given. (Do G-spots even pulse? Am I doing this right?) But that doesn’t mean it should be.

Assimilation into the body of the headless humanoid on your screen is already, before you even enter the virtual realm, a physically awkward circumstance. And so, you must adapt to the shock of your new corporeal circumstances quickly, because your libido is already strained, extending from the mysterious core of your body-wearing-cardboard-goggles through your phone and into the body-lying-corpse-like-atop-a-virtual-bed-or-futon-or-leather-couch. If you listen closely enough, you may be able to hear the creak of leather, immediately adding cognitive dissonance to the experience, because as far as you can tell, there is no movement in your lifeless digital person to warrant any leather noises.

That is the extent of it: You will be fucked. You will do no fucking. Thrustless, flat on your synthetic back, what you can see of your chest rising and falling calmly (the only proof that this version of you is “alive”), your head swiveling around to take in as much of the digital space depending upon how interested you are in what’s happening directly in “front” of you—agency isn’t even an illusion. It’s non-existent. To hear a porn star coyly ask, “Do you like it?” or, “Is this what you want?” is more frustrating than titillating. It doesn’t matter what I like or what I want.

In this VR space, I am a passive sex doll bent wholly on autonomous responses, a dreamer in the midst of a lucid nightmare, unable to move yet hyper-consciously aware of what seemingly nefarious goings-on are happening around me—what’s happening to me.

That sense of helplessness grows if you attempt to look away. Lift your headset to the ceiling or crane your neck to catch a glimpse of some detail of the room left unexplored behind the convolving nodes of flesh apparently writhing on top of your comatose body, and you’ll never be able to escape the person fucking “you.” Even if the field of vision somehow (unintentionally) allows you to only see the tip-top of the head of the person on tip-top of you, or only the occasionally outstretched hand or foot, there is no respite. You may be able to ostensibly look away, but the evidence of what’s happening remains at the fringes of your field of vision.

Sometimes, too, there is a mirror on a distant wall, reflecting the soulless act directly back at you, but from a heretofore unexplored angle, like Duchamp’s nude descending the staircase onto a dick. Let alone ignore, you cannot deny what is happening on you, with you, to you.

And yet, there is still the long Cronenbergian phase through which we must pass. For VR porn, body horror comes in “full 360,” in which you are able to see completely behind “you,” hilariously avoiding looking into the eyes of the digital person fucking you while sorely aware that this is not how bodies work, that this “person” gyrating on top of you should probably be terrified by the Exorcist spectacle contorting through the lump of flesh on which he or she (usually she) sits. Body horror is tipping your headset and phone totally to the side, as if your digital ear is connected directly to your digital neck (represented by an opaque-black hole at the bottom of the virtual field), the person on top of “you” again not reacting to the black magic present in the room. Body horror is the deep-seated knowledge that this vessel, which carries you through this universe, is the only one you have, and that it is infernally, reprehensibly weak, archaically fragile, and will always be disappointing.

But then, the normally sedate arms of your digital self lurches, as if shaking off a weighty dream, and reaches up to grab the waist of the person on top of “you.” It is not something you expect, nor is it in the realm of what you—the mostly clothed person with your pants around your ankles, a cardboard pair of goggles on, your “VR face” a stereotype of slack-jawed shamelessness, unmoored from the reality in which such an image is depressing—wanted to do in that moment.

Instead of reminding you, the passive viewer with cardboard on your dumb face, that the moment was meant to be transportive, to trick your mind and hopefully your body into arousal, it shakes you completely out of the moment. The VR porn vid has gone too far. In feigning control, assuring you that no, your digital self is more than a narcotized slab of beef on top of a lavender duvet, those two moving arms only emphasized the horror of disappointment. This most definitely is not your body—your real body is the feeble, somatic lump with its pants down, and this is the only reality you will ever know.

Sex isn’t cannibalism. You don’t become imbued with the powers, hopes, dreams, and feelings of a person if you have sex with them. But sex can facilitate such a connection. It can provide our sense of self with the best basest understanding of what that means—where I end and where you begin. It’s an imperative, so this will change. In time.

But for now, though much of you is revolted, even terrified, by what’s happening within your cardboard goggles, you finish. You wake from the nightmare, realizing that maybe you should have turned off your light-sensitive settings on your phone’s screen. You flush what you’ve finished into down the toilet. You delete what remnants you can of the video and website from your phone. You pull up your pants, suck in your belly, and notch your belt. You accept yourself; you are scared by yourself. Life finds a way. 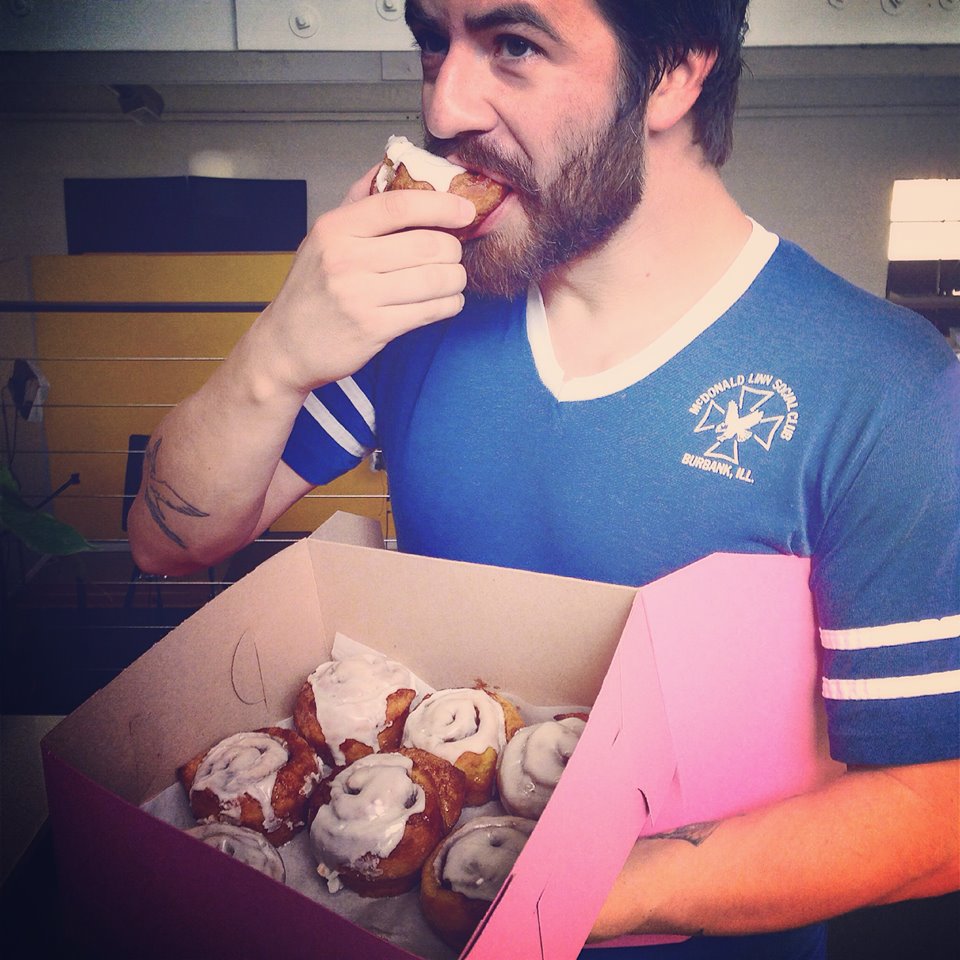