The hyperreal bodies of an avant-electronica stage show

Seated behind a curtained table and a tangle of Apple cables on stage, the artists of Pupture—among them Matthew Lutz-Kinoy, dance duo FlucT, and music producer/ringmaster SOPHIE—took turns presenting their work to both the audience and, it felt, to themselves. Though obviously choreographed and planned, the performance had a bit of the casual feeling of friends elaborating on a theme and sharing their results in the moment. It was the sense of a strong set of concepts being worked through, rather than a total, completed statement or argument that defined the show’s brief run time.

Pupture was described on its Facebook event page as both a “consideration of the role synthesis plays in a work’s creation, structure, and meaning,” and a “panel discussion.” Each of these terms accurately capture the feeling of the event, an exploratory meeting of practices and aesthetics which benefitted from happening in the intimate environment of the New Museum’s downstairs lecture space. Dizzying, absent of preparation or definition, and full of moments and performances that were at times difficult to sort out or identify, it was a sometimes frenzied experience packed with ideas, details, and intimations of future work.

Collaborations were formed, and then branched off into moments of isolated performance. Ideas overlapped, then splintered, incorporating sound, dance, spoken word, video, gesture, text, and even ceramics into a constantly shifting whole whose ultimate statement—though hard to put into words—was felt and remembered as a series of refined sensations. That said, a companion packet distributed upon entry, featuring art and text by Henrick Oleson and Gerry Bibby, did an admirable job of describing the event through language. It managed this partially by employing fragments related to the life and tragedies of Alan Turing, alongside near-cryptic statements such as “They say never wake a sleeping Bear,” and “How do I make myself a body”.

All of this scattered content felt appropriate for a work at least partially defined by the involvement of SOPHIE, one of the more recognized members of the life-warping music label/Soundcloud channel/lifestyle brand PC Music. The work of PC Music is hard to describe, but easy to recognize: high gloss, post-kitsch, both humorously cheesy and deeply melancholy, sometimes confusable with branded content. Their boldness, combined with a typically explanation-free presentation, has led to infamously divisive reactions: a cursory Google search unearths an endless, circular media narrative debating whether or not the group is the “worst thing ever” or actually “for real.”

That question of realness is apt. Interacting with the PC Music family can feel like an ongoing piece of augmented reality, which makes their adventures into performance art and staged events possess a deep kind of sense. From their Pop Cube experience (branded by Red Bull Music Academy) to the live action commercial of QT, PC Music’s sensibility always seems about to spill outside the container of any one format. The too-perfect photo designs of Diamond Wright are just as much a PC Music product as any of their singles—one senses that this is part of a larger mission to retouch the world entirely.

Pupture is rooted in this personal-maximalist sensibility. From the opening moments of SOPHIE ‘asleep’ on a pillow beside his laptop, while an alarm tries to wake him, followed by the producer miming to a pre-recorded spoken word piece riffing on vision and the color violet, we’re in familiar PC Music territory. However, as this gives way to Lutz-Kinoy’s verbal segment, anchored by a description of Okinawan pottery, and then what appeared to be the details of a journey to the island of Okinawa itself (gesturally described by the artist through “rowing” an invisible boat), the field of play seemed to become larger. Lutz-Kinoy even sent examples of the ceramics through the audience so that we could touch them, and the tactile element of this helped to broaden the evening, if only slightly, beyond performance.

Throughout, the show’s segments—whether collaborative or discrete—were held together by SOPHIE’s compositions. This found a natural pairing with the choreography of FlucT (dancers Monica Mirabile and Sigrid Lauren), which charted its members beginning to move separately (on stage, playfully sticking their tongues out at the audience), slowly combining it with physically moving through the stages of an almost animal kind of ecstasy—one passage had the dancers on all fours panting like dogs. The intense gestures from Mirabile and Lauren were matched by a percussive, plastic noisescape, which built to a strobe-light delirium of rapid motion. Throughout this, Lutz-Kinoy’s stated yearning to “escape the body” hung over the show space, and this, even more than the near-constant musical accompaniment, seemed to clarify the meaning of the night.

One of the event’s most concise pieces was also one of its most simple: a video projection shown behind the lecturing table, which featured a shirtless, seemingly male dancer moving to some of SOPHIE’s music. The dancer (credited as Mels Boyer) is seen only from the neck down, making them somewhat anonymous; and yet their dancing is expressive, full of personality. The sensation of watching the video was as if we had been given a tutorial, or a private vlog, from a minor corner of YouTube—something unintended for wide viewership. The apparent privacy of the moment (one dancer, alone in a nondescript room), whether staged or not, gave the performer a heightened sense of vulnerability, creating a powerful combination of both elation and loneliness in their movements. The dispassionate way that the artists looked up at it from their table, as if it were part of a PowerPoint presentation, made the moment seem slightly, quietly unreal.

SOPHIE’s work can at times seem to exist in the same Venn diagram as Spring Breakers (2012), Takashi Murakami, Lana Del Rey, and Metal Gear Solid—contemporary pop cultural touchstones whose function is wrapped up in publicly dismantling the same qualities that define them as part of their culture. However, SOPHIE comes across as less calculated and more sincere than most of those things, and it is this sometimes awkward sincerity, at times stepping over into naivete, that activates his haters as well as lovers.

Whereas most PC Music affiliates—A.G. Cook, Hannah Diamond, GFOTY—create work that is largely identifiable as pop music, SOPHIE’s compositions tend to use pop as a starting place from which to move into knottier directions. In a track like “L.O.V.E.”, a very ‘pop’ refrain (the verbal repetition of the letters L O V E) is used to sweeten an otherwise aggressively harsh and metallic sound design, which then opens up into an overactive, bubblegum-kawaii sound, and teasingly brief bridge. Even more conventionally club-style tracks (“Vyzee” and “Bipp”) incorporate nearly atonal noises and hard to parse rhythms to form something that seems to endlessly approach the idea of ‘a pop song’ without fully crossing over. Sometimes it sounds like SOPHIE has never actually heard contemporary pop music, but has read countless books and blog posts about it—and it’s from this uncanny valley that his most weird and exciting work emerges.

The richest moments of Pupture seemed to ask what such a feeling looks like when it’s transformed into behavior. Throughout the PC Music catalog, there is a pronounced sense of aspiration: music that is trying to be pop music but not quite doing it the way we expect or want it to. You can see this in the artists’ artwork, which is airbrushed to uncomfortable abstraction in what can feel like a misinterpretation of what is normal or average. This was seen in Pupture through the occasional awkwardness of the performers, their expressionism in combination with their detachment, spoke to the difficulty of existing in physical space. Through “unnatural” gestures, verbal emphasis, broken syntax, jagged sound textures, the show seemed to capture a lack of bodily belonging to the world. Just as the 3D-modeled water slide on the cover of SOPHIE’s “Bipp” single is an expression of digital perfection absent of function or clear meaning, Pupture, at its best moments, found space to show how a body feels when it also has no coherent function—lacking either status or cultural use, perhaps finding a place within a kind of physical abstraction. In this way the show became, for about an hour, a virtual space separate from the rules or standards of anything outside the Museum.

The appearance of Hayden Dunham (the artist who, among many other things, performs as “QT”) toward the end of the evening amplified the uncanniness of Pupture—dressed in all black, performing a moving passage of washing a sleeping man’s hair before stuffing him under the stage curtain and drinking the remainder of the hair cleaning fluid. As she appeared back on stage, under red light, to perform perhaps a new QT composition, the sadness of what had proceeded was captured by a melodramatic, though concise, piece of pop lyricism: “You keep me sad.” Then the lights came up, and SOPHIE asked the audience if we had any questions.

Nervous laughter followed, until a staff member from the New Museum very quickly announced that there were actually “no time for questions.” The credited artists then left the room. Tellingly, the audience remained seated for several minutes, waiting for the next piece of the performance. The staff member eventually had to let us know that, yes, that was it, we could all go home. At least to this viewer, the substance of Pupture lived in this last, unplanned moment, before we had been asked to leave, when the lack of artists itself seemed to be, coherently, another piece of the show. 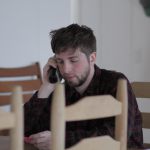