Five films that engage in varying abstractions of games, interactivity, and play

Whether using a playful mode of storytelling, criss-crossing timelines, or directly referring to immersive experiences, films old and new constantly refer to the world of games and interactivity. Immersive artist and filmmaker Dalena Tran recommends five films (+ two special mentions) that emerging game-makers can watch, feel inspired by, and hopefully, bring into their own practice. 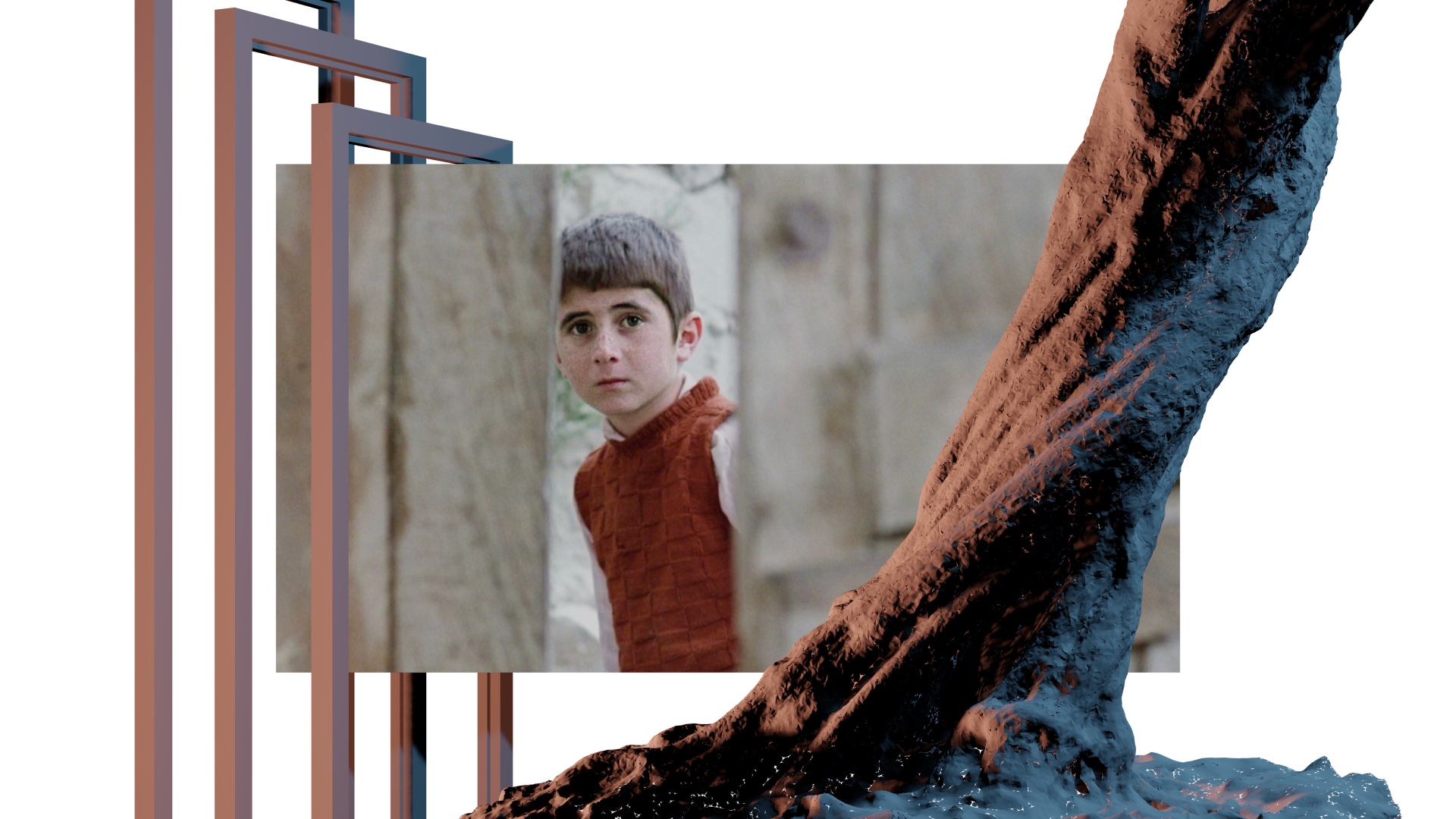 Where is the Friend’s House? (1987) dir. Abbas Kiarostami

One of Kiarostami’s earliest films features a schoolboy named Ahmad (Babek Ahmedpour) who, upon realizing he has taken his friend’s homework by mistake, embarks on a quest to find his friend’s home to return the notebook to its rightful owner. The conflict is simple but, for a child, the stakes are high. It is a careful portrait of a young boy’s growing sense of moral responsibility.  We follow Ahmad between the rules at school and at home, and the lack of them on the streets, as he learns how to assert the gravity of the situation among adults who besiege him with other matters. Through time and space, Kiarostami shows the grit of child-like sensibilities that is often depicted as innocent and naive.  As his unlikely adventure unfolds, Ahmad treks through dirt roads and backwoods, weaves through narrow alleys, knocks on doors, and solicits clues and detours from people he encounters along the way; providing rich vignettes of everyday life in rural Iranian society. 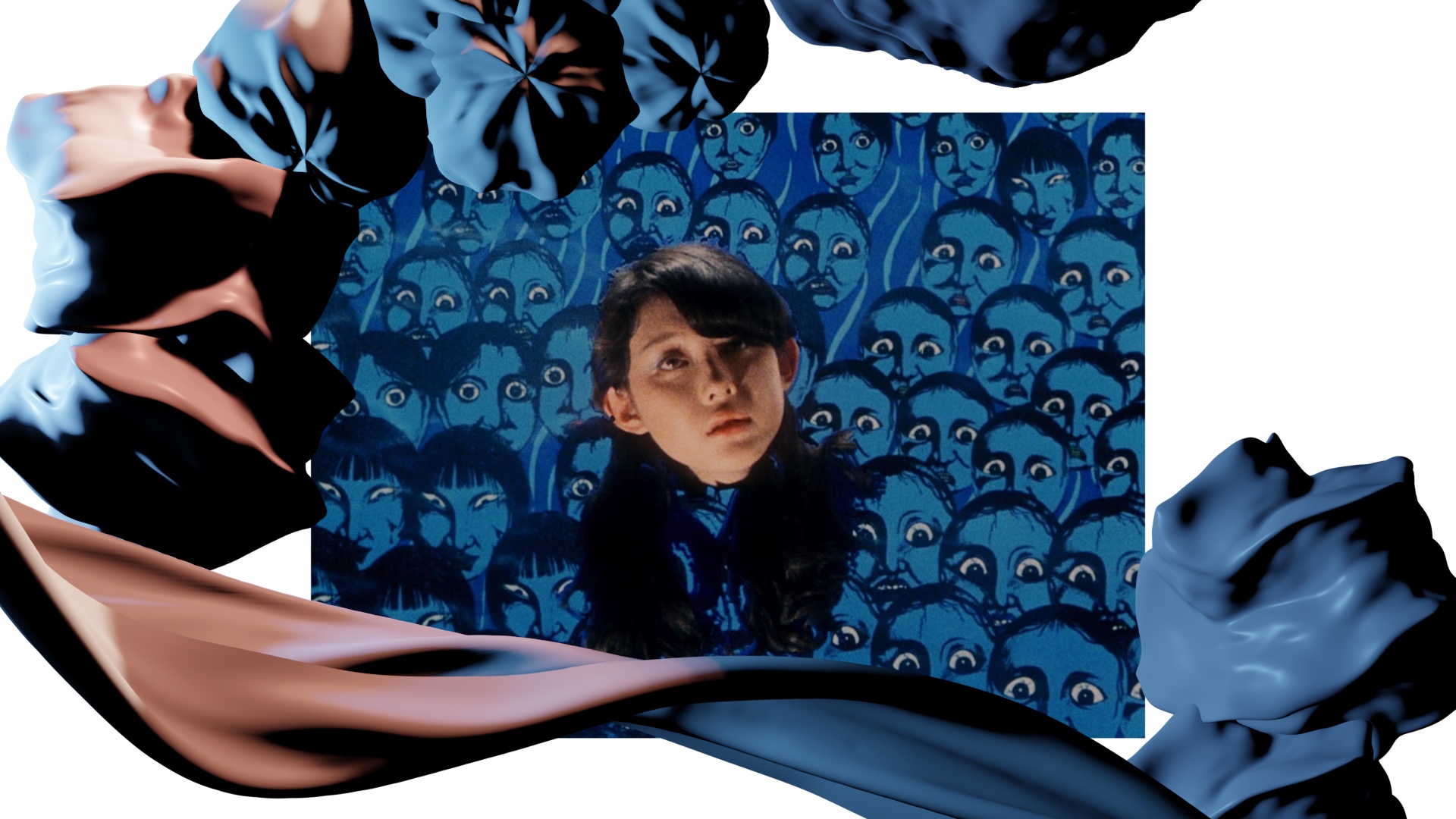 Obayashi’s part-horror, part-comedy, and part hallucination, House, aka Hausu, is as dazzling and fresh as it was more than forty years ago. What starts off as a coming-of-age story of young Japanese schoolgirls daydreaming about their summer plans, portrayed against serene, idyllic backdrops, spirals into the myriad, bewitched ways in which they are consumed by a voracious house in the countryside— haunted with anguish from WWII. Obayashi experiments with zany special effects, edits, and sound design to transform the medium into a phantasmagoric playground. The scantily chroma-keyed bodies, jump cuts, stop-motion, hand-drawn animations, distortions to the film image, and other audacious hybrid techniques would normally remind the viewer that they are witnessing a film. However, Obayashi creates a world in which spirits play the part of special effects, and each application only takes us deeper into the strange apparitions that film narrative is capable of. House is ripe for a pick-your-player midnight screening with friends. 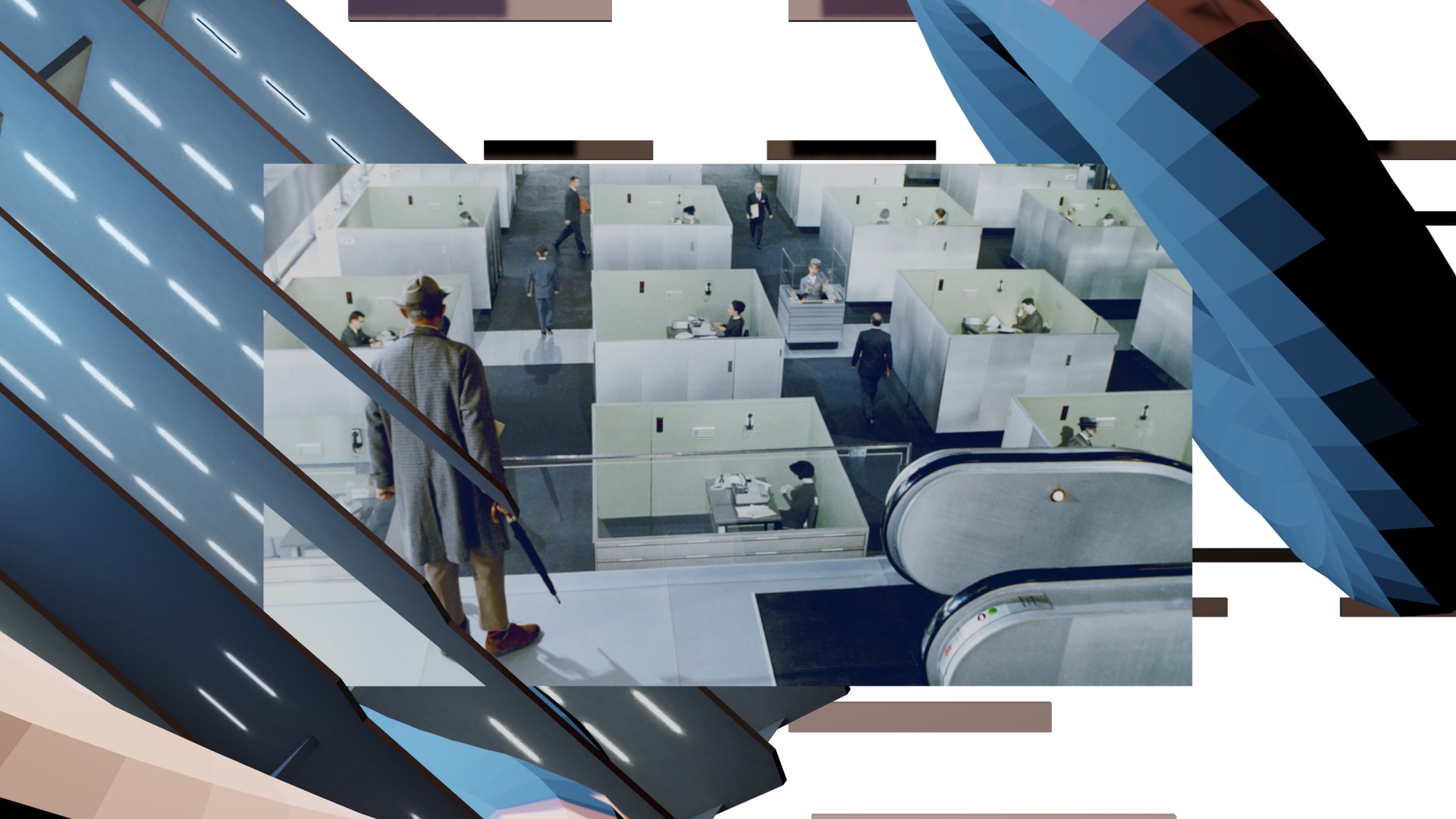 One of the most ambitious world-building projects in film history is Tati’s Playtime. In order to perform the essence of the modern city on 70mm film, Tati’s crew created ‘Tativille;’ an enormous, life-sized set of a city just outside of Paris that included high-rise office buildings, modular glass facades 15 meters high, imitations of an airport terminal, city roads, drug store, restaurant, and traffic circle. Each construction contributes to the bizarre, urban atmosphere which animates the characters in the story to life. Tati is a master at coordinating the body and camera to create perfectly timed moments of comedy. Tati stars in his own film as Mr. Hulot, an ordinary man, who goes to the city for an important meeting but is quickly swept into a labyrinth of exorbitant glass and steel. The film captures both the dazzle and homogeneity of the contemporary city that lures and seizes its inhabitants in its methodical spectacle. What looks like a hospital is actually an airport; what looks like a door is actually a window; what looks like a window is actually a screen. 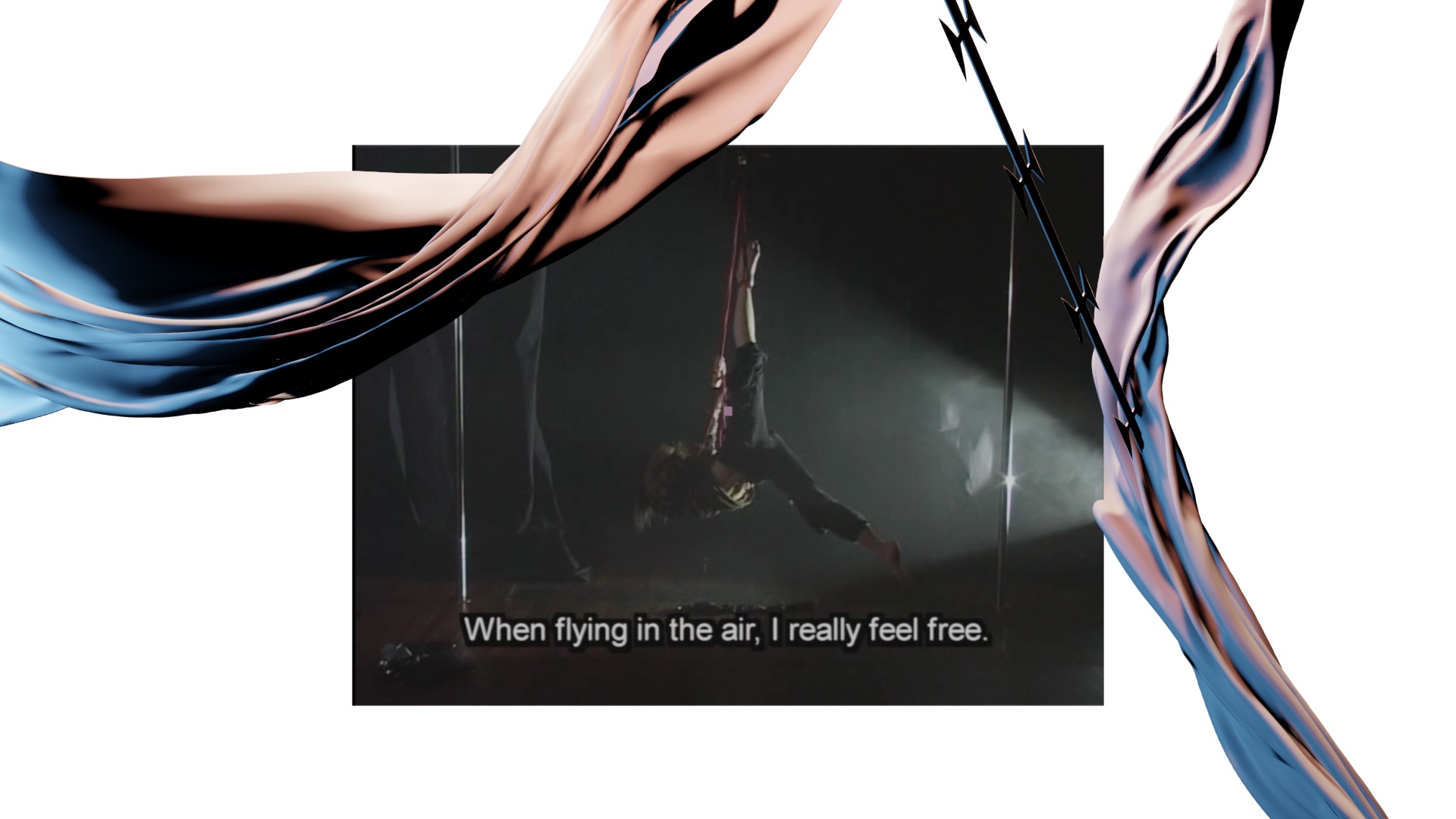 Steyerl’s fresh and nonchalant documentary takes us to Tokyo, Japan, where she is on a mission to find the Japanese rope bondage photographs she modeled in 1987. She doesn’t remember the photographer or the magazine the images were published in, and, during that time, there were over 100 publications every month featuring photographs of Nawa-Shibari, a Japanese art form where women are tied up with rope and typically suspended in mid-air. Of over millions of photos taken of women in bondage since 1987, the search is quite ambitious, taking Steyerl and her translator, Asagi Ageha, across the historical underside of a contentious network and art practice in Japan. Interviewing rope masters and bondage photographers for leads and combing through thousands of magazines from the sex archive, Steyerl additionally interweaves clips of bondage across politics, culture, and art that open up a field of inquiry between the networked agents and objects of desire and shame, captivity and freedom, and dominance and subjugation. 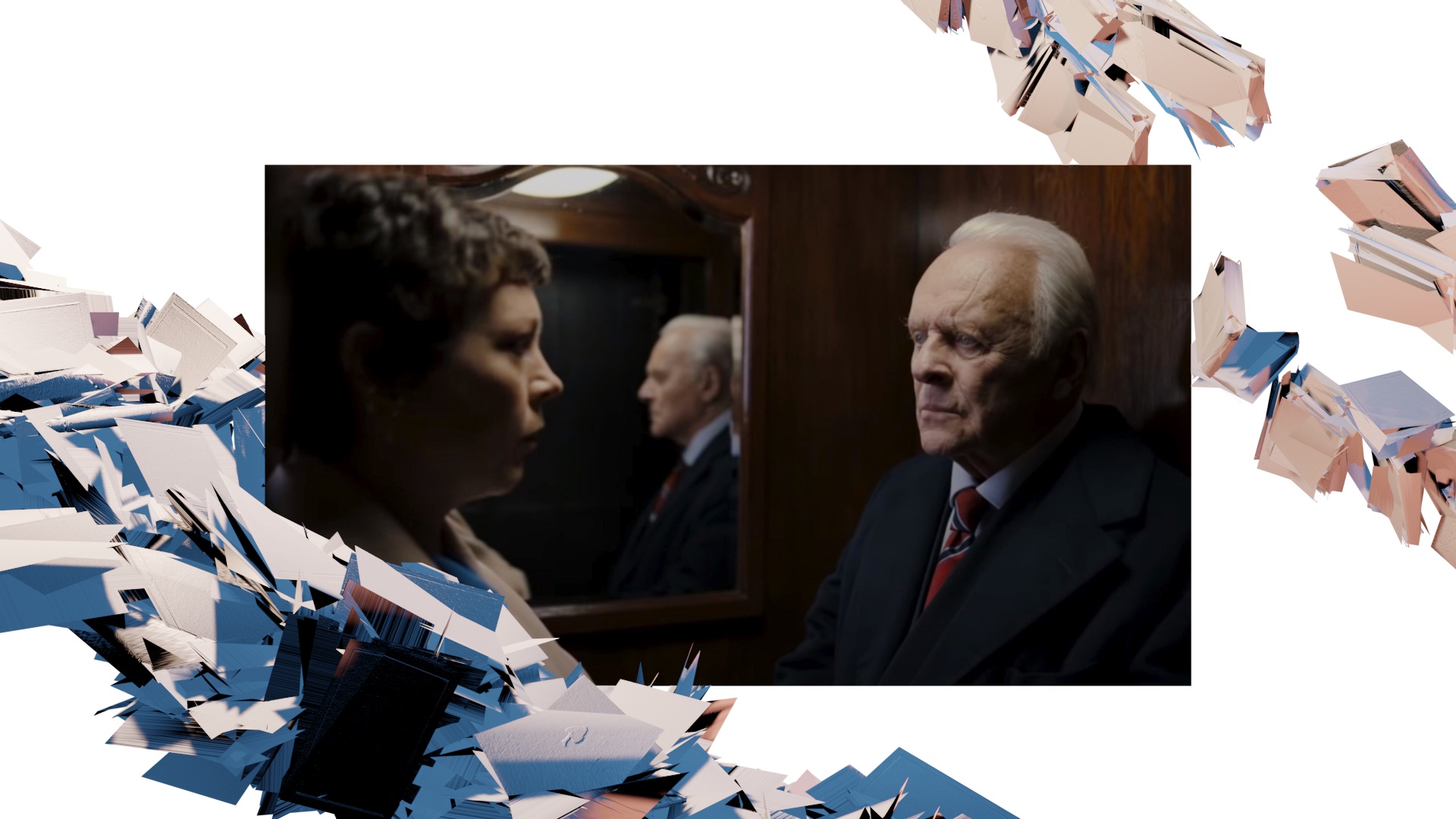 A brilliant debut film by Zeller that formally articulates an elderly man’s (Anthony Hopkins) experience with dementia. Adapted from a play, Zeller habituates the embodiment of place and performance on stage to the screen and uses temporal techniques afforded by film, like looping camera takes and dextrous editing to fragment and progressively muddle relationships and timelines of events; prompting the viewer to second-guess the reality they’re seeing on screen and, thus, deeply sympathizing with the father in the story.  It is immersive as it is disorienting— a confrontation of memory and media in dynamic and novel ways.

Five bizarre stories are loosely tied together to form this brisk and whimsical kaleidoscope. Most notable are the colorful and elaborate set designs and costumes.

An essential and didactic analysis of the construction of images by tracing the evolution of video game graphics and the labor and implications involved in generating increasingly convincing graphics through computation.