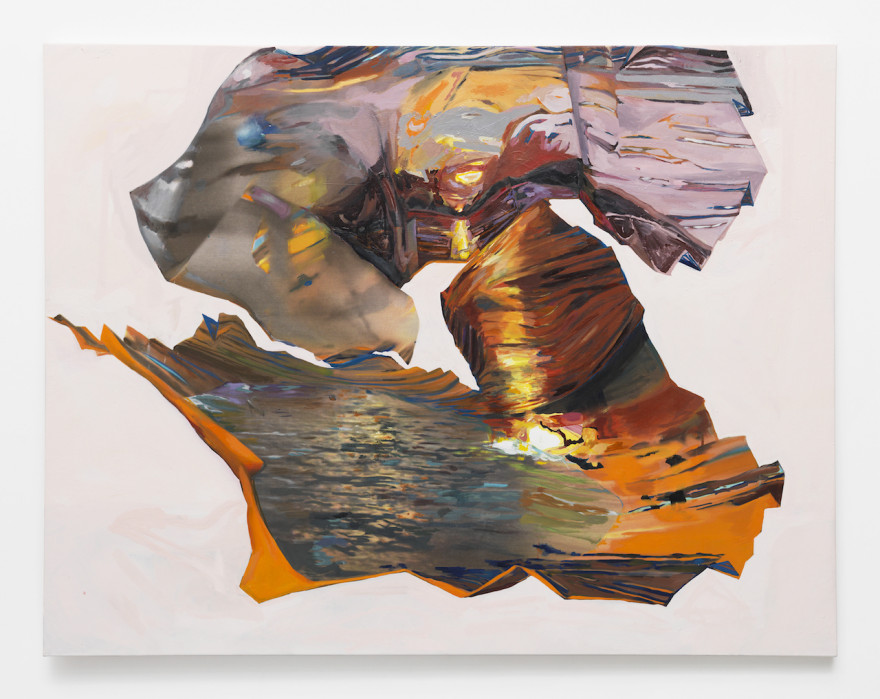 New York artist Rachel Rossin sees beauty in an ersatz sunset. “GTA V has some of the most beautiful sunsets I have ever seen and they give me a very similar experience to the sublime that I experience in ‘real life,'” she says. “This was very interesting as my show, Lossy, was about the translation of physical reality to virtual reality.”

Her exhibition, Lossy, was held in Zieher Smith & Horton, Manhattan from October 15th through November 14th 2015. Part of it pays tribute to those unreal sunsets in Grand Theft Auto V as an oil on canvas painting titled “After GTA V.” It depicts two sunsets attempting to wrap around each other. Rossin is credited as the sole author of this painting but she considers herself to have a co-conspirator in the form of physics engines.

The process behind creating these paintings acts as an explanation: Rossin creates “drafts” of each painting and then transfers them to virtual reality, where the 2D images are given cloth dynamics simulations and subjected to inverted gravity so that they crumple and distort, then Rossin simply picks stills from the results to turn them back into physical tableaus. In other words, the paintings are churned through a physics engine and then piped back out onto a canvas, meaning that we can only experience Rossin’s original paintings in a mediated form.

Lossy reflects the increasing method by which many of us experience real locations and objects, which might be through a TV, as a photograph in a magazine, or recreated in a digital space. Perhaps you’ve explored Chicago in Ubisoft’s Watch_Dogs but have never physically visited the city yourself. What Lossy represents is the image saturation that we experience as we jump from screen-to-screen in our modern lives. The title of the installation makes reference to lossy compression in JPG and MP3 formats, as data is encoded to a digital form and inevitably loses some of its original quality as an inferior facsimile.

“it’s about the entropy of these moments”

Accompanying “After GTA V” and the other paintings that made up Lossy were virtual reality headsets that dangled from the ceiling. Putting them on let the visitor enter the virtual reality installation “I Came and Went as a Ghost Hand,” which Rossin tells me is about floating by windows of three-dimensional captures of time.

“The photogrammetry captures are of personal moments of my life and the tableaus that I painted from,” Rossin says. “So it’s about the entropy of these moments (as you travel there is a script that lightly decimates meshes) and then the strange familiarity and translation of a 2D (painting) that you’re literally inside of.”

You move without control as a spectre through warped and decaying virtual architecture. The memories of Rossin are seen to fade, violated by the entropic effects of time and repeated technological degeneration.

Thematically, it recalls the notion of “kipple,” as devised by sci-fi author Philip K. Dick, who described it as useless objects, implying the epic waste left behind after aggressive capitalism. “It’s a universal principle operating throughout the universe,” Dick wrote about kipple, “the entire universe is moving toward a final state of total, absolute kippleization.” If “kipple” applied to the gradual waste of physical objects, perhaps Rossin’s coinage of “Lossy” can be understood as a similar term, one that references the unstoppable deterioration of all digital data.

You can find out more about Lossy on its dedicated webpage and about Rachel Rossin on her website.