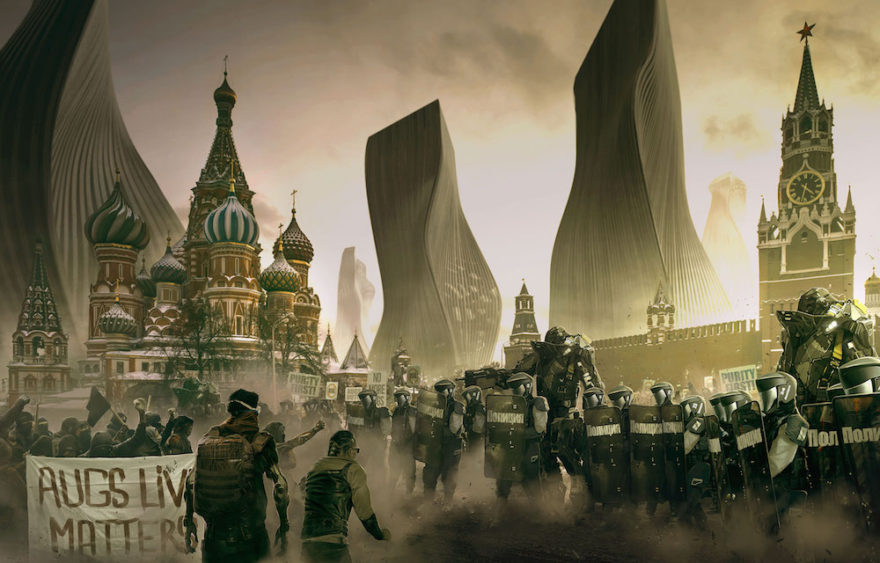 In anticipation of Deus Ex: Mankind Divided’s release later this August, Square Enix and Eidos Montreal have released a series of pictures depicting the current state of major cities around the globe during the events of the game, including London, Berlin, Barcelona, Rio de Janeiro, and Moscow. They are… certainly something.

As far as art goes, it is at least technically admirable: it hits the exact grimy spot between “this is too normal to obviously be a dystopia” and “I had to stop playing to go take a bath,” and the cities look big and bustling and appropriately futuristic. The skies are nice and smoggy—except for Brazil, because if you ask someone not from Brazil to draw you Brazil they’re gonna hand you an in-flight advertisement—and in every picture large compounds are bursting out of the ground like ugly, architecturally unsound flowers. It does create a distinct feel for the world, with that vibe, you know? The ‘I’m gonna get carpal tunnel from holding down the crouch button’ vibe. 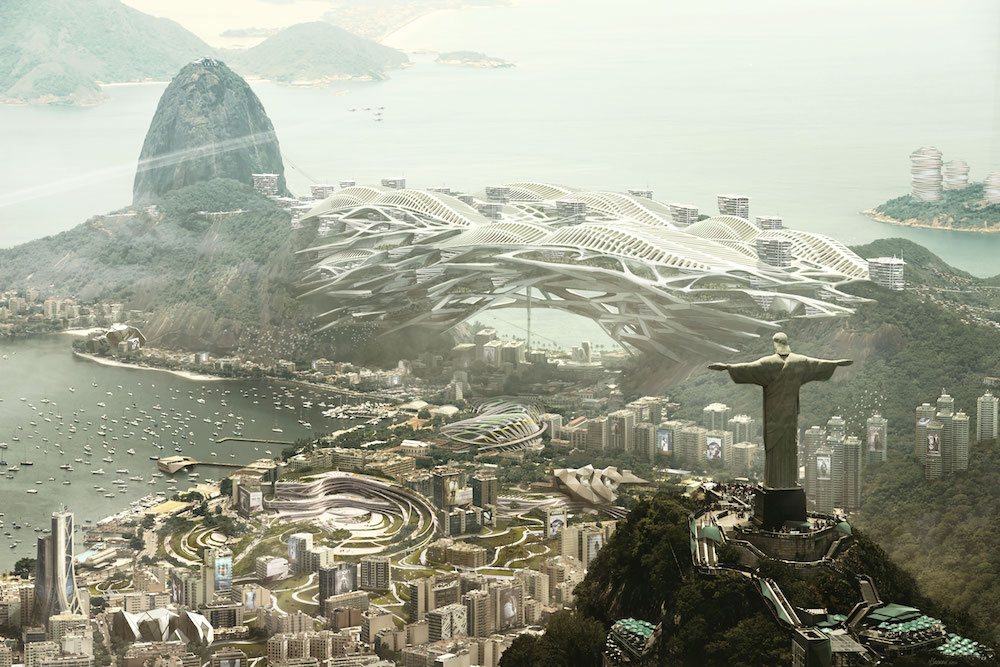 But look closer at the pictures, and in the midst of this ambiguously gray future/dystopia/hellscape, something more interesting emerges. A huge component of the Deus Ex games is the presence of “augmented” humans, who are outfitted with a whole deal of robotic gizmos and genetic alterations and look like Cyborg from Teen Titans. At the end of Deus Ex: Human Revolution (2011), augmented people were implanted with biochips, which were triggered with a Big Red Button signal that made them go bonkers. Tons of people were killed, public outcry was enormous, and perception of the augmented went from “kinda weird robo-neighbors” to “haha, hell no.” By the time of Mankind Divided, augmented people have been cordoned off into slums—which are clearly visible in most of the pictures—and are treated as second-class citizens by the “normal” populace.

I can believe that, at its heart, this is a genuine attempt to tackle the issue of discrimination, segregation, what have you, but from this distance it seems the execution is lacking both subtlety and consideration for the real issues it appropriates. The most egregious offenders are the “AUGS LIVES MATTER” signs found in the Paris, Sydney, and Moscow art, which obviously borrows wording and intent from the Black Lives Matter movement that gained traction in the United States after multiple shootings of unarmed black men by police. Which, you know, I understand the intent, but the difference should be self-evident. One is a videogame with a right to explore sensitive issues, but also an obligation to be respectful of the way those issues affect people in real life. The other is 156 black people killed by the US police in 2016 already.

It’s not that sci-fi and fantasy don’t have a history of using metaphor and fiction to explore societal problems, but in this instance especially, it rings hollow. If it’s an exercise in sympathy, try turning on the news. If it’s an attempt to convince people that discriminatory violence is bad, maybe talk to your mean uncle who calls the Civil War the “War of Northern Aggression” about the people who are actually being extrajudicially executed every day. There is a time and place for commentary on political issues; disaster porn in a background image is probably not it. Not only does it ignore those for whom this is an everyday concern, but it’s disrespectful to Trayvon Martin, Mike Brown, Sandra Bland, Philando Castile, and the hundreds of others who were killed without due process or legal justice because of a broken system.

This is all without confronting the dubious use of “apartheid” to refer to the division of augmented people from the rest of society, a term with heavy connotations in South African history, or the questionable choice to place a wall of checkpoints in front of the Brandenburg gate, because that doesn’t bring up any bad memories at all. There’s always a chance that Mankind Divided will pull this off, but unfortunately the pattern’s veering towards the downside; we’ll see if mechanical discrimination is treated with enough candor and grace to justify bringing up such raw memories.

See what Deus Ex has done to your city on its website.