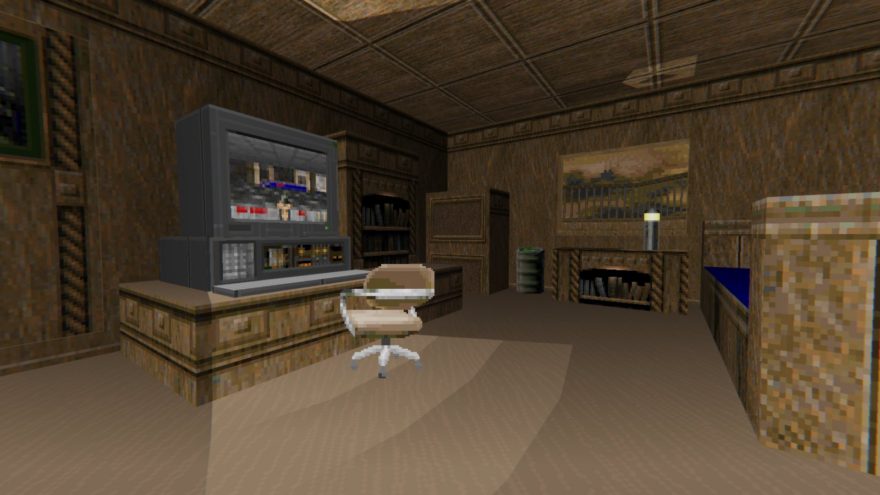 I’ve never met JP LeBreton but I know him because he knows the original Doom series. He wrote what is probably the most insightful design analysis of the game back in 2010; before he became a level designer for BioShock (2007) he learned the craft with Doom‘s level editor (and then demade his BioShock level “Arcadia” in Doom II); and more recently he had the opportunity to talk at length with one of the original Doom creators John Romero about his work on the game.

It does not surprise me when LeBreton tells me “Doom is this thread running through most of my life.” It’s exactly what I expect him to say. This is why his latest project, Autobiographical Architecture, makes a lot of sense. It’s to be a multi-part interactive story about LeBreton’s life, all of it made inside Doom II with its modding tools. It was born out of LeBreton’s realization that he “could talk about [his] life experiences from within the game itself and let the two resonate meaningfully.”

LeBreton’s life is to be reenacted through those very pixels

If you watch the trailer for the game below you’ll get a taste of what LeBreton is going for. You’ll see scenes typical to many people’s lives: graduation, riding a BMX, a homecoming dance, a psychotherapy wing, a fire in the middle of a dark blue woods. But all of it is made with the crude textures of the Doom II engine—gnarled trees, steel block walls, sci-fi doors that open vertically. Right at the beginning of the trailer, the camera zooms into a PC playing an even more low-res version of Doom. It’s an appropriate gesture, telling us that LeBreton’s life is to be reenacted through those very pixels, refashioning the classic icons of Mars colonies and Hell to a childhood obsessed with them in Texas.


He won’t say what storytelling techniques he’ll be using as he doesn’t want to spoil the experience. But the trailer suggests to me that LeBreton will do more than recreate real spaces in a virtual engine. The parts seen in the trailer that intrigue me the most are the more abstract corridors and arenas, some of which are taken directly from Doom (1993) and Wolfenstein 3D (1992), others seemingly original. There’s a blurring of real and virtual architecture, as if the paths sprinted through in the game are just as important as those walked in reality—this is a parallel that is, of course, made deliberate through the means of production, but it seems it could also be a bigger theme that will have many layers to it. And the sight of M. C. Escher’s classic 1953 print “Relativity” to the side of one of the desks only cements this idea; that there are multiple interrelated paths at play, different centers of gravity to the many strains of LeBreton’s life. Or it could simply be representative of his growing interest in architecture as he grew up. We’ll have to see.

The idea for Autobiographical Architecture came to LeBreton years ago but only now does he have the time, as well as enough bank between his Patreon and his savings, to actually commit. This opportunity also seems to have come at the right time. He’s at a point in his life at which his feelings about past experiences are becoming more complex and nuanced. He struggles to put them into words. “I’ve spent much of my career speaking the language of game levels, and it gives me ways of expressing ambiguity, interconnection, bittersweetness that feel true,” he said. This is why trying to communicate those feelings through a game works and makes sense for him.

There is another motivation. Having spent much of his career making things for other people has meant he has almost zero ownership over his previous work. He’s proud of it, of course, but he says that this work has “not enriched [him] in proportion to what they took out of [him], and other people can and will re-decide that they mean something else.” He adds that that’s the nature of the business, though, and he knew that going in.

Autobiographical Architecture, then, is something of a statement. “I exist as an individual voice now. This is me.” That’s how LeBreton describes it. When asked how he thinks his game will compare to other autobiographical games—most notably Anna Anthropy’s Dys4ia (2012) and Nina Freeman’s Cibele (2015)—he says he doesn’t know. A comparison, it would seem, is not the way to approach this. In fact, LeBreton’s answer is one that he applies not just to this one game but to any comparison between autobiographical games. “[T]he process of making this is more about digging deep into myself, singing words only I know,” he said. “It’s instinctual and everyone’s way will be different and that’s exactly why it’s valuable.”

Autobiographical Architecture will be released in three parts. Volume 1 is mostly about growing up in Texas, while the other two will deal with other points in LeBreton’s life, specifically “times of crisis and identity (re)formation.” Volume 1 should be available to download later this year—and yes, you will need Doom II to play it.

Look out for more info on Autobiographical Architecture on its website.