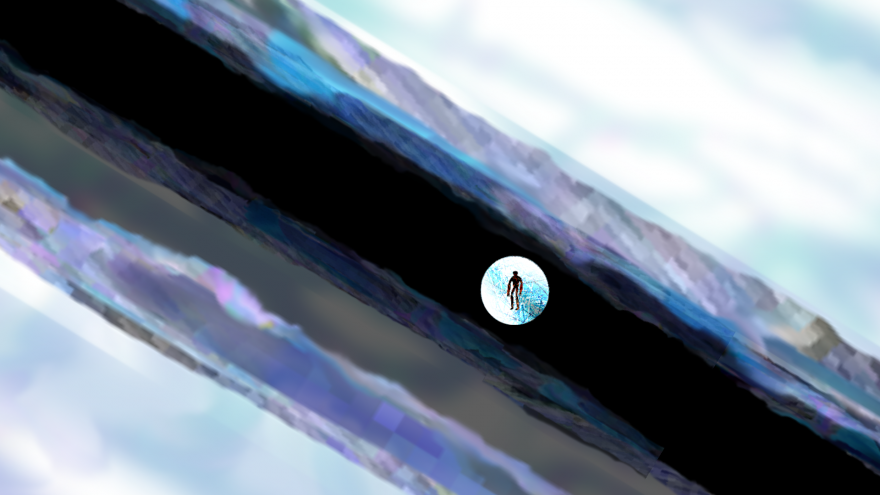 Barnaque is one of the most interesting freeware game studios to have emerged in the past few years. Comprised of the Montreal-based duo David Martin and Émeric Morin, Barnaque has made games that are often described as “batshit crazy” and “psychedelic,” mostly because the pair want to mess with players through game form, art, and mechanics. “What we’ve been trying to do since the beginning of Barnaque is to mess with people’s expectations by establishing patterns and breaking them,” the pair told me over email. “Infini is our strongest attempt at this.”

Infini is the pair’s next game and it will be their first commercial one at that. It’s about Hope—personified as a sickly-looking man—stuck in and trying to escape Infinity. In terms of form, it’s a puzzle platformer in which Hope constantly falls down the same screen due to the game’s use of wraparound, or screen wrap. That means when Hope falls to the bottom of the screen he appears again at the top, the same goes with the left and right sides of the screen.

“the burden of being endlessly hopeful”

You have to navigate between insta-death walls using the screen wrap to reach the exit in each single-screen level. Later on, you’re given the ability to control the camera zoom, steadily revealing more of the level—but there’s a danger of revealing too much and condemning Hope to death if you’re not careful. It’s much easier to understand the concept yourself rather than read an explanation so I’d advise downloading the early Infini prototype on itch.io.

If you’ve played Barnaque’s previous games then you may see Infini‘s structure as a little less experimental than the studio’s established tastes. This is true: Barnaque is looking to “present a game that looks traditional and arcady” at first. Part of this is Barnaque’s concessions to the game’s commercial status. They want to be able to survive making games if they can and they think the more traditional structure will help to reach more players. The other part of this is that they’re hoping to bend that rigid structure in a perhaps more jarring way than their previous games.

While Barnaque is being understandably coy about how this experimental part of the game may play out, they did give some details on how the story will unfold. Infini‘s story will be told across the levels themselves and within self-contained sequences. The former will be in the form of conversations while the latter are short animated interactive scenes such as the section with Memory in the cemetery in the early prototype. You’ll also collect poems inside the levels which will then by read by Poetry, the dog—there’s an example of that here.

“All our games so far take place in the same narrative multiverse inhabited by personified concepts,” Barnaque said. “Infini is set some time after Nulle Part and will feature characters from some of our freeware games. The larger goal of Barnaque is to reveal in a chaotic, puzzle-like way parts of this larger narrative, with different tones and varying degrees of seriousness.” What this means, then, if you haven’t played Barnaque’s previous games—especially 900, Carte, Tombe, Vaiselle Croche, Ouragan, and Nulle Part—you should probably go and do that.

I had to ask about the potential, obvious metaphor of Infini too. My question: is this a game about hopelessness?

“Partly, yes, but it also is about the apparent invincibility of Hope, and the burden of being endlessly hopeful,” Barnaque said. “Placing Hope in Infinity also serves to illustrate the smallness and fragility of a human concept inside an incredibly large and unknown universe.”

You can download the Infini prototype over on itch.io.