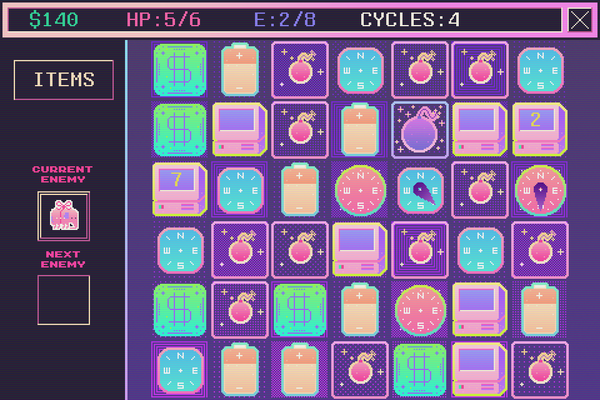 The NYU Game Center’s Incubator game, Beglitched, essentially turns the seedy and terrifying underworld of hacking into the single most kawaii tile adventure you’ll ever embark upon. For example: you know those annoying emails you get in your inbox about making your penis 6 inches longer? Well, Beglitched transforms those pests into anthropomorphized enemy “spam” types—not the boring, unwanted email kind of spam, but the canned ham kind, only with arms and legs and an adorable face.

Beglitched essentially looks like an LSD fever dream overloaded with cuteness and techie double entendres. Creators Jenny Jiao Hsia and Alec Thompson describe it as a “game about insecurity, in our computers and ourselves. In a pastel world of networks where nobody truly knows what they’re doing, hacking is a magical art and the notorious  is the most premium archmagi of the net.” As the Incubator Devblog from their first two weeks of development indicates, the part about not knowing what to do seems pretty literal. There’s some concern over the learning curve in the game and so the creators vow to improve it.

But once the kinks are worked out of Beglitched, it promises to bring a playful sensibility to procedural strategy gameplay. The teaser trailer shows one user/hacker signing in as “FARTMACHINE1234” before the system loads up, during which it has to perform unusual routines such as “FLUSHING TOILET THREADS.” By far Beglitched‘s most compelling element derives from its colorful band of characters who I can’t wait to buy in plushy form—be them enemies or the protagonist. Playing as the fabled Glitch Witch, only “your wits and cunning to unravel the mechanisms of an alien computer and survive amongst a veritable web of clowns, leftclickers, and filedraggers.”

While Beglitched sets its own tone and is built on top its own foundation, both the name and layout recalls Bejeweled in its saccharine visual feedback. Only, instead of boring virtual jewels, Beglitched plays with some of the cutest pieces of canned ham to ever grace the internet.

You can keep up to date on Beglitched through its official website.