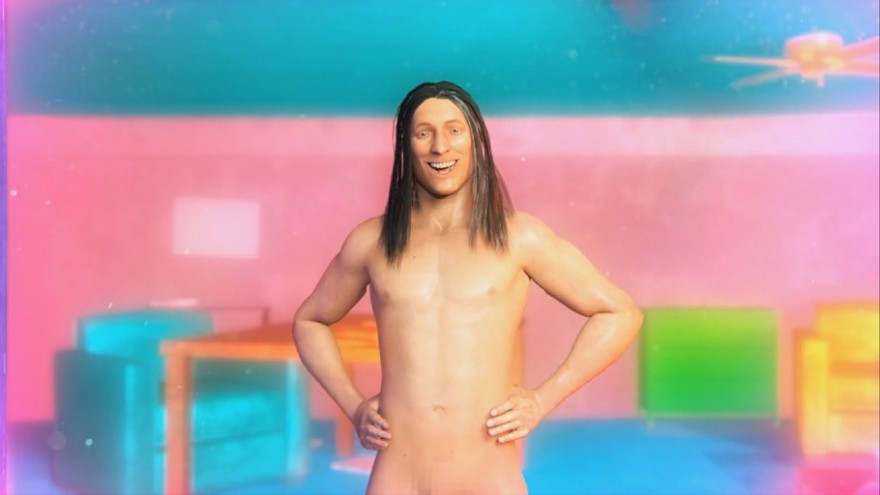 Recently, a first person videogame surfaced seemingly on a cloud of unicorn dust and heart-shaped kisses, only to change the way I saw the genre forever.

Though the gameplay of First Person Lover feels familiar and even somewhat standard—enjoyable, at times oddly terrifying—it was the premise that transformed my preconceived notions about what an FPS can be about.

Liberate haters of their clothing and giving them love in the form of sweet new threads.

First Person Lover is the name of a Swedish fashion game, commissioned to promote Björn Borg’s spring fashion line. It’s about liberating haters of their clothing and giving them love in the form of sweet new threads (do people still say that?) from Björn Borg.

Wacky FPSs aren’t a new thing. We’ve written about them, and they will keep coming for as long as the popular genre needs reminding of its often—let’s admit—ridiculous conventions.

If you didn’t catch the launch trailer for First Person Lover a month ago, this basically sums up the premise better than words ever could:

Let’s call First Person Lover like a rainbow colored intervention for the FPS genre. At least that’s what it felt like at times while playing it. I say this as a fan of pretty much all things shoot-y and first-person-y, but I’m going to be real with you, FPSes. The genre has been looking like it could use a bit of a boost of innovation and bravery. It’s been over seven years since Portal came out. And not much has come close to shaking up the idea of what a first-person-shooter can be since then.

Just a month into Swedish studio ISBIT Games’ existence, they were contacted to make the fashion game using the first person mechanic. “When Björn Borg contacted us, asking if we could develop a game for their new clothing collection, we didn’t know what to expect,” says ISBIT producer Markus Koos. “We already had two small projects in development, but paused both after being offered the opportunity to develop this crazy Björn Borg game. It was a chance we just couldn’t pass up.”

Their only instruction was to use Björn Borg clothing within a first person shooter. And this was the game they pitched.

“When we presented our ideas,” Markus says, “we went in with the mindset of all or nothing. To our surprise, Björn Borg loved our ideas. The game’s foundation really matched the company’s message of love and acceptance.”

It took the team only six months to finish the game, a genuinely impressive feat for a free game with this level of complexity. Though the ISBIT studio is new, the team consists of many veterans of the industry and FPS genre, with experience making games like Battlefield and Wolfenstein. “Over the past couple of years, the games we’ve have worked on have mainly been first-person-shooters,” Markus explains, “And we always felt like it was possible to do something different with the genre.”

It brings a bit of much-needed silliness to a genre that can take itself too seriously.

Different it most certainly is. And it doesn’t necessarily read like a critique or even a jab at the FPS. It’s not an improvement to the format, nor does it pretend to be. First Person Lover simply brings a bit of much-needed silliness to a genre that can take itself too seriously in a totally off-putting way sometimes. Like, say, Plants vs. Zombies: Garden Warfare (which was honestly one of the more exciting FPSes of last year.)

But I’ll admit, the ridiculousness of First Person Lover sometimes even made me get weirdly reflective. In between my bemused chuckles, I found myself imagining how truly horrible this mechanic should feel if it was about killing human beings. You know, rather than liberating their pants off of with a teddy bear.

I liked how comfortable and less a murderer I felt while still enjoying the FPS mechanics. In one surprisingly poignant moment, a crowd of angry “haters” stands outside a mall shouting and holding up rainbow colored protest signs that read “GOD HATES FIGS.” It would’ve felt gauche, except that when you try to blast love in their faces with your smooch-gun, the computer-guide woman sadly instructs you to “let it go. Some people just can’t be saved.” It felt weird and kind of telling, to be told not to engage in a videogame. In an unwinable conflicts, First Person Lover says, you’re better off moving on; live and let live applying to even to the scummiest of assholes.

When I asked Markus Koos if he thought the videogame industry could use more first-person-lovers rather than shooters, he said that, “Just like with any artform, video games need diversity and different ways to communicate feelings, stories and experiences. But in our opinion, love is something that the video game industry could definitely explore further.

You can help extend the love to all the unhappy haters out there by playing on your browser or downloading the game for PC and Mac.