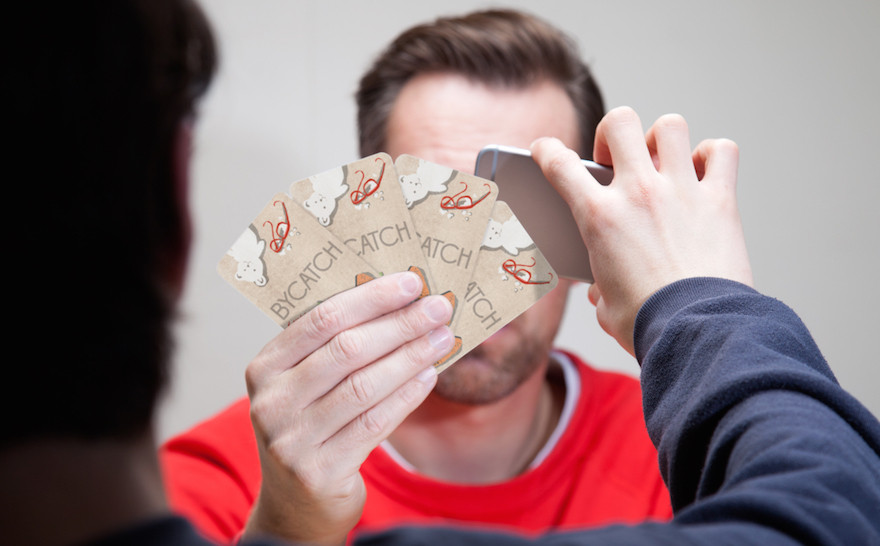 “it was my job to put a cross on each home with dead for clearing ? it was my job to dig graves into the soccer field ? I wrote red tracksuit ? I wrote Shahida headless, found beside Saad Mosque”
from “Drone” by Solmaz Sharif

By my third game of Bycatch, I was no longer bothered if the target was a child. It didn’t matter who the target was at all. They were a number and a few identifying characteristics: red bag, orange dress, man or woman, young or old. I was surprised by how quickly I settled into the rhythms of the game and its dictionary. This is the reason such language is so meticulously crafted by state departments and militaries to remove the humanity from a war zone. “Bycatch,” collateral damage, the fish in the net you didn’t mean to swoop up that is too worthless to worry about.

Those first couple games, though, it was unsettling. Bycatch is a Rummy-like card game in which each player is a country looking to place numerically ordered runs of citizens into shelters, taking them out of play and earning that player points. Nine numbered cards make up the citizens, each with flat but distinct character art. Two of these citizens are children; one of them wears a yarmulke. “Intelligence” cards randomly determine the current target; if you shelter the target, your points for that shelter are doubled. But you can also send out the drones.

Along the lines of Go Fish, where you are sniffing around the other players’ hands and calling out what you want and think they might have, Bycatch gives you the option to use a camera phone to shakily spy on your neighboring countries to identify targets worth a strike attempt. Remote-manned military vehicles have dominated our collective consciousness lately, and with good reason: We are told in many ways that they are all-knowing, all-powerful, and they would never be used against us. Here your camera-in-hand is the drone, and when taking surveillance over another player, you hold your phone over their hand such that you can’t see the screen or the faces of their cards. Thus you don’t know what you’ve got until you have already taken the picture, and your resulting intelligence is often pointed up your own nose or just a blur, though even a little info is better than nothing.

During your turn you can only take a single action: survey an opposing player’s hand with your drone-phone, build a shelter for points, order a strike if you discard two of the same citizens, or do nothing. You can’t drop bombs willy-nilly, and information is always outdated. Whenever a drone strike is ordered, three citizens are removed; if one of them is the target then the attacking player gets 100 points per matching target, minus 10 for each citizen that was not the target, aka the “bycatch” or collateral damage.

Even a successful strike sweeps up the innocent

As we played, I learned a few things about myself: Taking blind photos of your opponent’s hand is difficult at first, resulting in some hilarious and creepy selfies; no intelligence is infallible and the ability to bluff is key; and, though I was quite uncomfortable with the idea of administrating death from above during the first game or two, I would eventually to order drone strikes with no information and no concern who the current target was, just to mess up an opponent’s chance to build a high-scoring shelter.

Bycatch does have an explicit goal of getting people to talk about this sort of military activity, done on our behalf and affecting thousands of innocent people around the world. And it works, though it doesn’t dominate the experience. When my opponent racks up ten collateral damage kills in a sort of scorched earth campaign against me, eventually he gets his target, but at what cost? Even a successful strike sweeps up the innocent, you will pretty much always catch non-targeted citizens in an attack, so a strike is often imprecise and never clean.

But it’s easy to bury those impulses relatively quickly. In the moment it’s simply a game, with rules and a lexicon that strips out empathy from drone strike victims while simultaneously every card is a picture of a person living an ordinary life and collateral damage is nothing short of murder executed at your order. I mean, ok: we are holding cards, not nuclear launch codes, but the artwork of Bycatch is a consistent reminder of the human costs involved even if this is all just a metaphor. It’s all disconcerting at first, but by my sixth go-round I was cheering successful strikes and moving on accordingly. Still, even a number of games later, uncertainty creeps up on me. By then it’s too late.