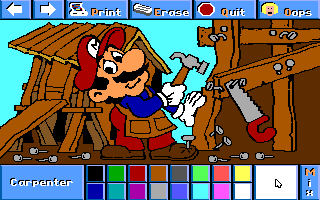 Super Mario, as long as we’ve known him, has been a plumber. Strangely we have rarely seen him engage in any plumbing. Super Mario is simply surrounded by pipes, but we do not see him inquiring about water leaks, fecal blockage, or invoices. Super Mario is more of a career adventurer, a socialite, a close friend to the royals, and the matter of his income would be more confusing if it weren’t for all the coins he picks up. The fact that every 100 coins automatically turns into an extended life suggests Philip K. Dickian elements may be at play within the mushroom kingdom, but dystopian factors don’t bar Super Mario, and his friends, from dreaming.

Super Mario Bros. & Friends: When I Grow Up (1991) was an edutainment coloring book for DOS made by Brian A. Rice, Inc., who also made virtual coloring books for Teenage Mutant Ninja Turtles, Inspector Gadget, and All Dogs Go To Heaven, as well as games based on Willow, Young Indiana Jones, and Donald Trump’s casinos. In When I Grow Up, Mario, Luigi, Princess Peach, Bowser, Toad, and even Link all consider different career paths. They imagine lives that could have been. They imagine what they could be doing if they weren’t kidnapping, being kidnapped, or intervening with kidnaps. They imagine of a more pedestrian life. Here are portraits from those lives.

They say divorce court is the hardest. That statement crouched in the back of Bowser’s mind for years, nestled with the wincing thought which repeated “that day will come.” He knew that day would come. He knew it was coming for a long, long time.

Bowser had been cynical much longer than he had been panicked. He came to accept that the case was stacked against him, he just wanted the agony to be over. He requested over and over that his trial be taken to a different county. The bad blood between him and the judge was toxic, thick, and old. The Mushroom Kingdom had very few eligible legal workers. It would be generations until society allowed Yoshi and Boos to approach the bar.

Link had waited for a plate of spaghetti for forty minutes.

Bowser sat in the hot seat, a pedestrian pleather chair that stuck to his own coarse skin. He was surrounded by people who have seen him at his angriest, his most ruthless, his most violent. It wasn’t panic or cynicism anymore, his body was flushed with pure, stone regret. Eventually he was fed up. He thought, if they think they know me, if they think I’m a monster, I’ll be a monster. I’ll put on a show. His tone flared up, gurning his face. He cut into the upholstery with his nails. His eyes turned white and red. He let a wisp of smoke seep through his teeth, residue like a cigarette trail, churned from his hot molten stomach. He looked for a moment at his wife. His ex-wife. Just for a moment. He thought it was like Persephone, just that if he glanced back at her he’d lose everything. She wasn’t crying. She wasn’t distraught. She looked unsurprised.

Bowser requested a recess to use the washroom. He sat in the stall, slumped against the side, weeping his snout into his claws, “They’re going to take my boy away.”

Link had waited for a plate of spaghetti for forty minutes. It wasn’t pomodoro. It wasn’t bucatini. It wasn’t Spanish-style tagliatelle. It was spaghetti and meatballs, the same kind his own father could make in a rushed evening, in family-sized portions. Princess Peach asked for the third time if he wanted anything to drink.

“I’m fine,” said Link. He just wanted to grab a quick meal before going to a friend’s birthday, where there would be drinks, music, maybe even women. He decided to try a new place in the neighborhood, “Mario’s.” It looked humble, hand-made. He liked that. Link liked the idea of supporting local business. His buttock was beginning to feel damp from the sweat. It was a hot room, and the gas stove shot out plumes of fire that reflected off the walls.

“This is looking good!” yelled Mario, presumably, from the kitchen. Link hoped it was good. Link hoped he’d arrive to the party with a story along the lines of, “I tried this new place in the neighborhood, the service was terrible but the food was amazing!”

Link had a second thought. No, the service wasn’t terrible. Peach, she introduced herself, shook his hand, brought him napkins before food, she was very nice, personable. He thought there must be a better way to describe the problem. “Almost done!” yelled Mario, presumably, from the kitchen.

It will always be this way, thought Mario. Mario bought new shirts and pants, nice new shoes. Ties. Mario bought ties. Mario couldn’t remember the last time he bought a tie. He anticipated an office job. The grass is always greener, he told his friends, he would laugh. But it’s always going to be this way.

Mario did two hours of data entry, fielding calls, drinking coffee. Normal. How wonderfully normal! Then it began. They came back. The same stubby little nightmares who followed him everywhere. Turtles he could shake. They’re turtles. No ambiguity. What are these? Mushrooms? Spades? Nipples? Mario would see them everywhere. They were enemies that ruined other things. But he wasn’t mistaking some normal everyday objects for them. They were real. They followed him.

Luigi’s hair was only a third done.

They poured out from behind his desk. One cracked through the glass of the monitor, like a creature birthed from a shiny black egg. They were parading all over the desk of his new life. Mario stood up and rushed out of the office. “I’m fine, I’m sorry” he told co-workers as he passed. He bet they didn’t even see them, out of view behind their cubicle walls or under their desks, like how mice sneak around. They wouldn’t even know they were there.

Mario made his way up to the roof and smoked half a cigarette. It was windy and cold. He outran them for now. It’s not in his nature, but he wondered if he jumped- “Would I end up landing on one of them?”

No one in the Mushroom Kingdom knew there were different sports.

Mario hears a lot of things. People walk into his barbershop every day, and they talk to him. They tell him about their trips, their kids, their trouble in paradise. Sometimes they are like puzzles, problems from one customer seem to fit with the woes from another. How often, he wondered, had the bane of one man’s life sat in the same chair? He felt like he knew more than anyone.

Peach opened the door but she didn’t walk in. She told Mario she had a package for him. Mario reached over and grabbed the firm envelope. It was reinforced by cardboard sheets to protect what was inside.

Mario unfolded the top of the envelope. It wasn’t fully sealed, it cracked open easier than velcro. He fished out the photos with his thumb, catching just the edge. He stopped. He retreated back to his office. Luigi’s hair was only a third done. He called for Mario. Knocked on his door. Mario never answered. Luigi never saw him leave.

Luigi decided he’d wear a hat for a while.

Luigi listened to “Gangster’s Paradise” five times en route to his first day of work. He never saw “Dangerous Minds,” but he could visualize Michelle Pfeiffer in the video as he made his way to a kingdom he had never stepped foot in before. Luigi thought he’d make the perfect teacher, that he could teach these kids anything.

“Back to our roots!” shouted Mario as he fitted a wrench.

“Back to our roots!” shouted Luigi as he set the tools down by the water heater.

“Back to our roots!” shouted Mario as he twisted a pipe off from the network.

“Back to our roots!” shouted Luigi just before they were interrupted.

From somewhere up the drain was a scream. A genuine, horrible scream. Someone who needed help, immediately, in one of the building’s apartments. They listened for a few moments, stunned, silent. It would be impossible to tell if the rattles and drips that resonated through the pipes were of their nature or signs of life on the other end. These pipes were not big enough to fit through.