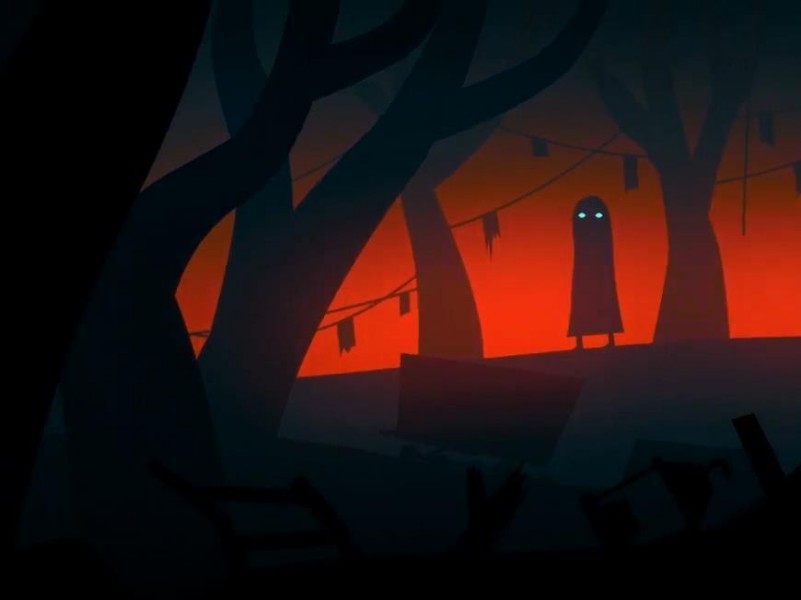 Once you grow up, you’re just going to be saying goodbye for the rest of your life. Things end. It’s inevitable.

The first time I returned home to Dallas/Fort Worth after a year of being in Tennessee for college, the regular neighborhood haunts were suddenly foreign places, inhabited by strangers. The local coffee shop was familiar yet inexplicably different. Friends felt like acquaintances. At the end of the summer, I went back to college, only to return a year later to even more fading memories and friends.

I’m not alone in that experience; we’ve all had that moment where the comforting became alien.  Scott Benson’s Night in the Woods channels that ennui into a Richard Scarry-all-grown-up-and-slightly-disillusioned form.

“Watching things you know and love change is difficult and beautiful in its own way.”

The nostalgic platformer, which is due out next year, stars a bass-playing, punk rock cat named Mae, as well as an assortment of ne’er-do-well friends of varying species, such as dogs, bears and alligators. From a former best friend who moved back home to help out the family business after the death of a parent, to the gay couple who are spoken about in hushed tones around town, Benson drew upon the ragtag group of punks from Return of the Living Dead as inspiration. That crew of kids “just being total idiots” reminded him of “all these crazy characters that I knew and hung out with, and that brought me back to the time period watching this group of really specific, really strong personalities grow up and change, and that weird, bittersweet feeling you get from it. That isn’t really nostalgia, it’s just watching things you know and love change, and it’s difficult and beautiful in its own way.”

The game’s punk aesthetics are wrapped up in what Benson calls a “cheerful aggression.” It’s there in the game’s initial launch trailer: a bracing sense of wonder, fear, friendship and longing that tugs at you, reminding you of aimless afternoons in the lot behind the local supermarket, or late-night traipses through the woods, back when being up past bedtime actually felt subversive.

Post-teen malaise, the loss of home, and watching friends turn into people you don’t know: this is not typical fare for the videogame world, to be sure. Zach Braff has built his entire career (and his own successful Kickstarter) off these themes, and this is the kind of stuff Thought Catalog writers whip themselves into a frenzy over. And let’s not even mention that the music industry has been flogging that horse for years. No matter what the medium, we crave stories that connect to our own experiences, even if they’re from some of the most difficult moments in our lives.

Games by their nature are about escapism, however. “A lot of good stories aren’t power fantasies,” said Scott (while admittedly leveling up on Risk of Rain during our Skype conversation). “It’s hard to tell that story if your main verb is blowing shit up, unless you have a really specific coming of age story,” he said, laughing. In contrast, when I pushed him on what he thought Night in the Wood’s “verb” was, he countered that their game focuses on more observational, internal actions: “explore, converse, see and touch.”

To tell such a personal story, Alec and Scott wanted the story to come first, building out game mechanics to support the narrative where needed. ”I’ve really wanted to work on something that’s more narrative-focused for a long time, but have been really scared because a lot of the traditional culture in the indie games scene that I’m familiar with is a lot of gameplay-first,” said Alec. “That’s a totally legit way to make games, but we’re kind of flipping that around, where we have a story idea, and we’re going to come up with mechanics that support that story idea.”

Focusing on that narrative-led game design, Alec and Scott fleshed out Mae’s hometown of Possum Springs with a vibrant community full of colorful residents, local hangouts, and even going so far as to create a custom engine for the town’s squirrel population. “Paws Mode,” originally just a prototype, became a happy accident as a way to bring a first-person view into the 2D world.

“They finish their song and keep animating as if they’re singing. I just quit at that point.”

It’s these little details that can make or break an experience. Alec described a moment with Bioshock Infinite as he watched a barbershop quartet astride an airship serenade a couple. “And then they finish their song and keep animating as if they’re singing,” he said, “and their airship flies away and clips straight through a building. I just quit at that point.”

Suspension of disbelief is a frail thing, and it only takes an instant to ruin that, but recent successes of meditative, internal stories like Gone Home and Kentucky Route Zero have pushed the envelope on where we’re used to seeing interactive experiences take us. “If this was a couple years ago, I wouldn’t feel very empowered doing this game,” said Alec. “Now that [those games] have come out and been successful, it’s kind of been like, ‘Oh, there is an audience for stuff like that.’”

Curiously, if Night in the Woods as a game exists in the wake of Gone Home, Scott sees their stories as being almost sequential, too. “Gone Home told this story of getting into punk rock, making friends, falling in love for the first time and coming to terms with sexuality for the first time,” he said of the Fullbright Company’s conversation-changer. “Night in the Woods is [like] that, but years later where you’re having to say goodbye to a lot of these firsts. So I guess if Gone Home is a lot of moments of ‘firsts’, this game is about a lot of your ‘first lasts.’”