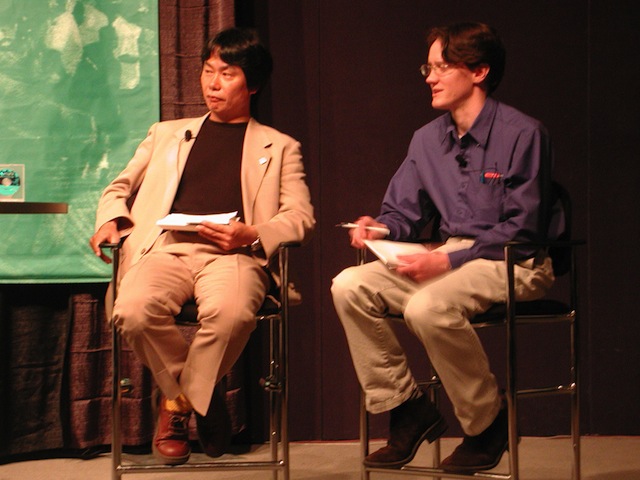 Videogames haven’t always been a global industry. Without the right communication, the surprising avalanche of quarters plunked into a California tavern’s PONG machine in 1972 might have gone unnoticed. But enthusiasm (and money) is a universal language; six years later, Japan allegedly ran out of 100-yen pieces in the wake of Taito’s arcade hit Space Invaders. In 1983, a playing-card manufacturer released their first home console, the Famicom. With the release of the western version, the Nintendo Entertainment System (NES), two years later in North America, games would never again be separated by an ocean.

That same company released their sixth home system, the Wii U, on Sunday, November 18th. Hours before the midnight launch at the Nintendo World Store in Manhattan, we spoke with Bill Trinen, Director of Product Marketing at Nintendo of America. He also serves as official translator for Shigeru Miyamoto, one of the most famous and influential figures in the business.

We spoke at 11:15pm, just forty-five minutes before Nintendo sold the first Wii U. Trinen had more pressing concerns—he’s a big fan of the University of Oregon’s football team. After our interview, thirty minutes before his company’s newest product launches onto the global stage, he’ll ask the store’s security guard where the nearest sports bar is so he can watch the final minutes of the game. [The Ducks lost to Pac-10 rival and Rose Bowl representative Stanford 17-14 in overtime.]

Kill Screen: How’d your Ducks do?

Bill Trinen: It’s on right now. [He pulls out a smartphone and checks the score. The app is already open.] They’re tied, 14-14. I haven’t watched a single minute of this game. It’s killing me. They’re about to, they’re trying to drive down and score… there’s like 57 seconds left in the game.  It’s ridiculous.

It seems like there’s a few memorable faces or personalities in the Nintendo ecosystem: [Satoru] Iwata*, Miyamoto, Reggie Fils-Aime, and yourself. If we’re thinking of the company as a football team, what positions would they play, and why?

Wow, that is a fabulous question. Mr. Iwata is probably the head coach, right? Miyamoto would have to be the quarterback, ‘cause he’s pretty heavily involved in orchestrating our software—what games are they working on, what are they going to move forward with—

Yeah, he’s kind of like a quarterback who is also calling the plays. Like Andrew Luck did in a few of those games last year for Stanford. I guess Reggie might be the offensive coordinator, from the marketing standpoint. He and Scott Moffitt together are really driving all of that. I think I’m probably the waterboy on the sidelines. You know, without water the team’s not going to make it, but… (laughs)

Clearly you do play a pivotal role in the public eye. [As a translator] you seem to be the public face in between Japanese culture and American culture. One thing that’s interesting about the Wii U is some of the naming conventions, specifically the… I’m not even sure how to pronounce it.. the Wadda wadda—

*Wara Wara Plaza is the name given to the Wii U start-up screen, where Mii characters gather around game-icons as if in a public square. Players can draw or type messages about the games, which show up as dialogue bubbles.

Could you talk a little bit about that naming decision?

One of the things we saw coming out of E3 was when we ran the original video on Miiverse, and when Mr. Iwata first introduced it, he described it using the term they referred to it as in development, which is the ‘Mii Wara Wara.’ With ‘wara wara’ being this [Japanese] term that suggests the milling about of people. During that video, people reacted very positively to it on social media. They thought it was something fun, something very Nintendo, uniquely Nintendo that few other companies would necessarily go with. I think it works, I like it. It’s fun.

A lot of people didn’t think Wii was a great name… that seemed to work out pretty well.

Are there aspects of Japanese culture you would like to see more embraced here? And vice versa—are there parts of the Pacific Northwest, say, that you’d love to have integrated into the other’s lifestyle?

For me, the other thing was when coffee finally really exploded in Japan in a way that was much more convenient. When I lived there, I would wake up in the morning and want to get a cup of coffee. There was one particular time we were traveling in Kyoto. I woke up, it’s 7 o’clock in the morning. Nothing was open. There’s no coffee around. We finally found this one place. We wanted to get coffee to-go, but it was a sit-down restaurant. They said, “Yeah, okay, we don’t usually do this but we can make it to-go.” They put it in these paper cups. And then they brought out this Styrofoam cooler-like thing. They neatly put the coffee in the cooler, I guess to keep the coffee hot? And we were like, “No, no. We just want the cups.” [laughs]

Trinen’s PR rep: New York is like your utopia. We have trains and coffee.

Most people know you as your role in translating for Miyamoto during press conferences. I was curious about that relationship. Do you confer with each other about what to say, or do you just go out there and translate what he’s saying as he’s saying it? How much of a back-and-forth is it?

We’ve been doing this since about 1999, which is a long time. I can’t believe how long that is. [Miyamoto] is a lot of fun because he is very free-spirited. He knows what he wants to say. We’ll work together on the script, I’ll put that into English. In that process, I may suggest changes to it, he may suggest additional changes. He’s a tinkerer. He’s a craftsman, by trade, really. It’s what he does. He always wants to make everything as good as it can be, up to the last minute. So there’s always late changes.

But the best part is when we get out on stage, and then the script really just becomes a sort of bullet-point, or a guideline. He doesn’t read off the teleprompter. And so I don’t really get to read off a teleprompter. In fact we’ve had years where he has a teleprompter in Japanese, and I have nothing. [laughs] And so I just have to listen to him.

A lot of times, if you watch closely, if you ever catch him saying something and kind of glancing over at me, that’s his way of saying, ‘That was totally off-script.’ He’s looking to see if I’ve caught it.

Miyamoto just turned 60 years old. You probably don’t know what he wished for, when he blew out those candles—I’m not even sure if that’s a Japanese tradition…

Not as much as it is here.

But if he did, I wonder if you could imagine what he might have wished for.