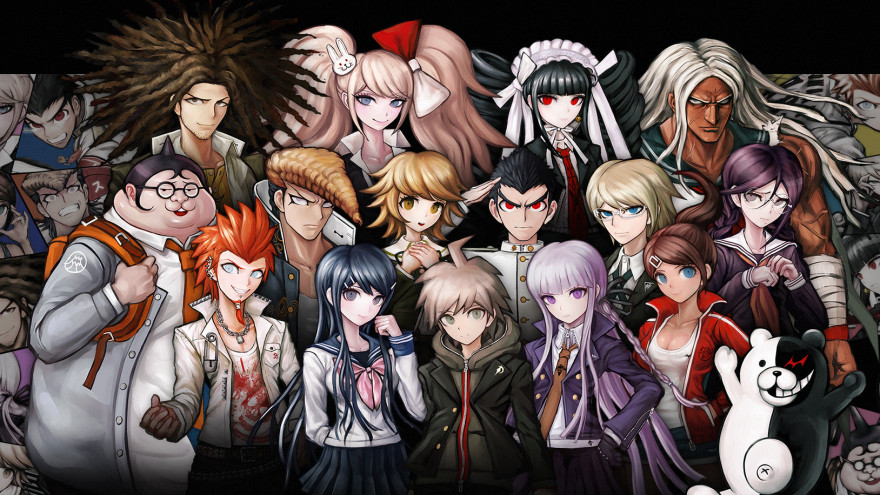 Standing, at last, in front of the door, Junpei grabbed hold of the L-shaped handle. A push yielded no movement, and a pull the same result. A few more tries cemented the truth in Junpei’s mind: it wouldn’t open. It didn’t matter how much he pushed and shoved. The handle wouldn’t budge. — 999: Nine Hours, Nine Persons, Nine Doors

Told in the stupefied first person, Danganronpa is one long series of shocks. They land with flashes of light and the clamor of gongs and chimes, as the shaking screen shows us faces visiting the extreme stations of fury and terror. New concussions keep stunning brains that have already been shelled down to rubble: the game’s strung-out teens are always finding another body, watching the execution of another friend, finding out that they’ve been lied to about everything again. They stagger through a test range of exploding theories. “That’s wrong!!” shouts the protagonist, shooting false words with “Truth Bullets” that shatter the screen, breaking dumbstruck expressions into glass slivers.

Danganronpa isn’t about love of the truth, but love of the game. It has a passion for rules, or rather for tricks in the phrasing of rules and their omissions. (It’s full of shoutouts to guys like Nobuyuki Fukumoto, for whom game systems are only a staging ground for exploits.) The regulations of Danganronpa’s murder game are carefully laid down in electronic handbooks given to the doomed students. New rules and bodies pile up as the game continues, and their appearances are usually linked.

It’s proudly nasty, yellow pulp, moving at the speed of drive-thru and not trying to look good. Outside of conversations, which are always played to the hilt, the presentation is oddly spare. The game flops down art like a losing hand, throwing all the tables and chairs into place just after you enter a room. The hanging lights are still swinging down from the rafters as they load. Looking normal would be less work; Danganronpa was made to look gamey. 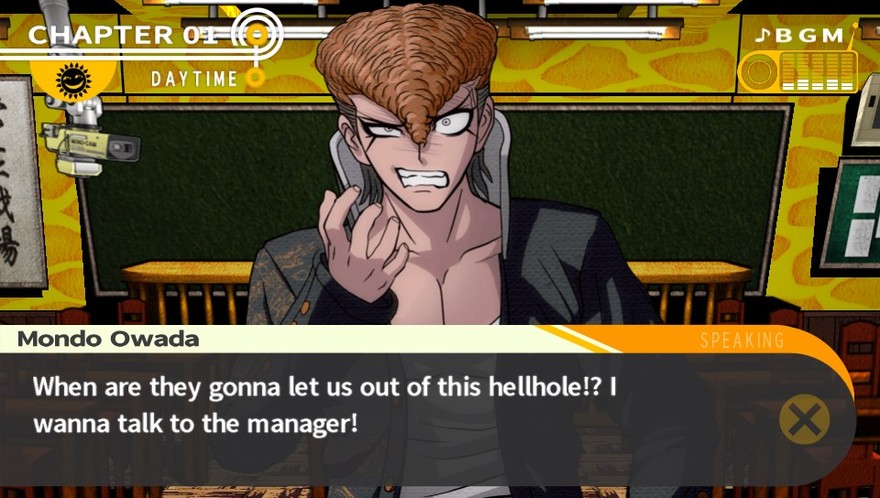 Characters pop up like they’re mounted on stands and wobble back when your interrogative “?” strikes them, starting a conversation. You can tilt the camera, using the shoulder buttons, to see there’s no back to them. It’s a 15-person (give or take) roster of E.M. Forster’s “flat” characters, literally “no thicker than a gramophone record.” The game uses them as pieces, not types but stand-ins for whole genres, the marker of the gambling story or the mystery. Even Forster wasn’t saying that flat characters don’t work, only that they don’t run on their own power. Danganronpa has energy to burn, and it takes every chance to smack its pieces together in howling collisions, trying to split the narrative atom.

It makes characters’ shouting matches a pleasure to listen to, which is a surpassingly rare achievement in games. Rather than voicing the full lines, actors let out short squawks when a new box of text pops (a bit like speakers in Ocarina of Time): “Could it be…?” “Conspiracy!” “Such ignorance.” The writers like to bounce a conversation around between a full conference room of these guys, so that all the dissonant yelps are firing off while you watch a carousel of gaping or actually frothing mouths spin by on the screen. Faces snap from tranquility to horror in the second it takes to press X and bring up the next line, as flashes of light and thunderclaps announce exploded notions. Danganronpa could be this year’s funniest game—certainly the funniest set of variations on the theme of “despair.” The finger-snapping pace of dialogue, punctuated by those short sharp vocalizations, does all the work.

The game uses characters as pieces, not types but stand-ins for whole genres.

The game moves fast, but never loses its sense of timing. The Sunday comic artist, working on a tiny canvas, has to know his rhythm better than the graphic novelist. Within the tight frame circumscribed by its rulebook and rigid characterization, Danganronpa wants to land every stroke in the right place. Lines of setup and payoff are drawn with great economy, and their clarity makes them easier to subvert. The bombshells are assembled quickly, and there’s little travel time before they reach us.

Danganronpa’s peers do not move nearly so fast. 999, another visual novel built around a killing game, sought by slow torture to bring an end to all pleasures of reading. In the quote at the top of this page, taken from the very start of the game, it takes six wandering sentences to say: “the door was locked.” Text in 999 crawls onto the screen slower than you can read it, which feels like being trapped inside the mind of an idiot as he arranges his thoughts. The pedantic description (“L-shaped handle”) is doubly useless given that a picture of the door handle is actually filling the screen. Reading through a scene in 999 feels like dying of old age. Advancing its plot is like playing through a long first-person shooter as a man with an ostentatiously funny walk.

The highest compliment I can pay Danganronpa is to say that its prose style is nearly invisible. As I moved forward, I did not see my feet.

When you break down this kind of murder mystery, there are four basic types. The first type is when the locked room is created after the actual crime is committed. This simply means that the killer commits his crime, then through some special method seals the room…The second type is when the locked room already exists before the crime is committed. Basically, the killer uses a special contraption or tool from outside to target the victim inside…The third type is when the killer stays in the room until it’s opened up. They stay hidden, and when the door is opened, they use the confusion to blend in with the group…And the fourth and final type is when it wasn’t actually a locked room at all. By that I mean, there actually is an alternate escape route somewhere in the room. —Danganronpa

It follows the reverse of Raymond Chandler’s famous recommendation in “The Simple Art of Murder” that, following Dashiell Hammett, murder be committed by “the kind of people that commit it for reasons, not just to provide a corpse.” The flat pieces in Danganronpa do not resemble the kind of people who exist at all, much less the kind with reason to kill someone. Regular production of corpses is dictated by the rules of their game. Their situation is vastly more formalized and artificial than the airless parlors that disgusted Chandler with “the same old futzing around with timetables and bits of charred paper and who trampled the jolly old flowering arbutus under the library window.” Danganronpa is some ascended form of what he hated, in which realism is completely discarded and the pleasures of the format are all. It’s always reminding you that it’s a put-on job, because it loves put-on jobs, and wants to show you how they work.

After a short period of table-setting, the game turns into a lavish banquet of crime scenes, an embarrassment of clues and lies. Each bloody discovery is a mess made to hide the sharp edges of character that snap together later, at the end of the chapter or the whole killing game. Danganronpa isn’t sentimental about offing the characters whose minds get rocked into jelly by too many Twist Impacts (not a real mechanic). It’s all about setting up the detective beat, making you feel out the shape of a missing fact before you can slide it into place.

Regular production of corpses is dictated by the rules of their game.

And the old thrill is there, in the face of every objection from lit crit and cooler heads. As in Phoenix Wright games, the cases are rarely stumpers—you’ve usually got a line on who did it, and maybe why. But every time, there’s at least one piece you didn’t figure out, a detail that eludes you until the last reveal. And if you don’t manage to build the whole picture yourself, somehow, the mystery still kicks you at the end.

The collection of evidence in Danganronpa is not novel, but its examination is. The peak of the project’s senses-shattering aesthetic is its conversation game, which roars to life in chapter-ending, game-defining Class Trials. (Conversation mechanics themselves are another discreditable idea, associated with dating games or breaks in the “real” action of an RPG.) It thrusts us into the center of those huge arguments, unshackling the adventure-game camera and letting it spin wildly as 15 students share their typically useless opinions (the dead are later replaced with mute placards). Your evidence is chambered into an orange revolver and used to headshot flawed statements as they float by. A stuttering picture-in-picture view zooms to speakers’ faces as they confidently declare untruths. It feels like someone at Spike Chunsoft hated team meetings. 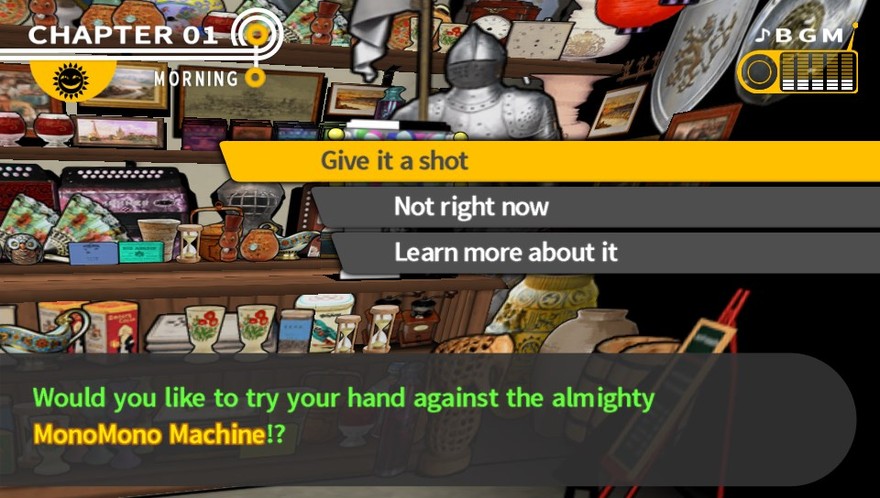 The familiar conversation game of Dragon Age, Persona, Alpha Protocol, et al. is a multiple choice test and a social minefield. The games suggest the incredible ease with which a person could ruin their own life or the entire world with one slip of the tongue. They model the horror of saying things you can never take back. Danganronpa, on the other hand, is about the incredible difficulty of changing another person’s mind. Even as you try to shoot down their arguments with ironclad facts, lines of “static”—irrelevant statements made by other characters—drift in to block you. Once you’ve destroyed a statement with logic, you need to play a rhythm game in which you simply shout the suspect down, and finally have to piece the entire case together into a comprehensive illustrated narrative. You fight for every inch of ground, and that feels only right. The old summation scene, in which one of the “asinine characters” that provoked Chandler coolly lays out the crime and collars the villain, would never play. In games the world itself is asinine, and we need to grapple with it ourselves to feel any connection.

Danganronpa will repel many because of its anime dressing, its unapologetic linearity (“better than a curve or an angle”), and its devotion to the lowbrow. I haven’t mentioned the uneven voice cast, or the way its theme of dual natures leads to some dubious character notes. That stuff is the static. What’s real about Danganronpa is its drumbeat of gags and shocks, the speed with which it sets a table and then kicks it over. It will be appreciated by people with a strong stomach for the absurd. Fortunately, that includes pretty much everyone who can stand to play games.