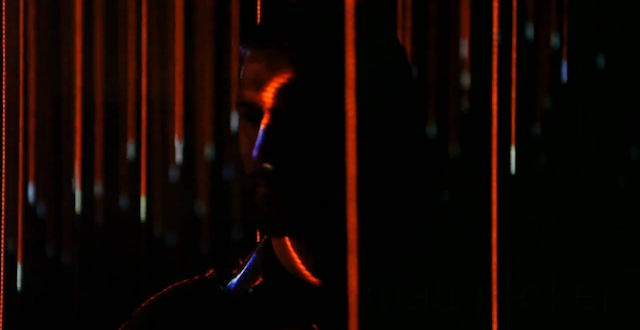 According to the indices of Google, Lumarca is a volumetric display, a visualization project, an interactive art installation, an open-source initiative. What these latex-glove descriptions fail to convey is that Lumarca defies geeky words, often stopping onlookers dead in their tracks, slack-jawed and eyes agape. Suspended halfway between physical space and real digits, Lumarca is hard to explain.

Here are a few things it reminds me of:
-The light cycle scene from Tron.
-An early prototype of the first game system that not only looks 3D, but is 3D.
-A homage to the Fortress of Solitude, where Superman went to chill while glimpsing the Aurora Borealis through glowing icicles.
-What the Ark of the Covenant had in it.

Lumarca was built in 2009 by Matt Parker and Albert Hwang, two young, scientific-minded New Yorkers. They have been improving it ever since. Matt is an installation artist and game designer who also curated the games at Kill Screen’s GDC ’12 after party (where Lumarca didn’t make an appearance, but gourmet grilled cheese sandwiches did!). I called him on the phone and sent him a bunch of emails to find out what their holographic cube of pure light really is.

Lumarca itself is just a display. You can think of it as the screen on your computer. It doesn’t really matter if it is connected to a keyboard or mouse. An iteration was connected to a virtual reality glove called GlovePIE. Another was connected to a volumetric input called the Mud Tub. That’s exactly what it sounds like: a big tub of mud that you stick your hands into and move the mud around to control things. It was pretty great!

How does Lumarca work exactly?

It is a very simple technique with very complex math behind it. The idea is that you have an array of strings––normal white cotton yarn––that has been precisely aligned throughout depth. We have a projector that knows where each of those strings is. It projects lines of light onto them, giving the appearance that each string is moving backward, forward, left, right, up, and down through all three dimensions. This creates 3D animations, and 3D objects that can be moved around.

So you set it up at different galleries?

We make large installations. The largest one to date has been 15-foot cubed. We are scheduled to make a 30-foot one in Guadalajara next month.

What was your inspiration for Lumarca?

My original desire as a media artist, before I had any idea how to do it, was to make a three-dimensional representation of a person that could be controlled with your body. When we made Lumarca, we were halfway there, but it wasn’t until the Kinect that it was possible. The one I like the best, you were controlling a little 3D puppet of yourself inside the strings. When we hooked it up to a larger Lumarca, it felt like controlling a Mech Warrior––a giant version of yourself that was swinging through the lights.

Your other recent project is Recurse, a motion-controlled camera game that’s now available for iPad, which was originally commissioned by NYU Game Center. Have you ever considered doing something like Recurse inside Lumarca?

We turned Lumarca into a game for the 15-foot version. A block would appear in the corner––say, in the front, left, bottom corner. When the player’s avatar touched that corner, they got a point, and the block would move to another corner. But I honestly liked it better when you were just having fun controlling a giant version of yourself.

I noticed that you separate your work into two categories. You have interactive art installations and you have games. What’s the difference?

That is an arbitrary distinction in my eyes. I only have that distinction because other people make it for me. I sort of don’t see them as separate, honestly. I believe all the games I make are art. Recurse is a work of art because it is a game. Lumarca is a piece of art that runs games. There is a great quote by Theo Jansen. “The walls between art and engineering exist only in our minds.” And I believe that. I marvel all the time at complex systems that are completely functional. Culture just hasn’t decided to recognize it yet.

Do you notice a difference in the way people approach Lumarca and Recurse?

Recurse has the goal of getting people to drop their inhibitions and be open to wonder, but people have a sneaky reaction to it. They are sort of skeptical at first: “Yeah, okay, I get it.” Generally by about 15 seconds in, they are going nuts––jumping around, shaking their hands––in a way they would probably be embarrassed to do if they hadn’t lost themselves in play. The game system has gotten them to the place where they let go.

I marvel all the time at complex systems that are completely functional. Culture just hasn’t decided to recognize it yet.

Lumarca is much more of a visual… masterpiece. [Self-conscious laughter.] I don’t want to overstate it, but it is striking to people when they see it. They are immediately struck with a sense of awe. As soon as they see it, they just, stop. It’s very, very powerful. Photos don’t really capture it. Honestly, a video doesn’t capture it that well either. It’s really hard to convey this 3D medium through 2D lenses. There’s not a great way to know what it feels like until you are actually in the presence of it. It gets people to drop their inhibitions, drop whatever they are thinking about, stop trying to be guarded, stop focusing on their outward appearance, and let something come in and affect them.

Does it still affect you?

It still happens to me. When we are setting up a large-scale one, Albert and I will ask, “Why do we do this to ourselves.” It is a lot of work to actually create one. Once it’s done, we turn it on, and it’s like, “Oh yeah. That’s right. This is why we do it.”