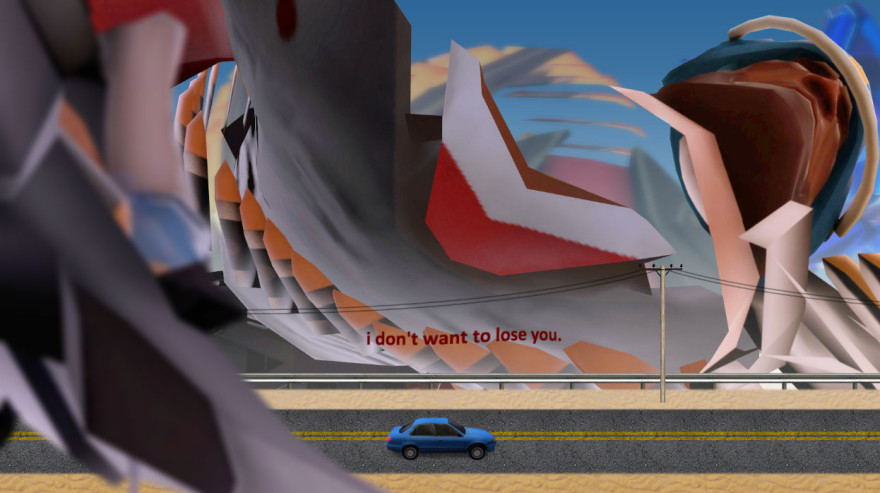 There’s an eight-year-old save file on my PlayStation 2 memory card that I created to help mend a relationship. It never got its chance.

If you load it up in Shadow of the Colossus, you’d have defeated 14 of the game’s 16 colossi, as that’s the point we had reached when playing together—my girlfriend at the time and I. She made me promise to not complete the game without her. But we saw each other once a fortnight at that point, due to both of us working and going to college, and I was enraptured with the game’s mystifying fantasy. And so I broke that promise by completing the game by myself. She took it harder than I had anticipated. Hence the save file.

due to the fragile tissue of our memories, these clips are distorted

She never forgave me, and when I look back at that betrayal now, I see it as a pock mark in our relationship that got deeper over time until it was a dark trench.

I should have deleted that save file years ago but, well … I guess I’m still letting it go, all these years later. I envision a Hollywood-style re-romance in which we eventually complete the game together, meaning that I never really broke that promise. It’s not the only lingering fragment: there’s the red rubber key ring she gave me that I still have in my backpack, and the rare scent of coconut body butter still conjures old ghosts of feelings.

Shadow of the Colossus isn’t the only game tainted by love that I turned sour. My depressing dependency on Call of Duty: Modern Warfare 2 drove a wedge between myself and another girlfriend about five years back. She was right to shout at me, to tell me that I cared more about the game than her—I did, and realizing that is why I sold all four Call of Duty titles that I owned the day after. It didn’t help much.

I think about these games now, games that I haven’t played since these incidents, and I see only half-second clips before they’re intercepted by the arguments and the tears. And, due to the fragile tissue of our memories, these clips are distorted, blurred with the years; glowing images in the dark, growing ever distant on the crappy portable TV I played them on.

The mutilation of these 3D models limns painful memories

It’s almost as if I’m seeing these games through a fractured peephole into the past. It’s this that Kent Sheely’s devastating freeware game Exquisite Corpses portrays. He says that it’s about “irretrievable breakdowns, traversing bad memories, & finding majesty in the trappings of failure.”

To this end, Exquisite Corpses is made of three distinct parts. You drive a car along an empty 2D road, slow and lonely, a situation that naturally imbues reflection and thought. In the background you pass by snippets of heartbreaking text, conversations that only have one resolution: a break up. They’re from a “chat transcript between two people on the verge of ending a relationship,” according to Sheely. The text is remixed with each playthrough but it has the same effect regardless of the order.

What’s most striking and telling about Exquisite Corpses is the shattered 3D models in its backdrop, like a city frozen in time as a nuclear bomb rips it apart. Most notably, some of these models are taken from videogames, especially the ever-popular Team Fortress 2. (That seemed especially relevant to me as a guy I was friendly with a while back failed at upholding a relationship due to playing that game far too much—he had put in well over 1000 hours of playtime into it.) The “Heavy” from that game is blown up across the sky, torso ripped and stretched into grey patterns, while a see-through shoulder reveals its shallow artificiality (see the screenshot at the top). Text in front of it reads “i don’t want to lose you.” The mutilation of these 3D models limns painful memories, self-destroying regret.

These are ruptured impressions of games once played; the victim of a person torn up by their own disquieted remorse. More than anything, they come to represent time spent selfishly rather than with a partner. These are the wrong memories to have—it should be smiles and kisses, not a fixed stare at a TV screen and a murmured “just one more go.”

Videogames wrecking relationships was big news a few years ago. There were polls and proof that people playing games for too long were driving people apart. I saw it constantly in my Facebook feed back then, mostly from women dating men, moaning that all their lovers did was play Call of Duty. I know first-hand how the situation tends to pan out from that initial complaint.

And so I wonder, how many others are out there who share the same tattered memories of videogames that destroyed relationships? My impression is that it is a great many. All we have left now are videogames. There is no one to share them with.