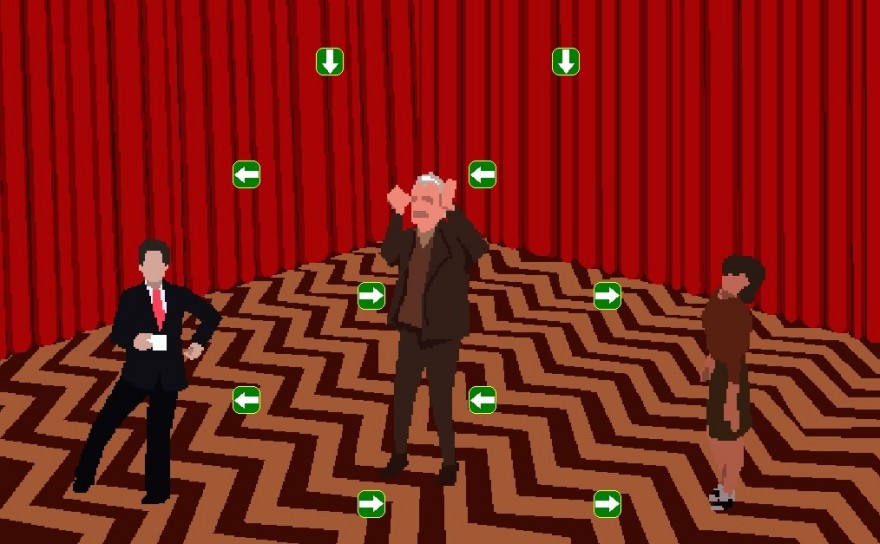 Of the many peculiar clues that the dwarf in the Black Lodge gives Agent Cooper throughout Twin Peaks, dancing is one of them. Not just any dance, an awkward 1940s-style jazz step with a machine-like sway and disjointed rhythm, all of it operating from the elbows and shoulders as if his arms had minds of their own.

Due to being given this clue at the beginning of the series, every time someone started dancing in the show, we sucked in air and wondered if that scene would tell us something more about the murder of Laura Palmer. This is what director David Lynch probably wanted. We examined those dancing scenes with intense stares as they told us more about the character the camera intimately focused on.

someone has made a Twin Peaks videogame that is all about dancing.

Anyone who has sat through the first series of Twin Peaks will know that Leland Palmer is the dancer to keep an eye on. After losing his daughter he constantly shuffles between fits of depressed weeping and absurd grasps at happiness by getting someone, anyone, to dance with him. No one usually wants to dance with a crying man and it breaks his heart every time. Through his dancing he projects his inner feelings and creates his own physical metaphor for the abandon he feels.

But he’s not the only one who dances. Perhaps even more odd is Audrey Horne’s lone dance in the middle of a café. She throws her head back as if making love with the music, only moving on the spot, letting her arms out to the sides on occasion as if pretending to fly or to move her hand through silk. She normally has the ditzy gait of a schoolgirl or, if she’s spying on someone, a more careful tip-toe approach. But when she dances in this scene she seems possessed (which is surely not an accident) and completely lost in her own little world. She’s haunted enough, it would seem, to at least break the social conventions that may stop any of us suddenly getting up in a public place and dancing by ourselves—we won’t even dance alone at a club.

Anyway, all of this is to say that dancing is important in Twin Peaks—more than it is in most other TV shows—mostly as it is a way to spotlight certain characters and let them express their feelings without resorting to less interesting verbiage. So it’s appropriate, and somewhat amusing, that someone has made a Twin Peaks videogame that is all about dancing. It’s ingeniously called Fire Dance With Me (a riff on the show’s oft-repeated line “Fire walk with me”).

It has you matching arrows to make either Agent Cooper or Audrey Horne dance. It’s two player so you have to be one of them as they dance off against each other. Leland is also there, dancing miserable by himself in the center of the Black Lodge. Audrey does her weird ghost-dance, and Cooper—who isn’t really the dancing type, so providing some comedy here—resorts to a chipper jig with his beloved coffee.

You can download Fire Dance With Me for free or play it in your browser over on itch.io.