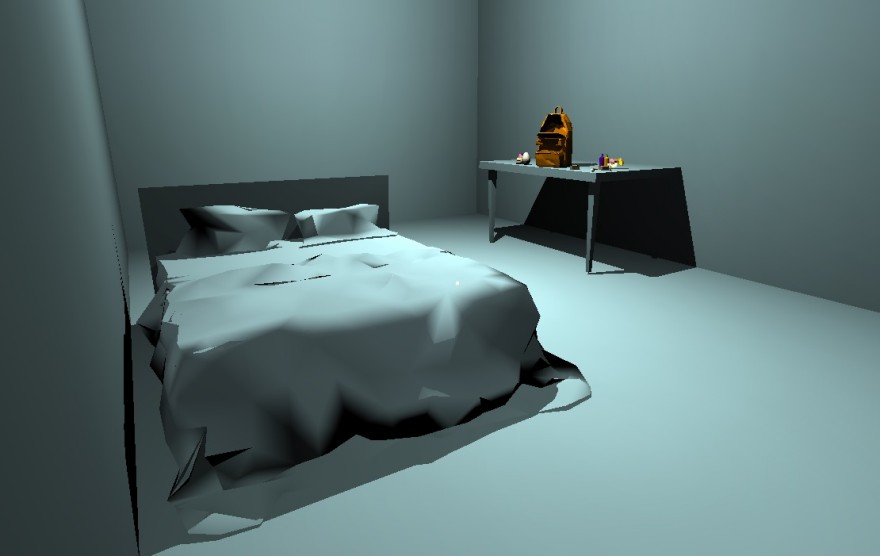 The first note of suspicion arises in two boxes sat next to each other on a desk. The label on these boxes is blurred beyond detail by the low-resolution—it’s possible to make out that it depicts a cylindrical instrument, white and red in color. I told myself it must be batteries for the nearby handheld radios. But I think I knew it was shotgun shells.

“You hold your gun up when in waist-high water. You push away tall grass. Button just for Adrian Brody voicing how much ammo you have left.” These are a few of the features of the 2005 videogame adaptation of Peter Jackson’s King Kong that appeal to LA-based game maker Brendon Chung. “What a goldmine of things brendon likes in FPSs,” he exclaimed about the game. Follow Chung online for long enough and you’ll piece together an understanding of this list of Chung’s likes. Body presence, finicky objects, mundane tasks presented in excruciating detail, inventories that correlate to a character’s available pockets, it goes on.

a chopped-up series of reveals

In short, Chung loves it when a virtual world sells its own physicality entirely, not through hi-def graphics or similar benchmarks, but through physics. Especially, that is, if they acknowledge the ultimate imperfection of simulated physics—a kind of slippy, uncontrollable friction. This is what Chung loves to see in videogames, both the ones he makes and the ones he plays. It’s why his latest (co-designed by Hyper Light Drifter creator Teddy Dief) is all about picking up objects and putting them into bags or the trunk of a van. An entire story is told through this seemingly humdrum action.

It’s called Fitz Packerton. A name that shares a sarcastic artificiality with Ivana Humpalot from the 1999 Austin Powers sequel. Humpalot was a parody of James Bond’s love interests (like Chew Mee or Honey Ryder), acknowledging that these women were so one-note that their names act as a label, describing their entire existence exclusively in its service to Bond’s dick. And that is often all author Ian Fleming’s plots afforded these women. Fitz Packerton shifts that same parody to videogame protagonists, whose purpose is only to shoot guns, drive vehicles, or, in this case, pack bags. This character is called Fitz Packerton and with them you will pack objects so that they fit into bags.

But don’t get the wrong idea. Fitz Packerton isn’t concerned with you ensuring that each object fits neatly into its designated vehicle. It’s not that precise or meticulous. What it does want is for you to pay attention to its individual objects, on their own and in relation to each other, as it is through them that its story is told. It isn’t so unusual for a videogames to let the objects it has you handle tell a story. What is a little more unheard of is for the story to be told exclusively through these objects. And it’s this bold ambition behind Fitz Packerton that likely informs its unmissable theatricality.

The game unfolds in four distinct stages, with the completion of each stage opening up one of the walls enclosing the space to allow access to the next stage. In this way, the spatial design of Fitz Packerton resembles a theatrical stage when divided by curtains. You could probably say that about a lot of videogames, but in Fitz Packerton the comparison is distinct in that it doesn’t try to transition between these spaces naturally, nor does it try to sell the surroundings as anything but dull, grey virtual walls. This is clearly an artificial space and you have no choice but to recognize that. What this achieves is channeling all your attention onto the objects in each space. By doing so, it’s implied that these aren’t objects without a purpose, rather, they are props, and as the word implies, they are meant to support the narrative with the authored meaning they have been given. It’s a chopped-up series of reveals, with each new set of objects changing your understanding of the character, their destination, their intention.

you can see its artificiality playing out

The biggest tell of Chung and Dief’s approach to presenting Fitz Packerton‘s story comes at the very end of the game. Once it’s complete—or, at least, the narrative is over—you are left unprompted as its last action plays endlessly on repeat. Given a static camera angle and unable to move at all, you are left no choice but to press the Escape button, hoping that it’ll let you exit the scene. Here’s the thing: When you do hit that Escape button, the camera snaps you back to the first-person perspective you had before, letting you see that final action play out in its raw nakedness. Removed from the static angle that you’re supposed to experience this action from, you can see its artificiality playing out; how, through animation and sound, an illusion of a real-world event is created so that you can derive meaning from what amounts to a bunch of code enacted on virtual objects.

This moment could rightly be called a Brechtian act of breaking the fourth wall but, by now, it almost deserves to be Chungian. At the end of Chung’s 2012 first-person game Thirty Flights of Loving, you are thrust from the final scene into an art gallery, where you view the credits hung up on walls. It’s almost like a lobby after a stage show, where the audience gathers to discuss the play and sip on chardonnay. With this, Chung seems to encourage the notion that you’ve just seen a piece of entertainment meant to be considered from a distance. It goes against the usual efforts of a videogame, which is to try to sell itself as another reality that you can can immerse yourself in. Further, Chung provides an optional developer’s commentary in Thirty Flights of Loving, in which you play through the game as normal but have him explain every decision he made along the way. Every object placement, every virtual environment, every camera edit he made is revealed for its artifice. It’s akin to a magician revealing their tricks as Chung breaks the entire game down, almost going against his own work. But in doing this he shares his interest in the pained attempts at simulation and imitation that videogames often attempt. He celebrates videogames as unique magical theaters of illusory artwork and coded physics made for us to absorb and interpret.