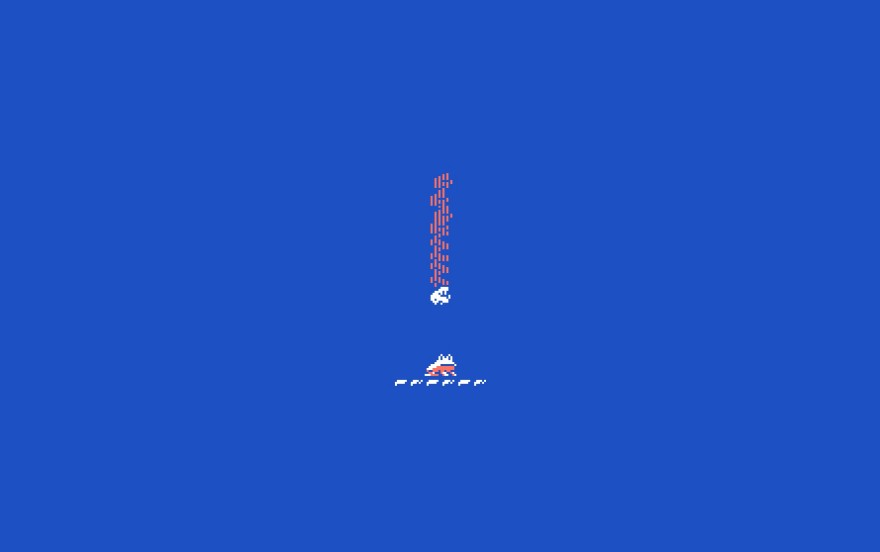 Starting a combo reminds me of a first kiss. It feels like you’ve been planning this in your head for days in between tentpole thoughts, but no matter how long you’ve meditated on it it’ll just catch you by surprise. You didn’t get to put on a bungee cord, you’re just falling into it, stumbling and crashing through, deeper and further in a beautifully awkward way. You can’t tell if you should try to break the momentum or just roll with it. You don’t know if you should stop while you’re ahead and deke out completely. You just know, even with a couple of dings here and there, it seems to be magically working, and you’re shooting laser bullets from your lil’ feet and there’s a giant glowing screaming skull chasing you. This is how I remember my first kiss, anyway, and it’s also how I remember one blissful day last week. For the first 24 hours of its release, I was #26 on Downwell’s leaderboard for biggest combo. I didn’t even notice when I pinned that chain; I remember it like I remember eating a potato chip. If I had to guess, I probably just hit a bat after a turtle after a floating blob after an angry frog uninterrupted by landing or an attempt to do anything more calculated. It began and ended in a speck of time. I have fallen on the charts since then. I have also racked up larger combos, learning how to weave my way around blocks and enemies. Hell, I finally noticed you actually get rewarded for big enough chains, sprinkled with gems and upgrades.

Downwell is the teeny-tiniest roguelike. Leaving little question about its influences, it sounds like Spelunky and looks like a Vlambeer production, and, like those, you’ll quickly begin to feel like this is a game you’ll be losing a large chunk of time to. It is the procedurally generated version of falling in Metroid II: Return of Samus: you’re navigating a harsh downward tunnel of spiney assholes, energy capsules and deja-vu caverns. You’ll find a variety of feet cannons to fight back with. You’ll be acquainted with getting extremely angry at videogame bats in a fresh, brand new way.

While it’s easy to see Downwell as part of this larger family tree, there’s a key, maybe radical distinction. In Spelunky, or Luftrausers, or Downwell, you get better. You practice and practice, and, while some unlockables can change the dynamics of how you play, there aren’t any kinds of hail mary upgrades that will carry you to the finish line. But in your practices, in your familiarizing, you begin to make plays, patterns, routines, strategies, things you program within yourself that can ultimately lead to a better run if you lack the natural talent to destroy these games effortlessly. Downwell doesn’t have that last bit. In a wonderful way, it just fucks you over.

It is the procedurally generated version of falling in Metroid II: Return of Samus

You don’t know what the darkness holds in Downwell. You can’t look, well, down. You can stop and go. You can try to drop slowly like a bullet-storming feather. You can walk off the edge and see what happens. You can attack down, but not up, meaning that swarms of foes (like, let’s say, asshole bats) can get an upper hand if you aren’t careful (or you don’t have the Gunpowder Brick upgrade, which I tell you is handy for this exact scenario). Some enemies look similar but will react radically differently to being done in by a stomp or a bullet, meaning that even mercilessly wasting your ammunition in a marathon will have its detriments. I know it’s obvious when talking about these games, but Downwell drives home the fact that you just don’t know what’s around the corner. It feels truer here when you’re going down a hole. When you do get a chance to pause, it’s akin to catching your breath.

You don’t know which upgrades will be available at the end of every level. When the exact one you hoped for pops up, it feels like divine intervention. Similarly, you don’t know what items you’ll haggle with the shopkeep for. You don’t know if a wealth of gems are in that cavern, or a new gun variant (note: all the guns in Downwell feel equally useful, so I’ve never felt so ambivalent on having to switch. The laser cannon might have a slight advantage—not because it makes things easier, but because it feels nice.) You don’t know when you might be able to pick up another nibblet of health.

Downwell may not have the lifespan of Spelunky or Nuclear Throne, games that have continued unfolding over years for their players. But it also doesn’t appear to be aiming for such heights. Its focus is as straight and unyielding as the well down which it drops you. It is fun and addictive, but moreover it’s adrenaline-pumping and shocking in its barbarity. There are few ultimate right answers, but always the correct thing to do. You just have to roll with it. That’s falling in love, baby.