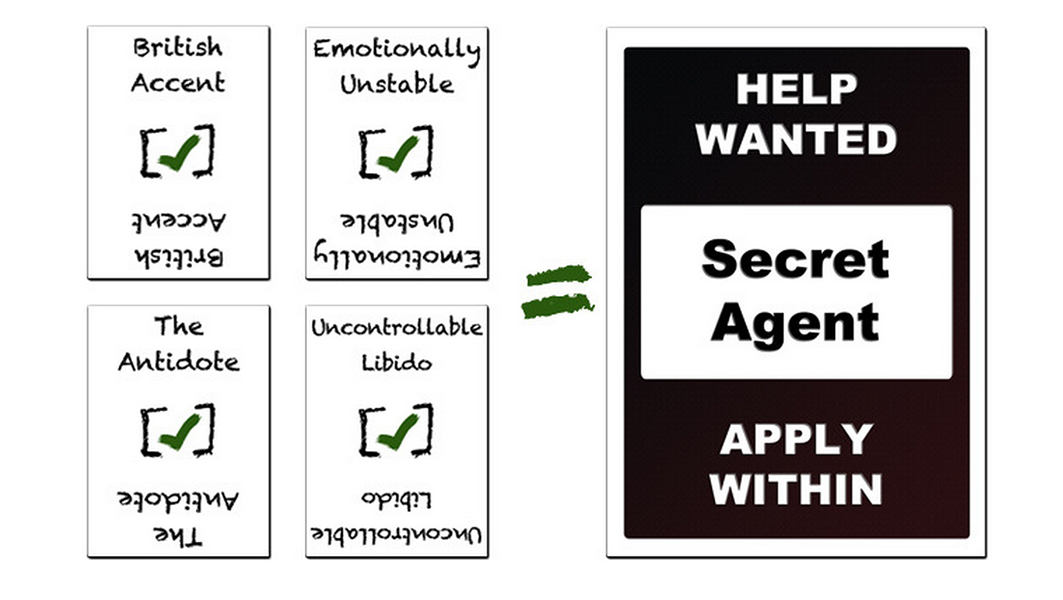 When I was introduced to Anthony Conta of Urban Island Games at IndieCade East, I was immediately drawn to his soon-to-be-released Funemployed! party game. In it, a judge places down a job card while the players apply for the job by spinning a narrative around their four skill cards, drawn fresh each round. This is much-needed levity for the anxieties and understated absurdity of trying to align our non-interest with what often appears to be made-up requirements for applicants, daring us to call the employers out on their seemingly earnest demands.

“I would play that,” I said. And I meant it, even though the word “funemployed” had taken on a darkly ironic meaning for me given a recent two-year period of joblessness and borderline starvation.

Friends of mine had handed me the word “funemployed” to wear around like a party hat on those rare occasions where I could muster the courage to show myself at a happy hour, during which I would nurse a glass of water. I would pretend that I was being virtuous about my health, though my clothes were baggy enough that I could simply pass for unstylish and it was not evident how severely underweight I had become.

turn that mania into charisma and you become the perfect candidate for whatever will afford you that next meal.

The narrative we prefer to believe about periods of unemployment is far from the reality; it’s said that this is an opportunity to travel the world and party 24/7 without having to worry about how a hangover will affect your job performance in the morning. I couldn’t tell if my friends’ envy was feigned for all my “free time,” but perhaps not. I never did let on how much day-to-day despair characterized my life, after all. But then, how was it not apparent? How do you hide the desperation and mania when you finally get an interview? How do you pretend that a starting salary of 28k for a job inundated with hundreds of other acceptable candidates—each of them every bit as desparate—is your dream come true?

Short answer: you fake it. Like playing Funemployed!, you learn to turn that mania into charisma and you become the perfect candidate for whatever will afford you that next meal.

“I’ve found I’ve become a lot more expressive from playing,” Conta told me during the release party at an uncharacteristically spacious Manhattan bar. Several friends and playtesters were drinking beer and having a raucous good time. Indeed, observing those applying for the jobs is almost like witnessing a game of charades, despite the encouraged use of all of the words you can think to say.

Each player had 4 skill cards dealt to them each round, and a community pool of 10 cards in the middle that they could swap out for before they made their pitch. Anthony explained to me that players were encouraged to argue with one another during each other’s pitches, especially if they had similar skill cards in hand.

After that, the employer/judge could decide to implement a second interview in which he or she narrowed down the applicant field to two candidates who would have to incorporate another random card into their pitch.

Unlike in Apples to Apples and Cards Against Humanity, the Funemployed! metagame is less about playing to your friend’s individual senses of humors and instead more about rewarding creativity. Conta also addressed his concern with the aforementioned games not being as interactive as he wanted, and that’s partially what inspired him to make Funemployed!.

I jumped in mid-game and drew a hand of “Experiments,” “Six-Pack,” “Indian Accent,” and “Fairy Dust.” I was applying for the job of Cheerleader, a job I desperately wanted even though I didn’t know it until then. Although I didn’t get the job, but I did have fun at a job interview for the first time in quite awhile.

Funemployed! is available for preorder on Game Salute and I’m told is officially releasing “during PAX East.”