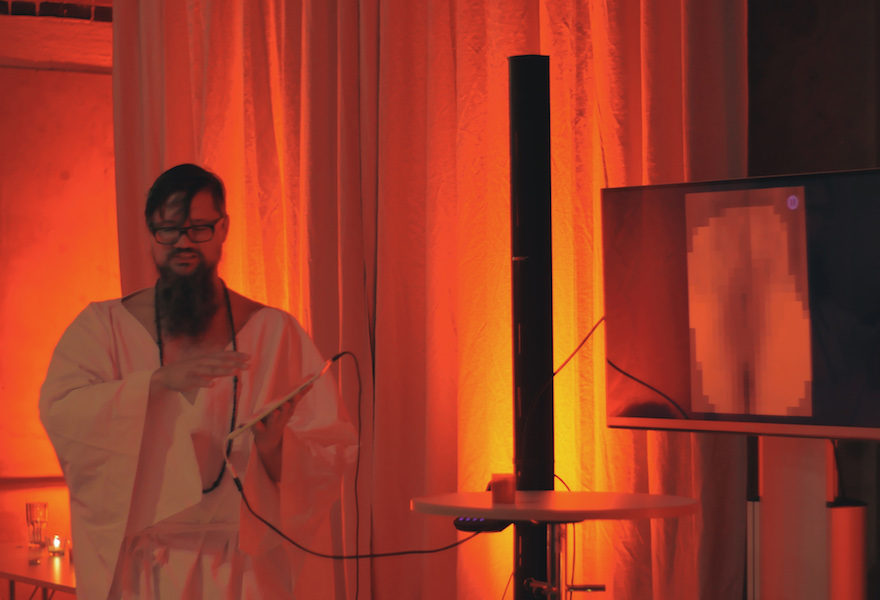 La Petite Mort is a smartphone game about timing, communication, and being generous. It’s also a game about sex, female pleasure, and sensuality. As is expected with pretty much any game about female sexuality, Apple rejected La Petite Mort for publication on its App Store on the grounds that it was inappropriate. The Denmark-based developer Lovable Hat Cult, who made the game, told me that even though Apple claimed to show support for the game’s themes of generous love, it still refused to publish a game that explores these concepts through sexual content. However, this raises a question: is it possible to have one without the other?

When you first load up La Petite Mort, you’re taken to a screen asking you to wear headphones. This is because, on top of everything else, this is also a game about music. You’re then given the chance to pick one of four different women, after which you are taken to a heavily pixelated representation of her vagina as a meditative and quiet song—uniquely composed for each woman—starts playing in the background. To finish the stage, you must prod the song to get louder and more intense through a series of crescendos, which involves carefully and conscientiously bringing your partner to climax.


Attesting to this, pleasing your partner in this game is not only about the pleasure of the player, for starters. If you try to go in hard and fast without any sort of foreplay, or only caring about your own needs, you’ll quickly find yourself rebuffed. Instead, sex in this game involves careful, timed, considerate motions that are designed to slowly warm your partner up and serve her needs as she lays them out for you. If you do well, she’ll respond with moans and the music will get louder and more intense, as waves of pleasure light up the pixels surrounding your touch. If you refuse to listen to her, however, she’ll respond by saying “no” or “nuh uh,” and the moment will be over, meaning you’ll have to start over from scratch. Each woman has different needs, and the result is a game where you have to listen to your partner’s feedback to find out how best to pleasure her, avoiding the temptation to be selfish and, instead, encouraging a representation of sex that is about two-way sensuality more than providing a service to the player.

sex that strays as far away from objectification as possible

The result is a game about sex that strays as far away from objectification as possible. The women the player interacts with here are instead full participants in the act, each with their own personalities and differing needs. These are people you need to get to know and listen to rather than, as depicted in games like the Leisure Suit Larry series or Ride to Hell: Retribution (2013), glorified real dolls. Consent is clear, must be consistently and enthusiastically given from both parties, and can be withdrawn at any moment. As Andrea told me: “There is purposefully no guide on how to play and no tutorial. The only way forward is to listen to the evolving music and to touch accordingly. Don’t go too fast, and don’t go too slow, move your finger sensually and perhaps teasingly.”

This method of play as avenue for partnership is an idea that the team members at Lovable Hat Cult has been developing over the course of their entire careers, as seen in one of their earlier attempts to tackle the subject back when they were still working with another developer- the Copenhagen Game Collective. Earlier this year, I got a chance to play one of these first forays into sexuality, a sound game titled Dark Room Sex Game. I saw it while attending an exhibit at New York’s Museum of the Moving Image called “Sensory Stories: An Exhibition of New Narrative Experiences,”  To play it, a friend and I went into a dark room with two PlayStation Move controllers, at which point we were told to swing back and forth to find a mutual rhythm. If we succeeded, we were rewarded with moans and pleasing musical tones, but if not, one of our remotes would cry out in dissatisfaction and we’d have to start over. Eventually, my friend and I found a pattern that worked for us, but before that, I continually struggled to sync up with her. She took it with good nature, but on my end, I felt shame. I hadn’t taken her movements into consideration and had focused only on my own, and that gave us a one-way experience that wasn’t enjoyable for either of us.

Shame is a rare emotion for a game sex scene to show, but it is a normal and common part of sex in the real world. Here, my shame arose from being too self-centered with a partner, and refusing to take her pleasure into account as well. I had underestimated the game, only expecting it to replicate the same player-first mentalities I had seen in other sex games, and I was appropriately taken to task for it. This was a game about sex that wasn’t afraid to make its players feel bad, meaning that I couldn’t get away with seeing my partner as just another checkpoint to clear anymore. Instead, like the real world, I had to talk to her, listen to her responses, and work with her for a mutually enjoyable experience. This wasn’t Grand Theft Auto, where the player is free to abuse other characters to their heart’s content, and only ever be congratulated for it. This was a game where I was held accountable.

To be fair to Apple, its policy states that it does not allow explicit sexual content on its App Store period, regardless of whether the pleasure in the game is strictly for the player or for all parties involved, and regardless of whether or not the game could be strictly considered pornography. All of this, however, does make clear that La Petite Mort does not exist simply to titillate, though Andrea did explain to me that Lovable Hat Cult does not intend to directly condemn any games that seek only to do so—”Pornography will and should exist.” Rather, it is a genuine artistic exploration of care, mutual respect, and consent. Sure, it uses sexual imagery to do so, but this raises a question of whether Apple should automatically ban all games with sexually explicit content in the first place, as if sex and related themes are not worth exploring in games at all. This would put games at a disadvantage compared to film or literature, for which exploration of even semi-related themes through sex is common. 50 Shades of Grey, for instance, is available for purchase on iTunes with no issues.

I asked Andrea about her experiences speaking with Apple, at which point she handed me over to another person on the team, Patrick. “We are happy that they took the time to call us and speak with us,” he said. “The guy I talked to was also pleasant to talk to; however, he did use the manipulation technique of building rapport with me by connecting with me as a European.” Patrick explained to me that the Apple representative told him, “For me, and for you as Europeans, we don’t find it objectionable. We are probably very open-minded. But the application needs to be available for a very wide audience.” To this, Patrick responded: “Does this mean that only European women have the right to sexual pleasure and stimulation? And not the American ones?”

He explained to me that, to get the game published on the App Store, Lovable Hat Cult would have had to change the game’s name, images, and sound to the point where they were being asked to “basically make a different game.” They refused, as doing so would have gone against the game’s central thesis of being a celebration of the female sensuality and mutual pleasure so many other sex games ignore, and the team took the game to Google instead. There, they have found more success. It is currently sitting on the Play Store with a Teen rating. Notably, having not even earned a Mature designation according to the ESRB standards Google uses when rating games for the Americas.

You can purchase La Petite More over on Google Play.