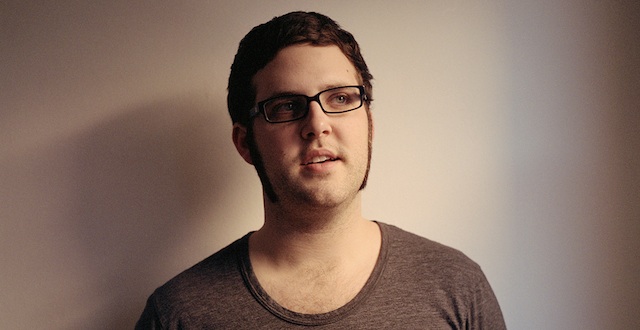 The music of Baths doesn’t clang, crash, or thud. It bubbles and oozes, glistening and gliding as if carried on the wind from some distant, oblique sentiment. Vulnerable and weird, Will Wiesenfeld’s lyrics delineate locales of gay eroticism and revelation. He’s an aesthete in the classical sense, judging from a look around his apartment: clean, organized, muted in color tones, filled with talismans of pleasure like figurines, comics, and Japanese pop-culture paraphernalia, each with its own designated area, each in its right place.

Wiesenfeld has been releasing music since his early teens, drawing from a multitude of sources, not least of which are videogames (his songs feature titles like “Turian Courtship” and “Pokémon Potluck”). Today we’re sitting in his living room in Canoga Park, Los Angeles.

You spent all of last year touring, and you did some touring early this year?

Not touring, but I did play shows. I went to Japan—it was awesome. We ended up going to this place called Nara, which is a day trip from Osaka. It’s the city of deer: The ratio of deer to people is one to 10. They’re all over the streets. I have all these videos of deer biting my butt and making weird noises and just chilling. It’s amazing.

I’m not trying to play any shows for a long time. I needed to get focused on the [upcoming] record. I’ve been so eager to start playing shows with the music I’m working on right now—it’s music that I have in my head as being the kind of music I make for the rest of my life…

You and your older brother both grew up with videogames. Have you been playing games since you’ve been back home?

Yes, I’ve been playing Skyrim a lot. It’s a beautiful thing to escape to and hang out in.

Do you identify as a gamer?

I don’t say “Yo, I’m a gamer” to people, but when people ask if I play games, then yes, of course I do. Growing up, Nintendo 64 and PlayStation were the systems everyone had. Especially in the West [San Fernando] Valley, every kid had them—every kid that “was” somebody had them.

Spyro was my first big thing. This was outside of the really cheesy computer games I played growing up. We played the shit out of Math Blasters, but the PlayStation was my first non-educational, exciting game experience.

Since you’re a musician, did you play PaRappa the Rapper back in the day?

Yeah, and I found it impossible. It was the hardest game I’d ever played.

I just replayed PaRappa recently and found myself thinking, “Wow, this is so much easier than I remember!” I think as a seven–year–old, I lacked the coordination to play it…

That’s why a game like Spyro is perfect—because it’s not about dexterity; it’s about exploration and casual immersion. I really love story-driven games, even if they’re simple. Limbo is a perfect example: It’s a small story, but it plays out perfectly over the four-or-so hours of gameplay. That, and Journey. That game plays a lot like how I listen to music—does that make sense? It’s almost as though I’m just weaving through it, letting myself discover things slowly. It’s so perfectly casual and inspires a very emotional connection, even though it’s not forcing you to do anything.

As a musician, is skill or mastery secondary to a process of discovery?

Yeah…and that’s not to say that I hate skill or something. In writing music, I’m never, never trying to force it down anybody’s throat. I’m not making any grand political statements. I’m not aggressive about it, and I don’t like aggressive games. I can get down with watching people play Halo or Call of Duty, but it’s not what I’m looking for in a game. Then again, I love Mass Effect—but that’s so story-driven, so….

“I don’t want to watch the character I’m playing, whom I think is so noble and has all these important relationships, go out and shoot people for fun.”

I faintly remember you writing an open-letter to BioWare back in the day, asking for them to include gay characters in the Mass Effect series…

It was right when Mass Effect 2 came out. The argument was more that, for the amount of depth and realism that they put into the games, to not have a single gay character—even just in the human race—seemed a little absurd. I wasn’t looking necessarily for a gay romance, but a gay character at least.

And obviously you weren’t the only person to speak out and ask for a more diverse cast, as BioWare included gay romance options in Mass Effect 3—

—And I commend [BioWare] on that. I think they did it very well. It did weird me out a little that my [romantic option] was with Kaiden, but it played out better than most of the straight romances in the game. My brother played as male Shepherd trying to romance Tali, but Tali died, so he tried to get with Liara, and [their make–out scene] was less eventful than when he didn’t make out with her. There was more emotional connection and more dialogue when they didn’t get together.

Are you a Renegade or a Paragon?

Paragon. I can’t stomach being a Renegade. It’s the same reason I can’t really play aggressive videogames. I don’t want to watch the character I’m playing, whom I think is so noble and has all these important relationships, go out and shoot people for fun. It’s very dark and weird to me.

…and then having go back and re-do it. Yeah. I do that all the time. For all that can be said about “choice” in videogames, there are some times that I can’t stand how many options I have and how ridiculous some of the options are. That happened to me in Mass Effect 3 a lot: I’d be faced with only two choices when, in reality, there was another option.

Is diversity in videogames important to you?

I don’t care if gay characters become extremely prevalent in games. It’s a question of the reality of a story. If a story like Mass Effect, in a universe that is so complete, doesn’t have any gay humans and there isn’t even a reference to why, then I’m troubled by it. Granted, in a game like Super Mario Bros. I don’t need a gay Mario. [Laughs] But it’s always disappointing when something in any medium has a weak storyline and doesn’t obey its own “ghost rules”—that’s a term my dad uses to describe a fictional scenario that breaks its own logic.

“The challenge of making music is in wanting to make music challenging.”

Would you say there are “ghost rules” to your music?

I’d like to think so, although I wouldn’t be able to identify them. The challenge of making music is in wanting to make music challenging.

You also mentioned earlier that you never aim to make aggressive music or push an agenda.

Yes—I want my music to be cohesive, not arbitrarily challenging, like a song that moves lyrically or narratively in a completely different direction than its music. But if it’s just sort of gimmicky, then that’s really bad. It’s really hard to find that balance.

Right. That’s what I’m trying to do. I have a lot of ideas going into songs, but I’m also trying to create something poetic, so it’s very difficult sometimes. Sometimes it comes naturally. I don’t really have any definitive answers for my own music.

I find it more troubling when people are entirely sure of themselves and what their art means.

I’m never sure. I get close, a lot. But I’m never completely sure.

That seems to echo with your interest in music as a mode of discovery for both listeners and creators.

The most exciting thing to me is when someone who doesn’t normally listen to my type of music loves my music. Of all compliments, that’s the one. That’s when you think, ah, I’m doing something right.