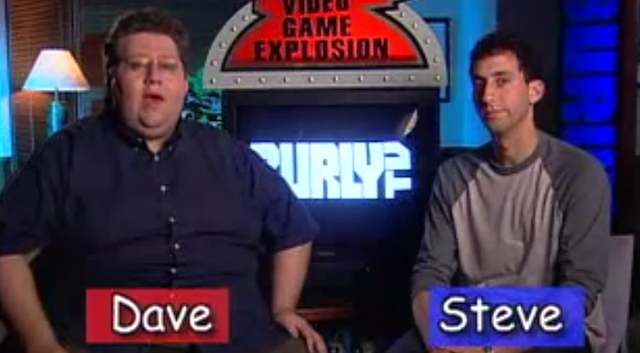 Although the series lasted only a few months, it was a prescient of future comedy success as Lookner went on to The Carson Daly Show and Mandel, who had already written for Seinfeld, continued on to Curb Your Enthusiasm and producing this weekend’s box office success The Dictator. We asked Mandel and Lookner to reflect on their short-lived television gaming moment, why arcades were bait for pedophiles, how to appropriately bribe videogame reviewers.

Did you guys play videogames in college?

Dave: Um, ironically and you almost probably won’t even believe this, I’ve actually never played a video game [growing up], which is weird. I was raised a Luddite, my family didn’t believe in technology in general.

I have an original Atari Pong set, just an all-in-one thing, that’s how old I am. Then I had an Atari 2600, then I had a Colecovision. Then I didn’t own anything for a while, thank god, I was able to attend school and get a job. When we were at Saturday Night Live, we used to go on unemployment for the summer and I would take the unemployment check and buy Nintendo games. So then I had all the various Nintendos and then into the Sony PlayStation, the PlayStation original, now the PS3 and the Microsoft whatchamacallit.

Dave: I’m an old man who can’t remember anything.

Where did you buy videogames during the summer here in the city?

D: The Electronics Boutique I believe it was called. Toys R Us didn’t come in to New York City until I was an adult. The first Toys R Us was on 34th Street, Herald Square, next to Macy’s.

Steve: It was a great place.

D: What an incredible place to be bothered by pederasts and whatnot. It was a great place to meet a runaway, it was just a fantastic place. Those are some of my fondest arcade memories.

S: Video game arcades were the best place ever for pedophiles. When I grew up there was this place called Fun and Games in Boston and it was this famous arcade where everybody went and they would advertise it on TV all the time and your parents would warn your before going that lots of bad things happened there, it was notorious. I feel like that’s a whole great aspect of our culture that’s not around anymore.

“We were suggested the gig mainly because they didn’t have a lot of money.”

I’d love some background on the show.

S: We had both written on Saturday Night Live, and we both left after a couple years for various reasons. We both basically had no real contact with SNL and then like six years later, we basically got a call saying “Hey Lorne Michaels is doing a video game show for his internet network, he wants you two to host it!” That’s literally what happened. Then we shot the pilot and they were like “Oh, Lorne Michaels has reached a deal with TBS and they’re going to run this on TV!” And we were like “Yeah, sure, whatever.” And we kind of didn’t believe it until we saw it the first night on TV. And even then we didn’t believe it.

D: When we were [at SNL] as writers, I guess the general view of the writers was that we were all a bunch of nerdy shut-ins. So it was probably a very backhanded compliment being selected.

We were suggested the gig mainly because they didn’t have a lot of money. So they probably realized that if they went out and got two really great looking hosts, then they had no money for writers. The  the idea was “Well how do we find people to host and write?” It sounds silly but obviously Lorne had had some success with Conan O’Brien, putting a writer on television and for what this was – again, I think, a backhanded compliment – “I know some nerds that like videogames, my old writers.” and I think we were still active so we started doing the show.

Right. Now what year was this?

D: The first episode aired right after 9/11. Most comedy TV shows went off the air for a little bit and then Letterman came back if memory serves and then everybody sort of copied Letterman. Our first show as a parody at the time of talk shows overestimating their own importance in the world.

We did an opening where we talked about in a post-9/11 world, should people even be allowed to play video games? Then, of course, the first thing TBS did was cut all of it out and so I think the first original broadcast, there’s a giant edit at the top of all the 9/11 stuff just taken out.

How much of the show was informed by what you already knew and understood about how television should or could work? One of the big problems with games and game culture is that it’s not often in conversation with other mediums or it’s not pulling best practices from other things, whether it’s comedy writers or something else.

Now were you guys having contact with video game companies about getting titles or were you just trying to see what you could pick up?

S: I think the biggest mistake the companies made in dealing with us is that they should have sent us more t-shirts. I only got one t-shirt ever, which was a Grand Theft Auto III t-shirt and I still wear it.

D: I don’t think the video game companies realized how open we were to just actual bribes.

Where were you guys when you got the call that the show had been cancelled?

D: That’s the beauty of it, I’m not even sure we ever got the call. I think Burly had had their phones confiscated and they couldn’t call anyone. There was no one to pay for the camera crew cause lord knows it wasn’t about us getting the money.

“I don’t think the video game companies realized how open we were to just actual bribes.”

What was next for you guys after that show?

S: Attempted suicide. I was working at The Carson Daly Show and Mind of Mencia and a bunch of things until 200. Then in 2007 I fulfilled my dream of going back to get a Master’s in grad school and I liked it so much I’m still in grad school. Dave, were you still doing Seinfeld then?

D: No, Seinfeld was over, soon thereafter, with two other guys I work with, we wrote, sold and made Euro Trip. After that I went to work with Larry David on Curb Your Enthusiasm. I should mention, since all press is good press, The Dictator, starring Sacha Baron Cohen will be coming out on May 16th here in America, please go see it.

S: Do you have a catchphrase Dave, that he could put in the article about The Dictator?