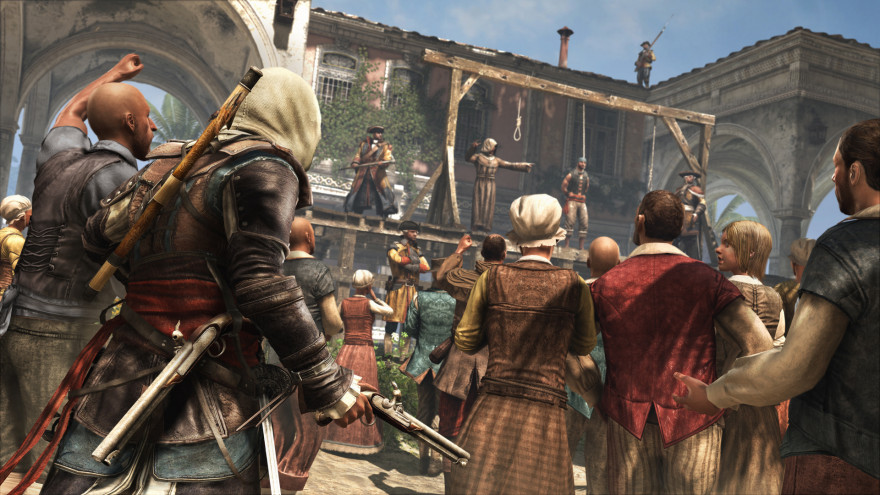 In Assassin’s Creed 4: Black Flag you play as Edward Kenway, the captain of the ship Jackdaw. You are a pirate, traversing the cities of the West Indies, as well as the waves and islands in between, doing all the fun pirate-y things you’d expect: looting, plundering, swash-buckling, and so on. But it wasn’t enough for the game’s lead writer, Darby McDevitt, to just choose the right setting. McDevitt wanted the game to be as factually accurate as possible; he wanted to defy the expectations players might have about pirates.

This is why, when his team came across a book called The Republic of Pirates, they didn’t stop at using it as a source. “We contacted (author Colin Woodward) and had him become one of our historians,” McDevitt says. “A number of pirates used Nassau in the Bahamas as their base, and from about 1715 to 1718 this was the center of piracy in the world. It’s where all the famous names settled like Blackbeard, Calico Jack, and Anne Bonny.”

McDevitt wanted to defy the expectations players might have about pirates.

It was a unique situation that these pirates came together to create, a time and a place that usually isn’t included our pirate myths. McDevitt said, “This group of pirates tried to make a republic, made and maintained by people democratically. Pirates were known to vote their captains in, much different than the Royal Navy at the time. But of course they weren’t statesmen, so their pirate republic hit turbulent waters very soon after its founding. So we tell that story.”

Woodard himself had been researching America’s colonial history when he became drawn into the subject of pirates by such surprising stories. “The golden age pirates were smack in the middle of the colonial world, their lives tying the old world, the Caribbean, the North American colonies, and the African slave trade together, a world of corrupt governors, superpower rivalries, and enormous differences even between British colonies,” said Woodard. “When I started digging into this pirate gang’s story—separating fact from fiction—I discovered it completely different from the myth, and far more interesting.”

The research Woodard puts forth in his book make these pirates the perfect subject for an Assassin’s Creed game, playing as a member of a secret society who opposes tyranny. Pirates were almost the Anonymous of their time: a loose group of skilled individuals that performed illegal activities purportedly for the greater good. According to Woodard, pirates saw themselves as freedom fighters rebelling against tyrannical ship owners and captains. “Some even called themselves ‘Robin Hood’s men’, settling the scores of the downtrodden and socking it to the rich and powerful” he said. “There’s lots of evidence that ordinary people on both sides of the Atlantic agreed with this interpretation and were rooting for the pirates.”

The public’s enduring fascination for a mythical pirate life does not surprise Woodard, though the reality was less unfettered adventure and more maritime entrepreneurialism. But, not unlike American cowboys myths or even Europe’s medieval knights, the more fanciful stories get the most attention.

“Pirates were folk heroes at the time, celebrated for their willingness to risk it all to live a free life, if only for a short time. Their exploits were the subject of a bestselling book, The General History of the Pyrates, which appeared while some of them were still active and was not unsympathetic,” said Woodard. “The stories in that book—some true, some invented—built the ‘pirate myth’ that’s come to us via the novels of Robert Louis Stevenson and the films of the Walt Disney company. People still respond to that impulse, that fantasy, that you could just cast away all your obligations and tormentors and go out and live free on your own terms.”

It’s going to tickle that pirate bone in people’s bodies.

Still, despite this grounding in history, the game may not be entirely free of those time-honored images just yet. “You are able to be in a little village, run, jump on your boat, chase another boat down, sail to some jungle island, jump off, all without loading,” said McDevitt, conjuring images of, well, Robert Louis Stevenson and Disney movies. “The immersion is so powerful that I think this is the pirate game that everyone’s been waiting for. It’s going to tickle that pirate bone in people’s bodies.”

It’s just that tension that Assassin’s Creed 4 must play with: the desire to, well, tickle everyone’s pirate bone while remaining true to the team’s historical aspirations. They’ve certainly embraced the mythical life of cinematic pirates while placing that action in a messier, more truthful world; whether that means they can have their grog and drink it too remains it to be seen.