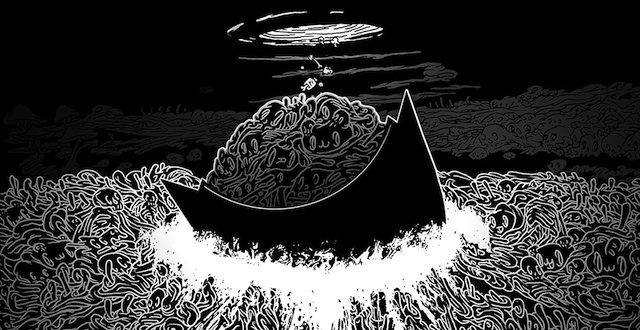 As a proper introduction indicates, the prog-metal-Buddhist-art rock band Yamantaka // Sonic Titan plays many roles. This is a sign of the times. We create stylized versions of ourselves on social media, and take on the part of heroes and monsters in videogames. This may sound like a fractured way of living in a postmodern world, but according to Ruby Attwood and Alaska B, role-playing is a practice older than the Buddha himself. Videogames too, with their emphasis on repetition and math, have similarities to the ancient ritual of meditation. We caught up with the band at Bottletree Café, a beer-and-a-shot joint in Birmingham, AL., to talk about cosplay, mathematics as a pathway to the infinite, and their new song on an upcoming videogame.

You did a track for the Xbox Live Arcade game Mark of the Ninja by Klei Entertainment, the developer of Shank. What is your personal investment in games?

Ruby Attwood [lead singer, bell ringer]: I just like the classics. I grew up on a farm. I didn’t have TV. I didn’t have a PC until 2003. I’m not a Luddite. I think technology is wonderful. I just haven’t had a lot of experience. We are actually planning on doing a videogame to coincide with our next album—a shooter game like Gradius.

Alaska B [drummer]: The one game I love to death is Earthbound. The idea is that you are a group of children running around fighting stop signs and stuff with yo-yos and bottle rockets. It’s endearingly goofy. But it’s also really deep. It pokes holes in culture. If you read into it, you can get lost in that game.

Aspects of your performance have been compared to cosplay. Is that something you relate to?

Attwood: I relate to the fashion aspect of cosplay. Some fans want to embody a character, and that’s fine, but there are also people who look at it as a serious fashion project. They won’t buy a costume from eBay. They spend years making a mecha costume from fiberglass. They buy real hair and sew it by hand to make their wig.

B: I’m fascinated by cosplay. Especially the idea that cosplay as a cultural practice is the result of the East being pulled into the modern world really fast after World War II. Japan had a god-emperor for many years. When you lose that aspect, which has been engrained in culture for so long, people need new idols. So pop idols took their place.

“But after a while, it ceases to be equations. The equations become patterns, and patterns become reflex responses.”

What about the aspect of dressing up specifically?

B: In shamanism, people would embody deities and literally believe they were them. Cosplay is another way of doing it. The obsessive nature of creating a perfect costume and being that thing is like the rituals of Mardi Gras Indians and Peking opera. It’s the same thing with people who glorify Chun-Li and dress like Chun-Li. There is a freedom you feel when you dress up as something else. It’s not about becoming that thing. You’re not really destroying your own identity, but expanding the bounds of what your identity entails. It’s no different than Buddhist people saying they are scared of death, and the only way they can deal with it is becoming Yamantaka and being able to defeat it.

Yamantaka // Sonic Titan is an unconventional band name. What is Yamantaka?

B: Yamantaka is a manifestation of the Buddhist deity Mañju?r?. Yama is the Buddhist god of death. The story goes like this: Yama was tormenting a village, so the villagers called on Mañju?r? to scare him away. To do this, Mañju?r? embodied Yamantaka. [The name translates to “terminator of death.”—ed.] He multiplied his number of heads, so that he could yell an infinite number of screams. He grew a thousand legs, so that he could surround Yama on all sides. When Yama attacked, Yamantaka grew thousands of arms. That’s a theme in Buddhism. Multiplication is the only way to understand exactly how big the universe is. We can only do so much through our own bodies. The concept goes beyond us into the infinite.

The band is known for wearing unusual costumes on stage. Is Yamantaka a role that you play?

B: They say that embodying Yamantaka is dangerous, because you can lose yourself into madness. You can evoke Yamantaka by imagining yourself as him and bringing out his nature. It’s about imitating what you are scared of. But you are straddling a dangerous line.

What is the relationship between Buddhism and metal?

Attwood: Death metal is very central. I am attracted to Buddhism because it addresses the ideas of nihilism and existential problems. There’s nothing. There’s just chaos, right?

B: In the temples, Buddhist practice involves either silence or chanting or repetition. There is repetition in pop music. There is sound and fury in Buddhist rituals.

What is the point of repetition?

I’m not seeing the connection. Could you give an example in terms of your music?

B: Have you ever played the drums? You have to turn your mind off. At the same time, you can’t turn your mind off and play. We have a song called “Counting Track.” It is determined mathematically. There is so much math going on. There are all these mathematical equations that I developed on the drums. While everyone else is chanting and singing, numbers are running by in my head. 1-2-3-4-5-6-7-8-9. 1-2-3-4. 1-2-3-4-5. 1-2-3-4-5-6. It’s maddening. But after a while, it ceases to be equations. The equations become patterns, and patterns become reflex responses. The next thing you know, I’m not thinking about anything at all. I don’t have to pay attention. I’m sitting there looking at the arcade game Big Buck Hunter in the corner.

Attwood: The chant in the song is taken from a really old Japanese poem. It means, “What do I care about silver and gold?” It’s really about the insanity of counting.

B: Once I’m running through the numbers, they lose all numerical meaning. They become senseless. My reptilian brain turns on and is going “dut-dut-dut-dut-dut-dut-dut-dut.” It’s very emotional, but I can’t describe the emotion. It becomes a spiritual experience of repetition. The numbers become every moment—every drum hit.

It’s like the way we think of time, and look at the clock and count the movement of the second hand. But time really isn’t like that at all. It’s just a constant movement.

“There is a freedom you feel when you dress up as something else. It’s not about becoming that thing.”

B: Buddhism is like that too. When I’m doing the mantras, I know I have to say a line 108 times, but if I didn’t have these beads around my neck [makes a gesture like she is counting her prayer beads, which are shaped like tiny skulls], I’d have no idea how many times I did it. That’s also how pop music works when you let yourself go. The “Counting Track” fucks you every time you try to lock in on it. 15 and 9 and 12 and 7 are all mashed together and multiplying each other. They are spiritual numbers. It uses Chinese numerology. Nothing lines up. I write drumbeats where even I don’t know how long the song will be. That’s hard to predict when you just have numbers telling you what to play. Humans can’t keep on top of numbers.

Attwood: I’ve definitely experienced a certain level of what people would call silence on stage. It’s like when you lose yourself while driving, and you don’t really know how you got home, but you are vaguely aware of it. Sometimes I get to the end of the song and I have no idea what happened.

How do you know when to stop?

Attwood: Our older performances never had a set length. We didn’t have songs. We’d get in trouble too. We would always end up playing over or under our time slot. We’d go until the end of the tape, or until something broke. Then, we were done.