The joke is simple. What if all the characters of the iconic JRPG Final Fantasy VII were high all the time? “FFVII made sense, because the like, ecological theme, and the many, many ‘…’s,” explained the creator of the Twitter parody account @ffvii_blazed. “It already had this invitation to this brand of humor. So I went for it. It worked more and more as I kind of invented alternate personalities for each character.”

Through character dialogue, the account walked readers through a distorted version of Final Fantasy VII’s plot, 140 keystrokes at a time. By the time the story concluded in mid-November (with the hyper-intelligent quadruped Red XIII saying, simply, “Woof”), the account had garnered over 3,000 followers. Its creator only consented to speak to me via online chat, revealing neither name nor gender, and asking to be referred to simply as the Author of FFVII Blazed. No contact information or external links are proffered on Twitter, either. “There is this quote,” s/he told me. “I don’t know the source or if I have it right, but it’s something like this: ‘Bathroom graffiti is the highest form of art because it is not done for notoriety or financial gain.’”

Its creator only consented to speak to me via online chat, revealing neither name nor gender.

The extent to which the stoner-comedy genre fits the game’s plot is remarkable, considering that Final Fantasy VII stands as a tentpole in videogame history of how “serious” and “emotional” the medium can be. Throughout FFVII Blazed, the heroes repeatedly find themselves confused: What is this lifestream thing? What’s the difference between Holy and Meteor? Why are we going to Nibelheim again? I put my metaphorical cards on the G-chat table: Despite its reputation and immutable place in gaming history, I said to the Author, the plot of FFVII is bonkers. “I love the plot of FFVII,” the Author replied. “I think it’s brilliant, and I want to be clear that this is an act of love.”

In the interest of being similarly transparent, let it be known that I am not a Final Fantasy VII superfan—far from it. I find the game inscrutable, a discomfiting combination of epic fate-of-the-world adventuring and lengthy downtime involving hanging out at a casino or a breeding weird bird-things on a farm. The game seems to delight in its transitions from the profoundly, even cartoonishly dramatic to the completely mundane. The best example of this comes in an early sequence when the main heroic trio of Cloud, Barrett, and Tifa are attempting to infiltrate the evil Shinra Corporation’s headquarters. This is high-stakes espionage action, and most players, thinking they are being clever, opt to take the stealth route through the back rather than charge in the front door. Their reward? An absurdly long staircase climb in which absolutely nothing happens. It is a sequence as subversive as it is maddening.

“[That] was one of the first times I just mixed in a literal quote from the game, and if you didn’t remember the quote, you would have no idea it wasn’t made up like the rest of the stuff,” recalled the Author. This was my favorite sequence of the parody account, as it captured the player’s own disbelief that the game is making them run through screen after screen of nothingness. “I had my doubts that it was really funny to go on and on and on with that gag… [but] weed messes with your perception of time, so it’s funny to do 100 tweets about a staircase. But also, they really were on that staircase forever.”

I am not a stoner, and I have a lot of problems with Final Fantasy VII, but I was hooked on FFVII Blazed. At first, I followed the account like any other and read the story piecemeal as it came into my feed. After a while, I deliberately stopped following so that, every several days, I could check on it and be treated to a long string of tweets to be read in succession, like the next chapter in a novel. 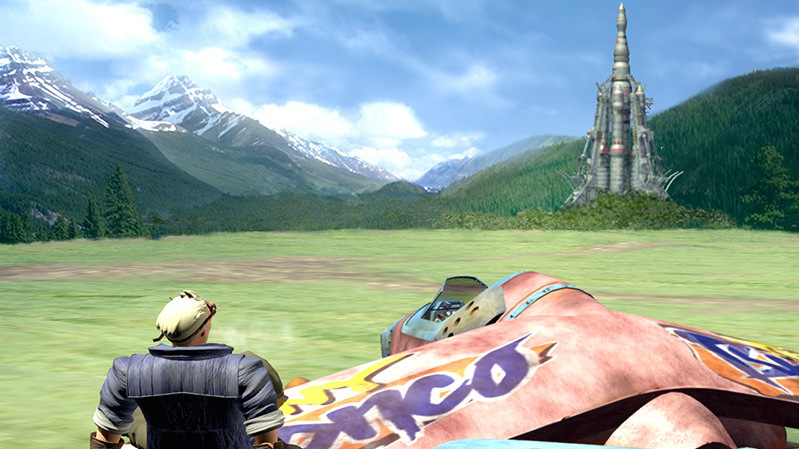 For awhile I wondered why I was responding so strongly to a parody of a game I don’t particularly like, but then, a game like Final Fantasy VII is bigger than my subjective preference. It has attained a cultural significance and entered gaming collective consciousness. French psychoanalyst Pierre Bayard has suggested that art exists more in our memories and shared experiences than on page or screen. He goes so far as to argue that you need not have read a given book to have a valid opinion on it, or for it to mean something to you. I have never made it all the way through Moby Dick, for instance, but that doesn’t stop me from using the phrase “white whale” at an appropriate point in conversation. And I know the appropriate point because I know, to some significant degree, the essence of the book; we all do.

In many circles, asking if you like or even have played Final Fantasy VII is akin to asking if you like Hamlet, or Casablanca. From a perspective like Bayard’s, these works transcend personal opinion—even if you’ve never read or seen Hamlet, you know something about it, it means something to you, its influence has reached out and affected other things you know and care about (whether you’re consciously aware of it or not). Even the Author did not play through Final Fantasy VII again as s/he tweeted, instead relying on online dialogue transcripts and personal recollections of the game. Final Fantasy VII is not “just” a game, then, but part of our shared vocabulary. It is a reference point for emotional NPC deaths, for breaking the mold of size and scope, for the enduring power of franchises in videogames. Reading FFVII Blazed was like attending a family reunion; I may not have liked everyone there, but we were bound together by something greater than any individual component. The Author’s desire for anonymity and the parody account’s popularity are both emblematic of this: FFVII belongs to all of us.

FFVII belongs to all of us.

“I think FFVII will last forever,” the Author asserted toward the end of our chat. I pointed out that, ironically, much of what made the game a blockbuster—state-of-the-art graphics and cutscenes, an unprecedented three game discs—were technical achievements that are now irrelevant. But the Author did not think any of that matters, and I am inclined to agree. “No one looks at classic paintings and says, ‘Yeah, but paint technology still had to come a long way.’ … I think 1990s Japanese Console RPGs will still be like that in 50 years. It’ll become increasingly esoteric, but still there.”