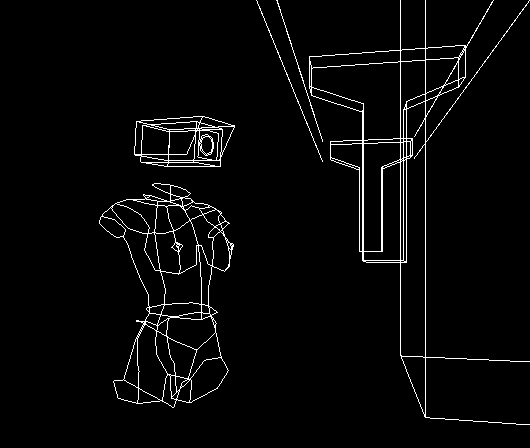 “im back in amid torsos

now in the graveyard

oh wow this woman and this skull

That’s an excerpt from a chat log. It’s what I was able to type while flitting between the two tabs open in my web browser. On one side was this chat log of rushed exclamation, while the other housed a screen in black with a small window at its center, which let me peer into the wireframe void world of im null.

you’re nothing more than a number, no longer a person.

The person I’m so eager to convey both my ongoing journey and the surprises it brings me is the game’s creator, Zak Ayles. He’s many things: a visual artist, a digital storyteller, an internet mystery, a videogame creator. His projects commonly feature people so disillusioned with the society around them that they desperately seek out a way to escape it. In PUNKSNOTDEAD, unprovoked street violence acts as a conduit for this. Be Not Afraid had us accept death by smashing headfirst into traffic—better that than the dystopian cyberpunk of 2077. Upcoming “not-game” Catering to Birds follows a desk worker who is so convinced he’s a bird that he jumps off a building, and flies away.

Zak, too, needed to escape some months ago. His own departure involved leaving the internet for a while. But that only left him with himself. And an artist must create. So to cope with his darkening mind he teamed up with coder Devin Horsman and sound designer Robin Arnott. Together, they transposed Zak’s deepening isolation into im null. It’s a game about experiencing alienation.

This is obvious from the start. You’re asked to “DEFINE YOURSELF,” to give yourself a name, but only using integers. Already, you’re nothing more than a number, no longer a person. You’re then dropped into the surrounding blackness.

Im null realizes its manifestation of alienation in different ways. First is the sense of feeling lost in its world. This starts with the overbearing darkness and continues as you explore. Zak called it a “virtual horror art gallery,” which is accurate, as you’ll only find morbid installations accompanied by terrifying soundscapes (made up of “found sounds, voice samples, water harp, and other instruments”). It’s all headless torsos, endless highways, eerie graveyards, women crying into cellphones at the person who just wrecked their life. It’s difficult to make sense of any it, both individually and as a whole, and that seems to be the point; to feel uncomfortable and unsure.

NULL has many forms and is known to attack.

This extends to the game’s use of passive multiplayer. As you wander the nothingness, you’ll see vertical lines moving about in the distance. Upon closer inspection a number is revealed above them. These featureless lines are other players, and to them, you’re just another unidentifiable line.

It’s a strange experience, first meeting another player in im null, as their lack of personality moves them firmly into the uncanny—is this another human, or something else? What I wrote in the chat log after my first encounter sums it up well: “i felt like i was looking at a robot, and that i was a robot, and we both were too caught up in our own thing to bother with anything more than a momentary glance.” Zak’s use of passive multiplayer in im null succeeds not in bringing us closer together, as is usually its purpose, but in pushing us further apart.

And then there’s “NULL”. NULL is, well, I don’t know what NULL is. NULL has many forms and is known to attack. You’ll know when this happens as the in-game activity log will tell you people have been banned.

NULL first appeared to me as a wireframe head with the word “NULL” above it. It moved unnaturally; violently shuddering into spaces at random. When I saw NULL the second time it seemed to look right at me before turning into a shopping cart. That’s when it began to mimic my movements without delay. I’d go left, it would go left. I’d go right, it would go right. I didn’t like that. Not long after, the game froze while I was walking through a forest. I described it in the chat log:

i think im in limbo”

Zak invites the idea of im null being a form of performance art.

The line that Zak has been using to describe im null is “There is a ghost in the machine.” Null, that thing, is this ghost. Apparently, it only messes with you if you’re in the game for long enough. Not long after Zak released im null, the “Paranormal” board on 4chan discovered the game and its ghost, and they’ve been trying to work it out since. This has involved drawing maps of the game’s world, analyzing Zak’s Twitter account, and picking apart the symbolism of each wireframe installation.

But figuring out whether NULL is an AI, a human, or a soul trapped in a machine had them the hungriest for an answer. At some point, they all seemed to agree that someone, probably Zak, is controlling NULL. It didn’t take long after this for one of them to send an email to Zak’s address. They got a reply with some coordinates, and nothing else. The board then worked out that these coordinates marked out the Austin State Hospital Cemetery, so one of them—an Austin local—trespassed on to these private grounds to take pictures of tombstones.

It’s in showing me this that Zak invites the idea of im null being a form of performance art. Earlier, he had told me that NULL was not controlled by an AI. That leaves only two options. Either, NULL is an actual ghost, or it’s controlled by a human. Whether that would be Zak or not, I can’t say. But it wouldn’t surprise me: performing as NULL allows its human host to become the enforcer of alienation. NULL attacks by banning people, enacting digital exile, and it does this without reason so as to leave its victim estranged. It’s also able to shapeshift, choosing to blend in among the game’s population of lines if it wishes, or it can mimic and haunt them from the outside.

Maybe NULL is Zak’s surrogate method of toying with or taking revenge against society. His previous games certainly reveal an aching detachment and a lust for rebellion. It almost seems obvious when you look at it this way. The game is, after all, called im null. Perhaps the title was a confession all along, both of Zak’s status in the game, and his feelings of disillusionment outside of it.

You can play im null in your browser on Zak’s website and on Game Jolt.