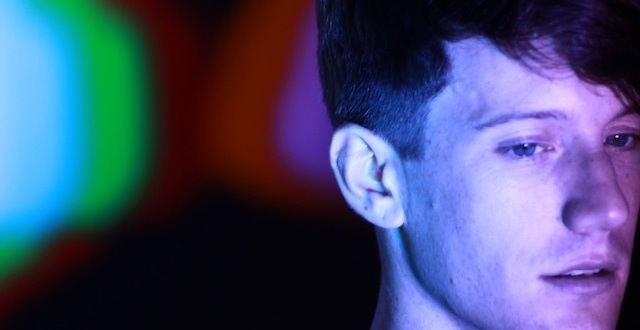 Hive Mind by Daniel Martin-McCormick, aka producer Ital, is one of the best albums of the nascent year. It’s ostensibly a house record, but it’s presented by a guy who’s put years into the hardcore and noise scenes. Though the album is largely wordless, it deals with the abject weirdness of the modern world in a fairly explicit manner—the soundscape “Privacy Settings,” for example, samples wolves howling. Though he produces tracks on a computer, Ital is not a guy who’s exactly taken with technology. Also, he revealed about halfway through our conversation that he does not like videogames. For a website about videogames, art, and culture, this created some interesting tension.

One of the more interesting things to me about the correlation between dance music and videogames is the idea of pushing buttons.

Yeah. Totally. I think that there is something really gratifying about that tactile element, no different from playing a live instrument. It’s kind of hard to qualify, though. It just feels like different from connecting with something electric, or making a nasty drummer face while you’re tearing up the fuckin’ residence … even though it’s the least tactile way of playing music, it can be like conducting too; you have all these things going and you’re like the master of them all. They’re going independent of you. But you’ve got that sense of, like, power. Doing something bigger than yourself, almost. It’s kind of like a first-person shooter.

Well, you have a system, and unlimited power within a rule set.

Yeah, exactly. I mean, I remember from playing videogames as a kid, they’d be maddeningly limited, but that becomes an aspect of the game.

You could even tie that into the idea of playing on older, more analog equipment.

I mean, yeah, there’s always a point at which you sacrifice one thing for another. If you use a computer, you sacrifice feel for that kind of larger scale.

You operate equally in the worlds of more traditional instruments and sort of electronic stuff. How do you see the difference between those two?

The difference is really process-based. The way I make tracks is through this hyper-edited process through this program called Audacity, and it’s more about sound sculpture than playing them; but I think that a lot of the same overarching [musical] concepts, of dealing with sound and sound immersion and wanting to have like a rainforest quality to the overall sound, do play out. You just tweak the process, and you get these very different results. The overall feeling to me is essentially making music, and the music is overall different but kind of the same.

You were first in Black Eyes, right?

That was really the first band that took off and did stuff for real.

Had you always been making dance tracks on the side?

In high school I made tracks on a four-track and an eight-track. It was attempting to be dance music, although I didn’t really know what dance music was. I wasn’t like a rave kid or anything like that. It was more coming from a DJ Shadow, Aphex Twin type of perspective, and around like 2006 I started making tracks in an Ital way. So I took a little break.

What did you think of Choose Your Own Adventure books?

I always thought they were kind of cool, a bit of a novelty. I briefly got into more advanced role-playing books. Like more complex systems than having two pages you could turn to. You know, I don’t really read them anymore. Magic: The Gathering was the shit, though. I used to play the Star Wars X-Wing game. I remember I couldn’t figure out how to connect to other players. It was a mind-blowing idea. That was probably the last game I played.

“I would not want to be playing a videogame in any context.”

You don’t play at all?

Sorry, that’s not that weird.

No, I think it is weird! Even Alec Baldwin had that incident with Words With Friends. I kind of swore off videogames because I was like, “I find this kind of repulsive.”

The thought of a grown man playing videogames to me seems unfathomable. I would not want to be playing a videogame in any context. It seemed so incongruous with the type of life I wanted to lead when I was younger. And it sounds really snobby and I don’t begrudge people who play videogames now, but to me it seems like, something to put over with heroin and like, Hummer driving.

There is nothing wrong with that viewpoint.

It sounds a little harsh when I say it out loud. Putting it into the world and out to another human being, you know?

I mean, it’s a pretty prevalent attitude among people. Why do you think that is?

Well, I guess because it always seems like “kids’ stuff,” and I hate the way people talk during them. [Makes a bunch of random onomatopoeic noises] I understand, and I would probably do the same thing if I were playing, but I guess games just had this really bad rap when I was coming up. And I don’t like the idea of “immersion,” being like, “Oh, I spent all weekend playing this game.” I can’t imagine anything more horrible than spending a weekend looking at a screen. I spend time on the internet for sure, and I love to go to the movies, but I don’t want to go to the movies all day. I can’t handle that for, like, more than an hour.

With your work under the Ital moniker, are you trying to make a grand statement?

At times, yeah. With this album, it definitely took on themes of what we’re talking about. Feeling ill at ease with the state of the planet and technology, and if not ill at ease just really ambiguous about how the world is creeping on you. Maybe the inescapability of the world that we live in-that you can’t really get out of it. But at other times, I just make tracks. And I think that maybe what unifies all that shit is the tracks are almost inevitably about the joyful physicality of life-dancing, etc. And that maybe currently with the album there’s the point where the creeping dread and bursting joy meet. And that’s a little bit in retrospect, too. When I was making it it was all about making tracks.

When you compose, do you feel you’re working with or against technology?

Both. Audacity is so shitty and limited that I prefer it. I read an interview with [producer] Zomby, and they asked him if he played videogames, actually. And he said, “I don’t, because I don’t want to be part of anyone’s system. I want to make my own system.” And when I started using Audacity, what really appealed to me about it was that it was so not designed for music making. You had to construct your own methodology and way of working with that. I don’t make tracks in Logic because inevitably the design makes some decisions for you. I like having something I have to push against, instead of something that shapes the way I work. I need something that’s hands-off and amusical. I want to define the musical space inside of it.

Dance music can offer the same tension and release that a lot of games do.

Yeah. Also, I’m not at all a believer in the idea that videogames create violence. To me, it seems like one obvious point of comparison is the vastness of human experience has created violence in us all. Everyone is experiencing at times anger and rage and all of these things. You need to be interacting with them, and I think music in general allows you to dive headfirst into the whole of human experience. And having a videogame could be a way to touch on or even express yourself in situations you can’t really [experience] day-to-day.

I see parallels between what you do and what Skrillex does. He used to be in a scream band, you used to be in a hardcore band, and now you guys are both in dance music. Different arenas—

Do you see a connection between the punk scene and the dance scene in any meaningful way?

I think the thing about punk and hardcore and also noise—they all are very accessible, free spaces. When you’re young, you’ve got a shit-load of energy, and you’ve gotta put it somewhere. And they’re great for that-super energetic, aggressive music, and also very accessible. You can go to the shows, start a band, whatever. You don’t need chops. There’s no such thing as a “punk apprenticeship.” You just start. I think that it gives people a start, it gives them confidence, and I think it gives them a lot of room to be really messy.

I think a lot of noise people, when they expand out of noise, are really holding on to texture and this overarching sonic character. I don’t know how many noise people are doing straight Fleetwood Mac vibes after their harsh noise project, but even if they appropriate aspects of that… And I see Skrillex, and his music has all that super-fucking bullshitty bombast and self-aggrandizing, like, teen crap. But whatever, I don’t even begrudge him. That’s the link to scream. And I feel like the raw, “fuck it” thing of punk is something I really hold on to.