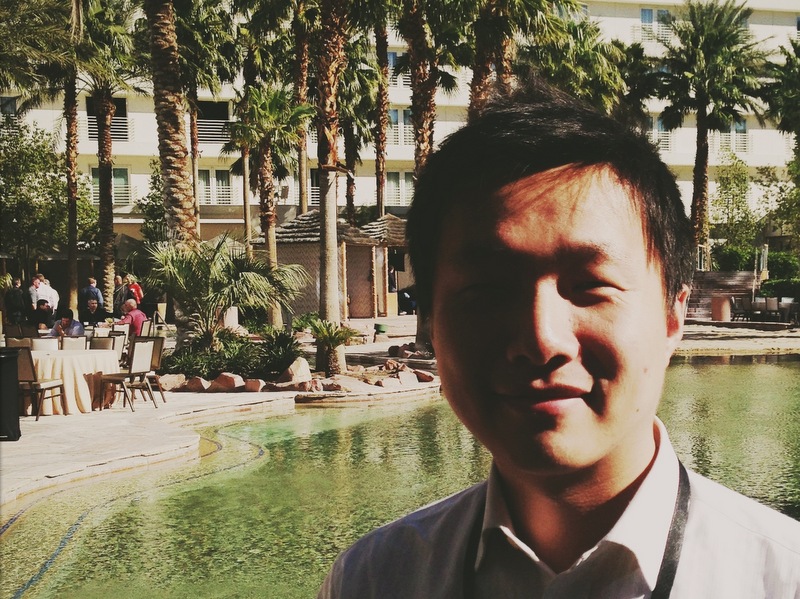 The first thing I remember about Jenova Chen when I first interviewed him years ago is his patience. His speaks with calculating speed as if he’s trying to filter and frame what he’s about to say. To some, this might be a non-native speaker parsing his own sentiments before talking, but to see Jenova’s work — Flow, Flower, and Journey — is to understand that he’s playing a long game in word and deed.
And so it was perhaps unsurprising that Journey took top billing at last Thursday’s Academy of Interactive Arts and Sciences award. The slow-paced, cinematic darling of 2012 had found a unique place in the videogame world’s output. Silent as Chaplin film but as lush and epic as a John Ford western, Chen and his team’s retelling of Joseph Campbell’s seminal mythology treatise The Hero With A Thousand Faces was unlike anything that had been released.

This is all part of the plan, of course. Chen, now freed from his three-game contract with Sony, has plotted a new and dangerous course. With more than $5 million in back from Benchmark Capital, the same wallets that funded Instagram and eBay, thatgamecompany has transitioned from indie darling to something much more ambitious. After a three week vacation in his homeland of China, he returned inspired with a new and novel vision.

For the first time, I’ve hear Chen talk about what he dreams Thatgamecompany will ultimately become and how companies like Pixar light the way for a bright future of games without words, but with international appeal and complex emotional palettes.

Kill Screen: What is that like going off on your own?

Jenova Chen: I’m finally doing entrepreneurship. We were still under the wing of the giant mother Sony and now we’re by ourselves. It does bring a lot of risks and extra pressure that the game has to be good. Otherwise we’re done. The company’s gone.

When we dealt with Sony, because we knew that we had three games, even if the game sucked, we’ll still had another one. When you work with a giant publisher, you can control what’s in the box, but not what’s outside. You can’t control how it’s marketed, only what’s inside of the game.

“When you work with a giant publisher, you can control what’s in the box, but not what’s outside.”

Do you think it’ll make you more conservative since you have all the risk? How do you experiment in an open environment without a safety net?

Depends on what kind of business you’re running. We raised venture capital and they want to see the money you invest to doing a great thing. If they didn’t believe you had potentital, they wouldn’t invest. Usually the things with so much potential are risky.

In film there’s Tarantino, who ostensibly makes commercially successful films, but at a smaller scale. Is there someone in other industries that you liken yourself to?

Could you tell if our game has a genre what that genre that would be?

Do you even think about your games that way?

Well, I’m curious about your opinion. I have my own opinion, but it’s my opinion. It’s not of someone who plays games. My relationship to them is different.

Genre’s a funny question. One of the biggest problems that indies have is that they identify their competition as other indies. If you make an RPG as an indie,  your competition is Skyrim, because you’re disposition is the same.

For me, the competition because of the length and the visuals, for you, is going to see the museum or seeing Meek’s Cutoff. Something where I’m going to be visually stimulated but I know it’ll be 2-3 hours.

So we’re competing with movies. But what movie genre though?

Maybe some documentary. There’s a film about the Georgian Caucusus that came out at Sundance this year. There’s a pacing thing too with the games. I can walk away from them which is unusual, because games are always trying to call you back. You guys seem comfortable letting people dip their toe. When we compare games, we often compare them to games. Maybe we should start comparing them to other media.

A Sony designer told me that my games are like Terrence Malick’s film. I’ve only seen Tree of Life. But I guess he’s not mainstream, right?

I think of my games as something that’ll communicate a strong emotion to make people’s lives better. It’s not quite set into a particular tone just yet since there’s so much open space. But each of my games is pointing it to here or back there. We want games to help people rather than take advantage of people.

I think the next game we’re working is kinda like Journey. It’s kinda heavy and you have to be in the right mood to take.

I think the next game we’re working is kinda like Journey. It’s kinda heavy and you have to be in the right mood to take it in.

Usually mainstream has a negative connotation.

What is it about Pixar?

Is that where you see yourself?

I do like their ethos which is to deliver high-quality experiences to people of all ages. I want to do that as well. My approach is different. For example, there’s no talking in my games.

Is that strategic on your end?

I’m not American. I grew up in Asia and China is my home.  I always want to make sure that my games can be played here and in my home. Because of that, language is a barrier. You can say “Why not translate?” Well I guess, I’m a bad English language writer. I don’t write good dialogue. That’s my limit.

Strategically, China is a very large consumer segment. Youth culture will only grow over the coming decades. That seems like that’s a great moment for you.

That was true for me particularly after Journey. I often tell poeple that I feel like the language we use is a façade. I went to a conference where there was a native Indian professor talking about how their language is in danger of being lost. For example, there’s no word called “resources” in Hindi. There’s only brother and sister. To them  — fire, water —  are all borrowed. They live with bisons, but they don’t call it a “resource” or say “I have this many bison.”

When I was trying to connect with another English speaker online or in chat, it was really frustrating. A lot of times I don’t need to talk and there was a sense of grievance. You can see it in Journey. It’s particularly difficult for people in different cultures. Even with English, I can’t completely connect with a native speaker. I’m interested in connecting people though.

As an English speaker, I like how specific it is. If we don’t have a word, we’ll steal. But America is a very young country and we don’t have that sense of identity. It makes things very flat.

That makes my life easier. Most people just speak easy English. I like how simple life is here.

“But the other music genres like country or romantic music about love, where is the equivalent of that in games? I don’t see anything.”

So instead of genres, should we think about games as different types of languages?

We focus on feeling. If you look at entertainment in general, there’s big categories. With music or movies, there’s the equivlaent in action genre in games. The young boys watching superhero comic or listening rock or hip hop, they play Assassin’s Creed. But the other music genres like country or romantic music about love, where is the equivalent of that in games? I don’t see anything.

So you’re filling the gap?

I don’t make relaxing games because I’m a relaxing guy. I’m a competitive guy. I like strategy games and fighting games. Anything that involves winning and losing. So in a way, when we make games, I’m making them because I think it will win in terms of contributing values.

For Journey, I analyzed all the online games and how those games make people feel. Is there an overpopulation of one feeling or an emotion that’s missing? That’s why I designed Flower, because most games are so stressful.

Most people feel so bad towards each other online. They just don’t trust online people. What if we can make a game that makes you trust each other? That’s the feeling online gamers miss the most. By delivering that, first you’re going to like it. After all, if you eat so much meat, veggies taste great.

There’s a huge market that doesn’t play because online games are about a feeling you don’t need, so if you provide the opposite, that’s likely to open a new market. It’s been proven that most people who play Journey are female, but the PlayStation 3 is like 97% male ownership. Why are their so many women who play? It’sbecause their boyfriend says “Why don’t you play this game? We think there’s a big lack of these positive emotions online.

This is the first time we’ve talked about pragmatics. How do you institutionalize…

Well Pixar has a culture.

I did extensive research on Disney’s corporate history and in a way I see a big vacuum in the market. You see all these grownup gamers, but they don’t have lots of time. They do have kids. They have kids games, but I hear often how difficult it is to get a game that’s truly good for kids.

But that’s not my point. Even when the parents got the game, the kid is getting the game but playing by himself. People are always complaining that these devices, these game consoles, they’re disconnecting us. They’re making us further from each other. Can you image if there was no Disneyland? Only carnivals where young kids have to ride and parents wait there. They watch and stand in the sun. That’s why Disney made Disneyland.

There’s a vacuum that’s great for kids, but also still emotionally satisfying for parents to get into, so they can share the experience. The games are still violent games where the kids can’t play or super naive stuff that’s just for kids. There’s nothing in between.

I just watched Madagascar 3 with my girlfriend. I don’t have kids, but it’s a great film. I get the sense that there’s more “kids” stuff like Yo Gabba Gabba that has parents in mind. But you’re not designing kids’ games.

My games are designed for human beings. It needs to be simple and intuitive so a kid can maybe be better than their parents. On the other end, it needs to be relevant and reflect some kind of humanity. Adults should be able to find it interesting and talk about it. Journey is kind of like that — parents were writing us about it that this was the first time that they could  talk to their kids about something that’s actually serious.

Our advantage is that we want to create positive things for people, unlike most people that make games. By sticking to that, we will have commercial success.