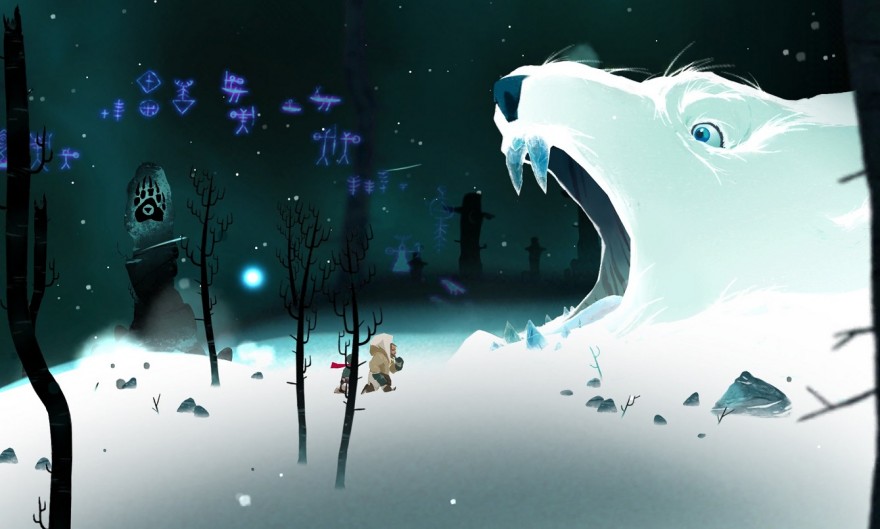 Inuit culture has been misrepresented by the lenses of outsiders for years. Those who sought to document it showed insensitivity towards Inuit practices and values, instead favoring artistic vision, or resorting to stigmas and stereotypes for the sake of appealing to a mass audience. Hegemony always got in the way of truthful portrayal.

Recent efforts have been more diligent by letting the Inuit voice reclaim sovereignty. Atanarjuat: The Fast Runner was the first feature film to be written, directed, and acted entirely by Inuit people back in 2001. It was remarkably successful in every way measured, and it has since set a precedent for media that aims to document and adapt Inuit culture.

the culture takes a backseat to the rigid familiarity of puzzle platforming.

This is the scene that Glowforth’s puzzle platformer Last Inua enters. It’s infused with Inuit mythology, featuring an Inuit father and son fleeing the great demon Tonrar. Ataataq—the father—punches and shoves large blocks of ice out of the way, and uses picks to climb frozen walls. Hiko—the son and “chosen one”—channels an inua, which is the spirit that, according to Inuit culture, exists in all living things. With the inua, the child is able to create bridges across the air, and telefly to escape yetis and Tonrar’s minion spirits that would otherwise kill him.

Yet, Last Inua is created by a team of Dutch and Estonian artists and programmers. Problem? Not necessarily, and it seems that Glowforth has done plenty of research into Inuit mythology. But I can’t help but wonder what Inuit people would make of this adaptation of their beliefs.

To my knowledge, this is the first time a videogame has been based entirely on Inuit mythlore. That’s why it’s a shame the culture takes a backseat to the rigid familiarity of puzzle platforming.

The spirits, gods, and demons of Inuit mythlore are always present. Tonrar’s image flashes in the background with every strike of lightning in the dark sky. The illustrated realizations of the keepers of the sky, grounds, and water are magnificent; one area is set inside one of them, where walls are flesh and the hazards are crushing teeth. You even learn to appreciate the warmth of fire due to a few occasions where freezing to death is a possibility (although strangely inconsistent with the rest of the game).

Despite all of this, you only get a faint sense of the culture that purveys the game. As the level design reiterates the same ideas, albeit with added convolution, it becomes wearisome. It doesn’t help that the snowy environments repeat a lot. Of course, there’s a lot of snow and ice in the frozen North, but we should be seeing the environment through Inuit eyes. Instead, you look through your own and see just another distancing puzzle piece.

While Last Inua is seemingly not offensive or misrepresentative (hopefully) of Inuit culture, forcing it through the lens of a puzzle platformer doesn’t allow it to flourish, not even when it’s needed.

Last Inua is available on the iOS App Store, and will soon be coming to PC and Mac.