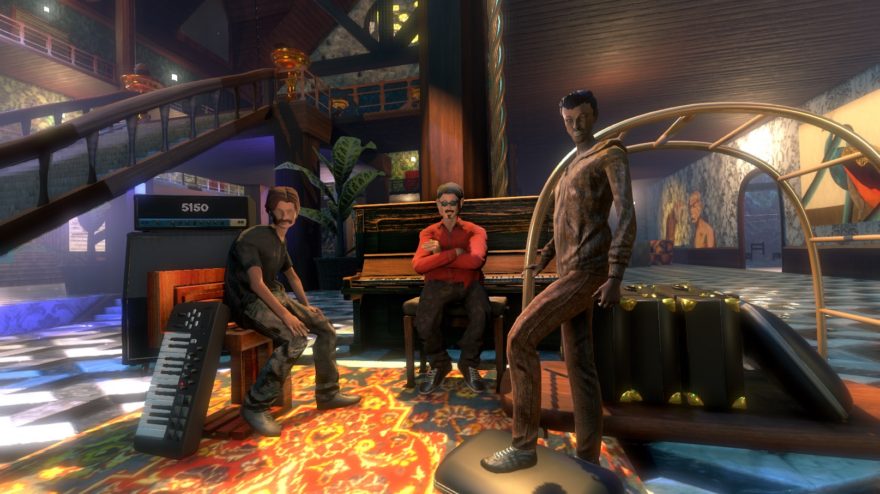 Greg Heffernan (aka Cosmo D) is making videogames unlike anyone else right now. He attributes it to two things: his early efforts to visualize music, and his background among the New York music scene.

The first game he made, Saturn V (2014), turned the track of the same name by Heffernan’s band Archie Pelago into a virtual space. It was meant as a creative experiment: Heffernan said that he always thought of the music he created as a window into his head. By turning “Saturn V” into a 3D space he calcified that idea. Players could wander around a “vertical mix” of that song where their location changed the overall levels of the song’s instruments. Meanwhile, a bunch of odd, seemingly disparate objects could be viewed—a billiards, table, a pot of Pringles, barrels of beer—scattered around the place without much rhyme or reason.

“I attempt to give a nod to that freedom of play”

But not quite. Heffernan’s thought process while constructing the 3D space for Saturn V was guided by “incidental details, references, nods to people and places in my life,” he told me. “Any creative questions that came up, I’d try to answer from personal experience. Any gameplay questions, I’d try to answer from a lifetime of playing a wide variety of games, particularly non-linear immersive sim games where players have freedom to explore.”

In particular, Heffernan looked back to the games released in the ’90s by Looking Glass Studios, who were most famous for the System Shock and Thief series. It was the fact that they were prided on emergent play in open spaces that appealed to Heffernan, which is something that he sought out when composing music—the association between videogames and music was set. “By day I was seeking musical experiences where I could be as creative and free with my cello as possible, then I’d get home and fire up a game like S.T.A.L.K.E.R. or Vampire: Bloodlines,” Heffernan told me. “In my own games I attempt to give a nod to that freedom of play.”

But this approach to designing game spaces is actually better understood as being rooted in the New York music scene in which Heffernan is embedded. He studied classical cello at college while also taking jazz cello lessons with Erik Friedlander, who Heffernan describes as “a singular jazz cellist held in high esteem by the musical establishment in New York and beyond.” But it’s Friedlander’s connection to John Zorn that has informed Heffernan’s videogame work the most.


Zorn has been a big part of the New York underground jazz community since the 1970s and has his own “roving crew of self-described ‘Downtown’ jazz misfits” according to Heffernan. Zorn’s early free jazz pieces made a direct connection to games through their titles. “Hockey,” “Lacrosse,” and “Cobra” are all pieces of music that “also function as improvisational power struggles between the performers,” Heffernan told me.

“these pieces crackle with uncertainty and surprise”

These pieces are game-like in that they evoke the idea of competition and communication between the instruments, each of them a part of a sonic system, an idea that Zorn has said was inspired by old Avalon Hill boardgames. “There are a strict set of rules for those musicians to follow, guided by the whims of a conductor holding up placards to indicate the direction of where the music could go,” Heffernan said. “Played by sensitive, skilled players (Zorn is good at assembling those), these pieces crackle with uncertainty and surprise.”

Having this music history in his proximity during his student years, and later the DJ world with its playful remixing, inadvertently affected Heffernan’s approach to game design. In both his musical explorations and videogame spaces he puts trust in improvisation, whether from himself or from players. This manifests in his games as non-linearity and the reactivity of the virtual world, which acts as a reward for the player’s curiosity or mischief.

With his second game, Off-Peak (2015), Heffernan moved beyond a mere “sonic clubhouse” and wanted to create a space with a wider canvas—one with a narrative, characters, more than one song, and that was rooted in reality. “I needed subject matter, so I drew upon my own life, my own experience, and tried to be honest with my approach,” Heffernan said. “Music that sticks with me is satisfying and unsettling at at the same time, and Off-Peak was me attempting to ride that balance in my own way, trusting, hoping, that some players would resonate with it.”

Off-Peak will certainly be a challenge for players used to engaging with traditional videogame formats. It has you stuck in a surreal train station trying to gather up the scraps of a ticket for a ride out of there. But keeping in tune with Heffernan’s approach to games, it doesn’t offer you direct guidance, nor does it try to explain its eclectic contents, ranging from avant-garde musicians to steel girders. But for the patient and analytical eye there’s a lot to unpick here; a process that should help tame the nonsense. “Zorn mixed music genres with abandon, but he always grounded his flights of fancy with strong themes and concepts,” Heffernan said. “I aspire for my games to not just be a hodge-podge of ideas, but have an actual thematic grounding, and come from an honest perspective.”


Heffernan’s next game, The Norwood Suite, is him applying those same techniques to an even wider canvas. This time the open-ended location up for exploration is a hotel with lot of nooks, crannies, and hidden pathways. As with Off-Peak, there is a throughline players can follow if they wish to reach an end—the dichotomy of freedom and structure draws from what Heffernan considers to be a good DJ set or jazz performance, “where there’s this wide room to maneuver inside of an intentional arc, however subtle.”

“the gameplay provides a sort of music generation machine”

While there is a lot of “creative riffing” in The Norwood Suite, Heffernan told me that it’s grounded in relatable detail, inspired by the musicians he respects the most who allow their life experience to influence their work no matter how theatrical it gets. “Characters in the game all have believable motivations for being at the hotel,” he said. “Their conversations, with each other and with you, are meant to feel natural. Their reactions to your actions are meant to feel relatable.”

The sound design and its integration with the choreography of the 3D space is an area that Heffernan has being paying particular attention to. He told me that text appears on-screen to correspond with fragments of musical instruments played by character seen in the immediate environment so that it seems diegetic. These small sounds that are fed into the game world by the player’s actions then blend with the in-game music that is blasted around the hotel through visible speakers. “Without realizing it, the gameplay provides a sort of music generation machine,” Heffernan said.

By now, Heffernan has settled into the way he makes games firmly, and lets himself be guided by the joy of discovery, exploring ideas that resonate while he tinkers. It’s fueled him with the kind of confidence and whimsy you’d expect to see from a free jazz musician on stage, but here it’s applied to videogames: “In working on The Norwood Suite, and the games before this, whenever I’ve found myself in this headspace, I’ve felt like ‘yeah, I’m on the right track, here’.”

The Norwood Suite is coming out for Windows and Mac in spring 2017. Check the Cosmo D website for updates.