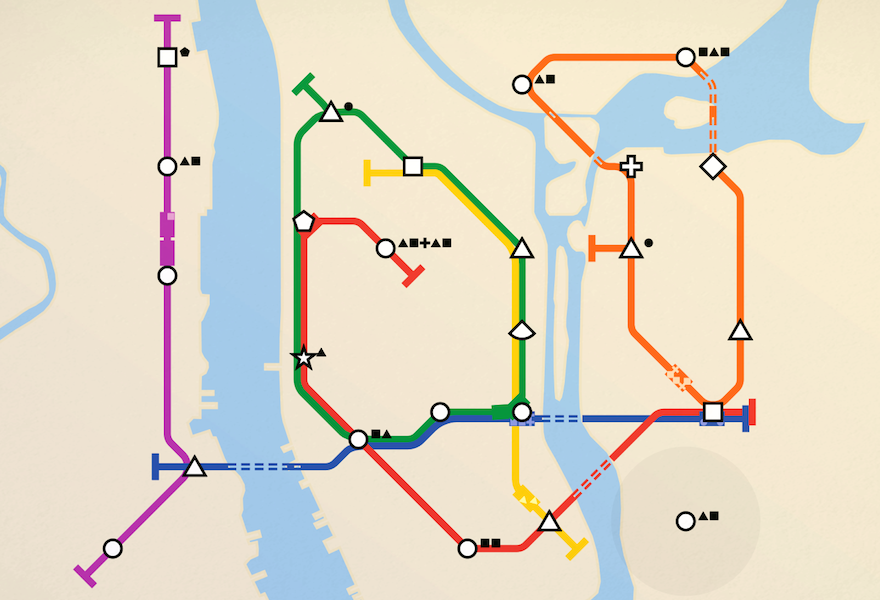 I don’t remember much from Jeen-Shang Lin’s Soil Mechanics class. Beyond a vague inkling of his whiteboard doodles and that time he paused mid-lecture to remark on my unexpected presence, most of it remains a formula-laden blur. Except for the one time he mentioned Pittsburgh’s North Shore Connector project. I can still recall his perplexed laugh. “Pittsburgh has some beautiful bridges,” or something like that, he said. “The people know how to build them, how to fix them … so why the hell did they decide to dig a tunnel underneath the Alleghany?” A shrug. More laughter. Then back to talking about datums and pore water pressure.

Mini Metro doesn’t ask you to decide between digging tunnels and building bridges. There are no budgets to balance or construction contracts to negotiate. Pittsburgh’s late 2000s light rail extension connecting the North Shore to downtown ballooned from an original price tag of $200 million to over $500 by the time it was completed. Various politicians fingered it as a prime example of gratuitous pork barrel spending while local residents found it preferable to no extension at all. In Mini Metro, the politics are much simpler—no one cares much what you do as long as you keep commuter wait times down.

As a result, the byzantine compromises of other urban simulators are replaced by a series of straightforward trade-offs. Based around supply and demand, Mini Metro simply invites you to develop a network of routes and trains with limited resources in order to get people wherever they’re going. Connect an existing square to a newly minted circle, and people from those two locations, in the form of various shapes, will be able to travel back and forth. Next, a diamond might appear, and then another circle, until eventually your city is bustling with symbols waiting impatiently at one station or another as you try optimize the number of lines and cars in search of an ever elusive equilibrium.

But while a peaceful balance is always evading the player, the game’s design never loses sight of it. Minimalist throughout, Metro City’s interface has been folded into the game proper to make them virtually indistinguishable. For that reason, building out your public transportation system is like playing with a beautiful subway map, one that prizes simplicity and elegance above all else. The game’s paramount achievement is the ease with which it transforms an acutely distilled spreadsheet of complicating variables into a constantly evolving map that’s intuitive without sacrificing complexity.

As stations swell and overcrowding becomes the norm, choices must be made. Do you connect three circles in a row in order to create the shortest route, despite the redundancy? Should you increase the efficiency of a station with multiple transfers, or decentralize them altogether to avoid having multiple trains dump all their passengers at the same station? At the end of every week, recorded by a small face clock in the upper right hand corner next to an abbreviation for what day it is, players get a new train and the choice of one potential upgrade, ranging from an entirely new color-coded line to more bridges.

These gifts come with a sigh of relief, but the peace of mind they bring is short-lived. By mid-week the scramble begins again, with an array of intersecting and overlapping routes that feels even more mangled than before. They are always knots of the player’s making, however, and unraveling them more closely approximates the anticipation of untying a birthday bow than the frustration of trying to sort out a wet shoelace.

This difference can be traced directly back to the game’s fusion of interface and aesthetics. Mini Metro’s style of interaction, strings you can tug on and stretch, trains you can pick up and drop, makes the flat, two-tone depictions of cities like Cairo and Montreal feel aggressively tactile. Over the course of developing each transportation network, the contradictions of travel and their imperfect solutions are given a unique texture. The game doesn’t just show you the inefficiencies of your ad hoc development; it lets you feel them as well.

By linking these interactive aesthetics to a simulation kept sleek by its frugality, Mini Metro gives rise to a meditative experience that’s more serene and efficient than any existing transportation system. Many management games like to bombard the player with numbers and calculations. They wear their robust simulations on their sleeves like badges of programmatic honor. They reduce the player to a manipulator of menus, tasked with calibrating the spreadsheets running under the hood rather than asked to participate in the magic they produce. Just another cog in the game’s machine.

But Mini Metro submerges its formulae to create a space for more organic play. Like a city that leaves its streets to pedestrians, pushing highways underground and elevating trains overhead, the game seeks to avoid the anxious hustle of a traditional simulation by reducing clutter and keeping things at a more intimate, human level.