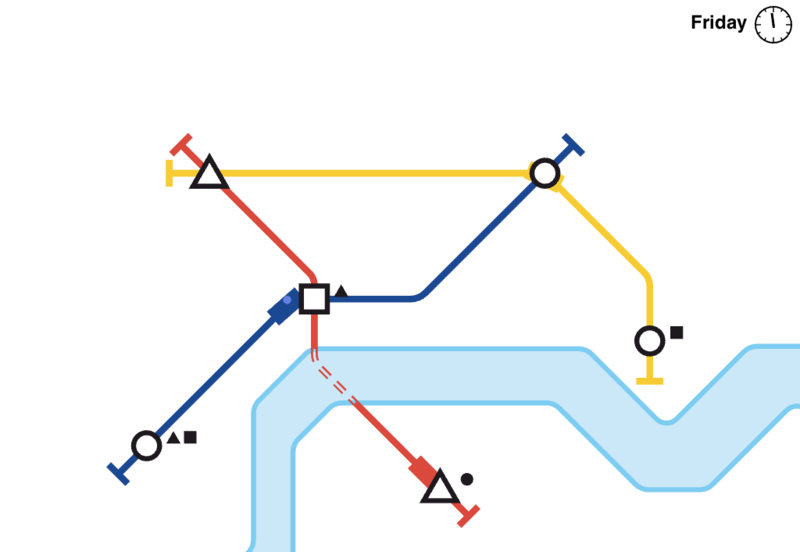 Even in its early Alpha state, it nails the key components that make for a great puzzle game. It has a clean and simple interface. It asks you to perform a simple task at first, then asks you to do it faster and faster under increasingly difficult conditions, until you lose. Like the grandfather of all puzzle games, Tetris, it’s not so much about winning, but how long you can hold off the inevitable failure.

Mini Metro starts as a plain, mostly empty subway map. As new stations pop up, you simply pull subway lines that connect them and get commuters where they want to go. As you progress, more stations pop up, requiring you to draw more lines efficiently to meet commuter demand. Rivers, intersecting subway lines, and out of the way stations makes things more difficult later on, while faster trains, bigger cars and other bonuses help relieve pressure.

That Mini Metro is essentially a public transportation manager makes familiar puzzle mechanics so much more meaningful. Suddenly, they’re not just abstract concepts, but truthful representations of a problem every city dweller is familiar with: Public transportation is never perfect, and—just like a Tetris player—eventually always fails.

“That’s the funny thing,” said Peter Curry, who’s designing the game along with his brother Robert. “People relate to that, they always see the problems of their own public transport in the game. We hear that a lot.”

Curry said that players will send links to the game to people who complain about their city’s public transportation system as a kind of explanation.

“We know our public transport sucks, but I guess it’s a hard thing to do,” he said. “Everyone sees their own transport’s failings and they connect to it like that. Public transport is always bad. they never get the funds required to do things properly.”

Like many of Mini Metro’s fans, I immediately related to the game thanks to my love/hate relationship with the Bay Area’s public transit system, which fails me regularly thanks to a variety of geological and economic issues particular to San Francisco. The first thought I had when I started playing was, “I could do a better job than the San Francisco Municipal Transportation Agency.”

Videogames are often about power fantasies, and Mini Metro’s is allowing you to build a subway system without having to worry about money and politics. You simply draw the lines like a god and they appear instantly.

But it’s still impossible to get right. The better you do, the more stations appear. The more stations appear, the more people use your system, which strains it further and further until it breaks. That’s not all that different than the real world problems in the Bay Area’s public transportation system. BART, which connects the East Bay to San Francisco, made cities like Oakland a great alternative to paying rent in San Francisco, allowing people to easily commute in and out of the city. Now, so many people commute by BART that it is overcrowded, and the slightest hitch in the system causes mayhem.

The more stations appear, the more people use your system, which strains it further and further until it breaks.

Mini Metro is such a perfect marriage of form and content, you’d assume that the Curry brothers did a ton of research on how public transportation works (or doesn’t), or that that they commute daily in a major metropolitan area. Neither is true. Peter lives in Wellington, New Zealand, a town of 200,000 people. It has buses, but there’s no subway in the entire country. His commute into town is a 15-minute walk.

“That’s the embarrassing thing,” he said. “People think we did all this research, but really there’s no hardcore simulation under it at all. We have our list of stations, the number of stations we’re gonna spawn, so all we do is pick a random spot on the map.”

Peter said that he and his brother came up with the idea for Mini Metro mostly out of necessity. They were talking about what kind of game they could make with a limited amount of free time and only two programmers. When Robert was on vacation in London he liked studying the Underground map and figuring out the best way to get from point A to B. It was Peter’s idea to make it about building the system, and the Ludum Dare 26 game jam, which had the theme of minimalism, pushed them to make the prototype which will eventually become a proper iPad game.

It was really necessity which inspired Mini Metro and the appeal of the design of the London Underground map, which is an unsung artform in its own right. It makes for a great, infinite puzzle. It just so happens that the public transportation that we use every day is an infinite puzzle as well, but one that’s not nearly as fun.