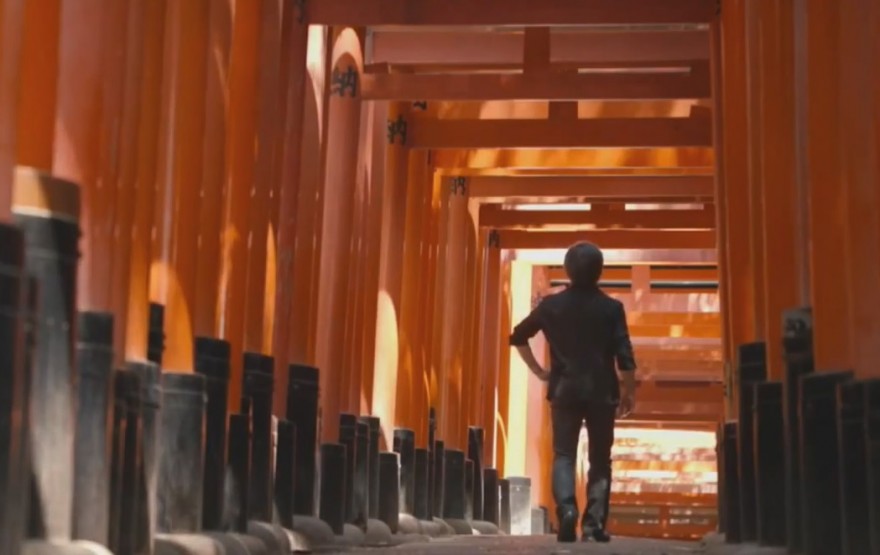 “When there’s an arch you want to go under it, right? That’s the kind of game I wanted to make.” When Shigeru Miyamoto delivers lines like that no one knows what he means. Not at first. He may be the famed designer of many of Nintendo’s most successful videogames from the past 35 years but Miyamoto is still lost inside the playful world he charted as a child. He continuously pulls ideas from it, getting on all-fours to demonstrate how he wants cat Mario to move, or holding pretend controllers in his hand to emulate the glee he supposes people will get from his games.

Miyamoto’s affinity with these seminal places.

The stories of how Miyamoto has—even now as a sexagenarian—piped his natural curiosity of the world into videogames are known. The Legend of Zelda is a result of his trip inside the caves around the Kyoto countryside in his youth. A dog near his home, chained-up and relentlessly barking, was transformed into the Chain Chomp enemy in Super Mario Bros 3. Love for the British TV puppet show Thunderbirds back in the 1960s informed the crew of fighter pilots in StarFox.

But what isn’t captured in the retelling of these stories is any image, moving or still, of Miyamoto’s affinity with these seminal places. Except, amid the hotbed of tech worship and videogame fandom that is E3, Nintendo shared a video during its digital conference this year that did just that. Miyamoto had a new game to present called StarFox Zero, and so Nintendo let him out from behind its walls of secrecy to talk about arches for five minutes.

In the video above we see Miyamoto walking through the red arches at the Fushimi Inari shrine in Kyoto, right next to where he grew up. The camera captures his upturned face, peering through the small gaps that separate the arches, the sunlight barely breaking through. In slow-motion, Miyamoto is shot from afar, stepping forward with a hand on his hip as a gesture of comfort and satisfaction. It’s this feeling that he wanted to instill in the players of the original StarFox back in 1993, and as it was Nintendo’s first game to use 3D polygons, he was able to put arches in the game that had a proper sense of depth in the virtual space. These arches encouraged you to fly under and through them as a playful diversion from the open sky, as Miyamoto wanted, but also showed off the new 3D tech.

a starship flying through the torii

But StarFox owes more to these arches than that. For starters, the proper word for the arches that Miyamoto talks about so lovingly is torii. These are traditional Japanese gates comprised of two pillars resting on a white stone, topped by a horizontal beam that curves upwards at its ends. There are also wedges that hold the wood in place, while some have a decorative ring called daiwa at the top of each pillar—the finer details of each torii differ. You’ll typically find torii at the entrance of a shrine in service of Japan’s largest religion Shinto, but they’re also found at Buddhist temples.

In Shinto (which is translated to “way of the gods”), followers carry out rituals that devote themselves to the religion’s many kami, which are spirits or gods. These gods are worshipped in groups, with one of them being the Inari, which is the kami of foxes, rice, and business (among other things). The Fushimi Inari shrine that we see Miyamoto waltzing around is the head shrine of Inari. It’s why the shrine famously has so many torii with each of them being a donation from a Japanese business looking for the gods’ favor. It’s also why we see Miyamoto looking up at statues of foxes found at the shrine. The foxes are considered to be the messengers, and when depicted are shown holding a key for a rice granary in their mouths. They are symbolic of Inari and its head shrine.

And so we see the origins of StarFox right there in and around that shrine. We can’t see what Miyamoto’s imagination projects onto the place in the video—though his awed expression offers suggestion—but at some point he must have pictured himself as a starship flying through the torii while Fox McCloud looked over him from a stony perch nearby. It’s in making that connection between play and place that Miyamoto’s videogames have emerged and is partly why they have enthused so many people over the years.