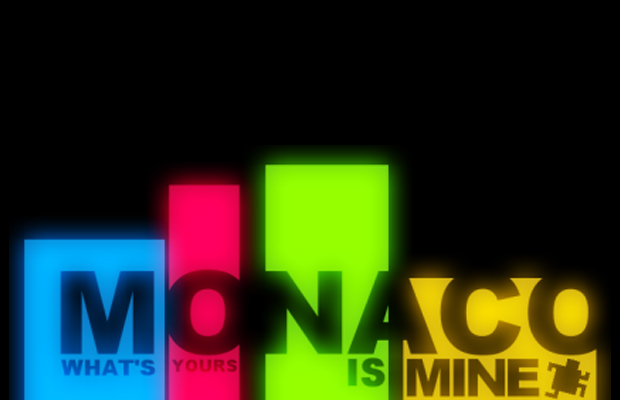 The Mexican standoff in Reservoir Dogs. Nick Nolte doing one last job in Monte Carlo. The getaway in The Getaway. Andy Schatz has seen a lot of heist movies. So, in 2010, when he sat down to make Monaco, the expressly striking arcade-stealth game for PC and Xbox 360, he had safe-cracking and Italian suits on the brain. The glorious final product is a play experience that seamlessly connects the waka-wack-wacka-wack of Pac-Man with the stylish complicity of a casino robbery. Here’s why.

Kill Screen: You mentioned Monaco was conceived during a fifteen week period of madcap design, during which you’d wake up and do whatever was on the top of your head. What was on your mind back in 2010?

Everything falls apart due to the character flaws.

The initial inspiration was heist movies. I wanted to make a game about heist movies. But, also, it was other games. I was definitely inspired by the mini-map in Hitman, Gauntlet, Pac-Man. You can think of the guards as ghosts. It’s inspired at its core by heist movies, but then I used the design language, the Lego blocks, so to speak, from other games, in order to build up the grander picture. That’s essentially what Monaco is.

I definitely picked up on what you’re saying. The game seems to flip back and forth from me thinking about it in terms of unadulterated gameplay, like an arcade game or something strategic, to me actually thinking I’m pulling off a heist.

Heist movies actually have a flow like that. They’re very much procedurals. They’re procedurals that are driven by character arcs, right? You always have a scene where the team is describing what the plan is and looking at the blueprint. In a sense, that’s when you’re thinking about the game on a purely mechanical level.

But the characters and their flaws often have a big impact upon the story, and create the twists and turns. There are moments of true role-play in the game like that, where you’re in the moment, where you feel like you’re in the heist itself, even if it’s your imagination taking you there.

What are some of your favorite heist movies, some that you borrowed from in Monaco?

I really like Confidence, which is really more of a con man movie; Out of Sight, which is a Soderbergh movie, which is way better than his more famous Ocean’s Eleven, Twelve, and Thirteen; The Good Thief, a Nick Nolte movie, actually set in Monaco, the big heist takes place at the Monte Carlo; a movie called Standard, with a South African cop turned bank robber (the ones based on true stories are often the best); The Bank Job, pretty fantastic; Lock, Stock and Two Smoking Barrels, amazingly clever.

Why did you bring the gun?

You were talking about the importance of character traits. The characters in the game, the Locksmith, the Mole, the Gentleman, the Redhead, etc., definitely have their own strengths and weaknesses. Is that something you got from heist films?

Reservoir Dogs was a big inspiration. The characterization in that, it’s really interesting, because that one isn’t about the heist at all. It’s just character arcs. It’s after the heist. It’s everything that falls apart due to the character flaws.

So you were looking at Tarantino’s characters?

Yeah, for sure there have been points when I imagined my characters being called Mr. Pink and Mr. White. The idea that you have a maniac and a coward and all of that is, of course, that’s common across most heist movies, but there is definitely a real focus on it in Reservoir Dogs.

So what does that bring to the table? I imagine it really comes into play in multiplayer.

The single player game is slower, more methodical, stealthier game. But as you add more players, it tends to evolve into chaos. In heist movies, there’s always the one guy who brings the gun, and everybody’s like, Why did you bring the gun? We’re not supposed to shoot anyone. And then he shoots someone and everything goes to hell. That’s the kind of thing that tends to happen.