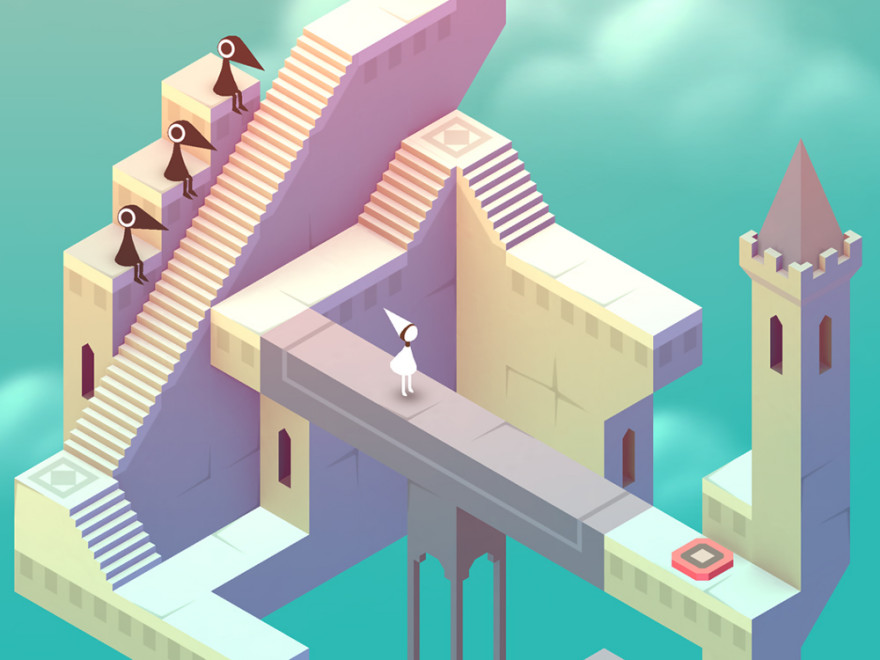 Whenever I consume media on my iThing, David Lynch and his impassioned YouTube video on the subject come to mind. Movies were once larger than life; now we cup them in our hands while shutting out the noise of the train. Games once tied us to the floorboards; now we jump in and out during commercial breaks (or play some Threes while Titanfall is loading a match). It’s not that Lynch is right or wrong, but I’m interested in considering what sorts of experiences these devices are suited for. Perhaps it’s better to think of these as potential digital equivalents of poems or short stories—a mobile game that can be concise and lyrical. Monument Valley gets pretty close.

I say this in part because I played the entirety of Monument Valley while on a three-hour flight. My headphones negated surrounding noise, and there was time to savor my orange juice. Most folks around me were watching movies that took nearly the same amount of time as the game, but I wonder if their entertainment was anything as carefully designed as mine. Overall my Monument Valley experience was full of charm, perfect for a single marathon playthrough, or short stabs.

A mobile game that can be concise and lyrical.

A tidy narrative experience, no matter how charming, often doesn’t satisfy many videogame players more interested in a high dollar-to-hour ratio. In that sense, Monument Valley won’t be considered robust. The puzzles consist of making your way to certain objectives by simply tapping where you intend or hope to have the princess walk to. Often you can simply tap the perceived button and the princess will cross half the stage with nary a blip. I sense how this could reduce the feeling of play, mimicking more the feeling of flipping through a book.

This isn’t a negative for me, though. A fantastic poem or short story doesn’t leave me wanting more of that piece, but more of a similar experience. That’s what libraries are for. And in Monument Valley, I don’t feel that using a controller to enact many button presses to make a handful of levels slightly more elaborate would yield any larger sense of accomplishment. I am the type of puzzle-player whose default setting is “try everything until something works” rather than teasing out its logic toward an indented conclusion. As such, when my first instinct was most often successful, the brain’s reward centers stopped firing up. But I didn’t play Monument Valley just to be told I was smart, and thankfully the visual aesthetic and sound design flesh out the void left by a lack of more rigorous play sessions.

These deliberate creative decisions, along with a concise narrative, leave me with a well-wrought game in ten sections, or—dare I say—poetic stanzas. Monument Valley draws from Escher, geometric planes, and making reality fit perspective rather than vice versa. The player is meant to play the stage, with little melodic runs following the structures your fingers are dragging around. Otherwise a contemplative hum lingers while you and the princess rest, and undulates as you enact the best route to a button or doorway. Monument Valley, while not unthinkable on traditional monitors or with controllers, relishes the freedom to manipulate your screen’s angle, and that same touchscreen pulls your ham fists into the flat world to shove walls and structures all around the place.

The game-y interactivity is essential to the overall experience, minor though it may be; watching someone play this would not be half as fulfilling. This is a piece meant to be directly interacted with. The influences are obvious: Fez’s perspective shifts, Sword & Sworcery EP’s soundscapes and flatness, some of Edge’s geometry, the reinterpretation of “point & click” as “point & tap.” Monument Valley’s advantage is that getting your fingers into the stage brings it to life. This is gaming’s equivalent of a well-directed short film. A long drink in of a special exhibit. A short story so finely honed that to embellish further would only dull the edge.