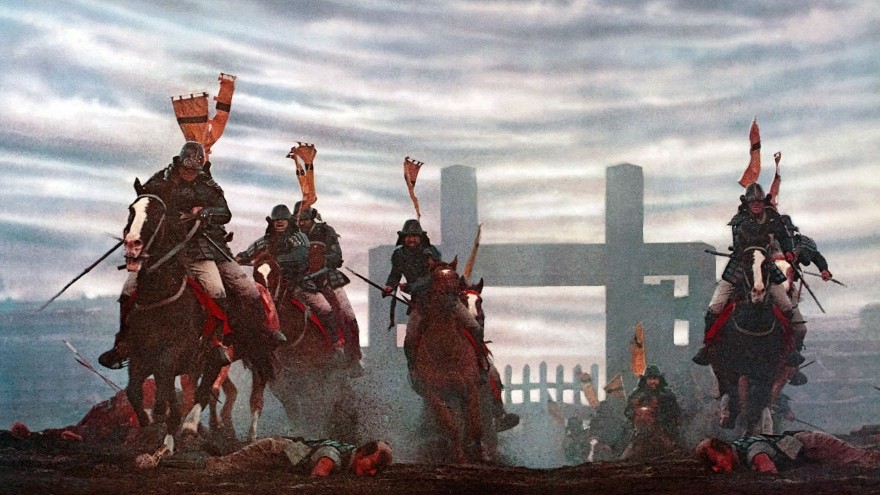 When you’re making a videogame based on an unfinished script by legendary Japanese film director Akira Kurosawa you should shout about it. The fact that Tecmo Koei and developer Team Ninja hasn’t said a damn thing about it upon re-announcing their historical action-RPG Nioh is concerning.

Nioh is the second game to be based on an Akira Kurosawa script. The first was terrible. Seven Samurai 20XX took Kurosawa’s 1954 classic Seven Samurai and adapted it to a futuristic 21st century setting. It was made alongside an animated series to commemorate the film’s 50th anniversary in 2004 and was even officially licensed as a Kurosawa Production.

We look to Nioh with fire in our eyes

That’s all pretty shocking given how bad it was. You’d expect something made to honor someone as treasured as Kurosawa to have some worth. Electronic Gaming Monthly put it best in its review of Seven Samurai 20XX: “I expect ‘Seven Samurai’ Director Akira Kurosawa’s grave is equipped with some sort of industrial centrifuge to accommodate the amount of spinning he’s doing right about now.” The game was a bland exercise in button-mashing through mutants and cyborgs. It was an insult.

We look to Nioh with fire in our eyes, then. It better have some weight to it, otherwise, videogames, you can forget about ever adapting Kurosawa’s work again. The problem is that Kurosawa’s brilliance is massively specific to cinema. As Tony Zhou notes in his analysis of Kurosawa’s camerawork, he told his stories through the movement of his shots, the beauty and subtle symbolism of nature’s scenery (especially its weather), as well as a noted use of unconventional (to Hollywood’s standards) cuts.

Helped along by the gifted eye of his cinematographer Takao Saito, there became an established ‘Kurosawa style’ that let the spaces he shot evoke emotion rather than spelling it out with dialog; it could be as simple as rain falling in the background, or as complex as a man’s grief noticeably rippling through a crowd as the camera drew back to take it all in. These shots are simultaneously as tiny as a teardrop and as large as an emperor’s army. Picking them apart could tell you more about a character’s turmoil or the significance of a place than any line of dialog could ever manage.

This is why Kurosawa is considered a master of composing images rich with meaning. He is noted for painting scenes before shooting them and, indeed, many of his shots have the layered visual information of painted epics. His best images are windswept tragedies—buildings are ablaze, families torn, leaders kneel to the cruelty of the world, soldiers hesitate in their violence—that seem to ensnare all the heartache of post-WWII Japan. Achieving this required Kurosawa to have command of the camera and the actors it captured. So how can a videogame that puts the framing of shots in the player’s hands possibly get close to snatching even a fraction of that Kurosawa feel?

Perhaps this is why there has been no mention of his name in recent announcements about Nioh. This may be wise. But Nioh carries his legacy regardless. Despite being slated for a 2016 release on PlayStation 4 at this year’s Tokyo Game Show, Nioh actually started out life 10 years ago, when it was being produced alongside a movie called Oni. Both the videogame and the movie were based on Kurosawa’s unfinished script (also titled “Oni”), which was eventually finished by his son, Hisao Kurosawa (who was to make his directorial debut), and game producer Kou Shibusawa.

Predictably, the bloodshed has also survived

The movie ended up being scrapped in September 2005 but production on the game continued, if only intermittently. And so, here we are, a decade and two console generations later, this lost Kurosawa story left to rely on videogames to come to life. Shibusawa still has his name on it. But what, if anything, remains of Kurosawa’s original vision?

For one thing, the concept is still there: you play as a blond-haired samurai, who’s the son of a Japanese lord and a western woman, as he battles against demons in 16th-century Japan during the Warring States period. Predictably, the bloodshed has also survived; the gore almost hissing from bodies as blades slice through them in Niho‘s latest trailer, just as it did in Kurosawa’s samurai films. But more impressive is how some attention has been given to composing scenes that exaggerate themselves through weather and lighting, deepening the mood: a low-mist crawls across stones, red flags fidget loudly with the wind, firelight seems to drown in its fight against the darkness. Have a look at that bloodshot moon in the trailer, which is realized as if a beacon for the violence; unnaturally red even through the clouds that try to smear it.

But the fear is that this is a reaching analysis. This is, after all, yet another videogame about slaying hulking demons. Given the prevalence of these types of plot lines in action games it’d have to do something outlandish to be remarkable. And, even then, it probably won’t have the context that Kurosawa intended to present it with. Which isn’t a problem in itself. But you’d hope that there exists a cause among the game’s production team to make it something truly worthy of Kurosawa’s name. The fact that the director’s name is avoided completely instead of thrust proudly at us suggests this isn’t the case.

This isn’t to say that Nioh has no chance of at least being thoughtful. But is there a chance to convey, with any arresting impact, the solemnity of Kurosawa’s vision of hell on Earth? We can only wait to see. If nothing else, at least Nioh appears to be an improvement on Seven Samurai 20XX‘s attempt to honor Kurosawa. That’s about all we can realistically hope at this point.