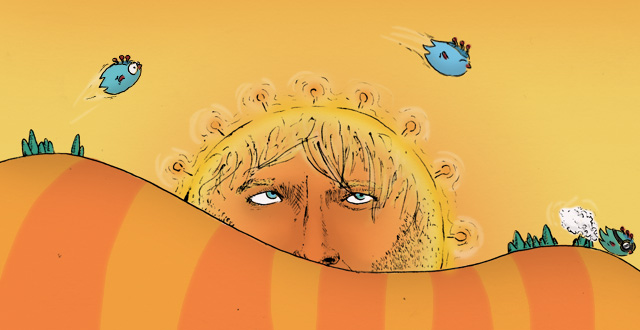 Andreas Illiger is the German developer who makes up 100 percent of the team behind Tiny Wings, the simple iPhone game that shot to the top of the App Store charts seemingly overnight. Much of the things that made Tiny Wings a success flow from the personality and ambitions of its creator. I interviewed Andreas by email, exploring Tiny Wings and its themes, as well as the life changes that result from creating such a successful game in such a short period of time.

Why do you think Tiny Wings was so popular?

I’ve talked a lot with many people about this subject in the past months, and the main aspect they mentioned was “character.” For me the atmosphere of a game is very important. I wanted to make a positive game (there are so many negative ones out there) and I think this touches the players. I got a lot of emails from fans who said that my game gives them happy feelings, and that is the greatest thing I can hope to achieve with one of my works.

People seem to love the bird character because they can identify with his story. He is a little bit disabled with his tiny wings and he is stuck on the ground. The player helps him to reach his dream of flying. The tiny metaphor hidden in the gameplay is that anybody can reach his or her dream even if he or she has tiny wings. That is not a very unique message, but I think it’s a strong one which also touches people.

How has success changed your lifestyle?

I still live in my cheap two-room apartment together with my girlfriend, I still do not have a car (I don’t even have a driver’s license), and most of my days are the same as before Tiny Wings: sitting in my room doing creative stuff.

Things that changed: I am buying good food, mostly organic (in [2010] I was very poor and had to buy cheap food); I bought a new laptop and some cool toys; I flew to the Apple Worldwide Developers Conference in business class. It was the second flight of my life—I am afraid of heights, but I have always dreamed of flying.

I wake up at around nine o’ clock, go immediately to my computer, try to avoid looking at my email, check some blogs, and start to work. I have a timer which rings every hour so I have to take a break (for effectiveness and health). After the first two hours I eat some breakfast. I work until 4 p.m., hang out a bit (this is the time of the day when my concentration is down), and start working again around 8 p.m.. Around 1 a.m. I go to bed, read a good book, check out new games for the iPhone, and fall into the dream world. That sounds very structured but it is very chaotic.

I love to be creative and often neglect a lot of friends and stuff. That is bad. So my daily routine is always an attempt to reconcile every aspect of social and personal life, be productive, be healthy, and have fun.

When you go to bed, what sort of books do you read?

At the moment I am reading the books of Stanislaw Lem—I think he was a genius and his books are very inspiring to me. Another inspiring book I read this year was Masters of Doom, the story of [John] Carmack and Romero.

I also have a lot of books about Nondualism and always come back to these books if I need a new point of view.

I am afraid of heights, but I have always dreamed of flying.

Bread from a local baker who bakes his bread in a wood-fired oven (you know we Germans love bread), macadamia-nut-cream spread, a local cola called “Fritz-Kola” with less sugar and more taste, and everything without fish (I am born under the sign of fish so I cannot eat my friends).

What was the inspiration for Tiny Wings?

I wanted to make a game about the dream of flying—because that is the dream of my childhood—and thought a lot about a character who cannot fly but wants to. Penguins were too obvious, so in the end it was a bird with tiny wings. I think such a story is important for a game character.

Every creative work I do is mainly inspired by the music of Boards of Canada. Their music has been my favorite for 12 years and I really would love to create something that is as genius as their music.

How did it feel to finally get to fly?

I was a little bit tensed up and full of adrenaline, but it was great to see the Earth from above. Everything looks so beautiful from the bird’s-eye view.

I was very euphoric.

The tiny metaphor hidden in the gameplay is that anybody can reach his or her dream even if he or she has tiny wings.

Do you intend to keep working alone going forward?

At the moment, yes. But since the success of Tiny Wings that has been really hard. So many people expect so many things from me now, and it is difficult to do everything on my own. At the beginning I was utterly overwhelmed. I decided to reject mostly every proposal I got, learned a lot about focusing, and I’m now trying to relax and do everything at my own speed.

There are many advantages to doing everything on your own, but in the near future I want to hire one or two coders. Coding is the part I like the least, and I have so many ideas I want to realize. If I met the right guys I would love to build a cool team and work together with other creative people (it can be very lonely to work alone the whole day) in a big creative house I want to build. I will see.

What sorts of proposals did you get?

What would you like to be doing in five years?

I don’t think much about the future (I don’t believe that something like the future exists—it is only in your imagination), but I would love to make more music, more games, an animated short movie, and a picture book for children.

I live my passion and never want to do something else, so I would like to do the same thing I do now.

Between the belief in star signs and your thoughts on the future, it sounds like you have already thought quite a bit about finding the meaning of life. What core beliefs would you say most motivate you?