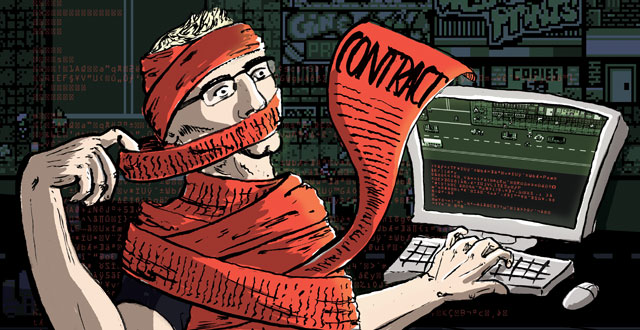 For the seven years that Brian Provinciano has been working on Retro City Rampage, he’s been thinking of it as pretty close to done. But when he decided he wanted to release it on Xbox Live Arcade and WiiWare, he encountered a labyrinth of administrative tasks that would test his patience and his determination. With the release of Retro City Rampage very much within sight, and a number of awards under his belt, Brian spoke to us in August about the frustrations of working alone on a game for two major platforms, what keeps him sane, and what makes it all worth it.

You are currently working alone, is that right?

Right. I’ve got an additional artist and a music guy, but I do everything else.

So why did you decide to work by yourself on this game?

It started out as a smaller project and expanded into something bigger. Also, I didn’t have the budget to hire other people. It’s a self-funded indie thing, so it’s really being developed on a shoestring budget.

Do you mind sharing how you got that funding?

Well, I had actually started working on this while I had been working in the industry for years, and eventually I had saved up enough money to take the lead and just go. Since then I’ve had to cash in my retirement savings, put my mortgage on the line, and borrow some additional money to keep it going, because everything takes longer and costs more than one would expect.

What do you like, in particular, about working independently?

The creativity is like nothing else. I’ve worked in other studios, on smaller games, medium games, and even triple-A [games]. I would definitely never want to go back to working on a triple-A game. I don’t feel like there’s enough creativity there; people’s voices aren’t usually heard as much. There’s too much noise from other departments trying to influence things. It doesn’t feel like this great collaborative process as much as people just stepping on each other’s toes, from my experience. But, more importantly, it feels more like you’re all just cogs in the machine.

When I’m doing this stuff by myself, creating a mission, adding mechanics through code, doing scripting, writing dialogue, throwing in animations, it’s really an improv process. As I’m writing comedy, for example, an idea to throw in an animation will pop into my head, and then I’ll throw that in and it’ll make the scene so much better. Then I’ll add a mechanic, and I’ll adjust that and fiddle with it and make it feel right. Then, depending on how that feels, I might change the art to better accommodate the mechanic. It’s a lot of back-and-forth, fiddling and tuning, kind of like I’m sculpting something. That’s something that’s not as easy to accomplish when you have a big team.

What problems have you been having while working on this game?

The majority of the problems have been all of the other stuff that no one thinks about, or underestimates. I spend most of my time these days not actually developing the game, [but] dealing with production stuff, marketing stuff—whatever it is.

All of these things add up. I’ll try to sit down and finish that last 2 percent of the game, and then I’ll get a bunch of emails that need to be addressed “immediately.” I have to address those, and before I know it, it’s the end of the day.

So right now you’d say you have about 2 percent of the game left to finish?

What was it about WiiWare and Xbox Live Arcade that made you want to choose those platforms?

Well, the way I saw it was that I’d worked so hard on this game for so long, to have the big launch that I’d dreamt of all my life, it would’ve had to come out on the consoles. So I just shot for the stars to make sure it got there. But I completely underestimated how much work is involved, and now really appreciate the value of having a producer on a project.

Do you have a daily routine?

I do: Get up, have breakfast, check email, go to my office, go to the gym, then go back to the office, then go home and sleep usually. Then, sometimes I’ll work in [going to] visit my girlfriend, or sometimes she’ll come visit me and I’ll see some friends sometimes. But these days I am quite a workaholic and most of the time when I’m seeing friends we’re talking shop, or talking game design or something like that.

So you bought office space?

Yeah, I’m renting an office, because Nintendo requires you to have an actual office. That’s another unfortunate cost of having a game company. Not just paying the incorporation fees, but also paying for office space and stuff. Just for something on paper, effectively, that your company’s legit.

What do you eat?

I usually eat fairly healthy. I love yams; they’re very good. I love ethnic food, so I’m always trying to try new things and just going to different markets and different restaurants. I think I’ve tried just about every kind of food under the sun except for stuff that’s scary to me. I have a good tolerance for stuff but I won’t eat balut, which is kind of like a duck egg with a duck fetus in it.

“Business became a much bigger deal and I couldn’t just go home after a long day of work and do programming on the game.”

Wow, that sounds kind of horrifying.

That’s where I draw the line.

What keeps you inspired?

What inspires me is when I actually have time to work on the game and move it forward. It really is a vacation for me when I am able to, without any distractions, just work on the game. And that’s kind of the funny thing, right? Here I am, living the dream—working on the dream game of mine, and working on it doesn’t feel like work. Unfortunately, it’s surrounded by all this other administration stuff and that’s the tough part.

It sounds very similar to having a full-time job that you hate, and then having to go home and do what you really want to do.

That’s the funny thing. I was working on this part-time for many years because I wasn’t ready to take the risk of giving up medical benefits and a steady paycheck and all of that. I would work my full day job, sometimes working a full day with crunch time, and then I would go home and work on this more. It really took its toll on me after awhile.

I swapped having a day job for having more responsibilities. Now I had to make sure that I made income and I was able to survive. Business became a much bigger deal and I couldn’t just go home after a long day of work and do programming on the game. Now I actually had to spend the time on business, making sure that it was signed with a console or a publisher and all of the stuff was taken care of, and making sure I had enough money in the bank to pay contractors to finish faster. It all adds up, and that, in many ways, takes up more time than having a day job did.

Though it seems like if you’re working on the game part-time or after work, it doesn’t seem like it can be done at all.

One clear example is the fact that when I was pitching my game to Microsoft to try and get it green-lit, everyone was telling me “It’s a long process. It will probably take you about six months,” and I was just shrugging it off, like, “No, no! My game’s multi-award-winning and it’s pretty much done”—or I thought at the time it was pretty much done—“and it’s got so much going for it. It’s already running on the Xbox. So they pretty much just need to give me the contract to sign, and we’ll be good to go.”

It still ended up taking well over six months to negotiate and get it green-lit and pitch it, and all of that. In the process, I had to write hundreds of pages of documentation, the pitch document, then further documents, then outlining further details about the development, and about the team, and it just went on and on. Finally, when it was green-lit there were still a couple months of just negotiating the contract.

Where would you like to be in five years?

I’d like to have my home paid off and have enough money in the bank that I don’t have to worry so I can just work on projects of passion without stressing about where my next meal is coming from. I just want a comfortable, secure life.