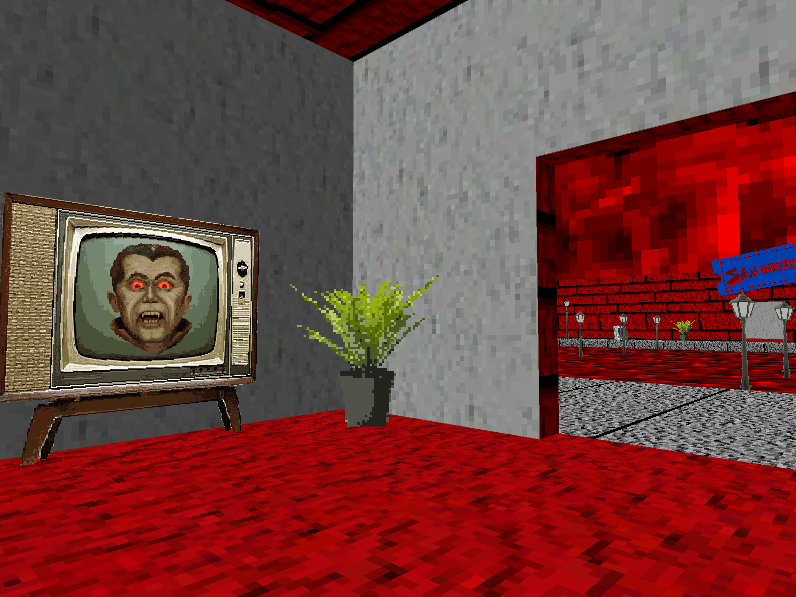 Lilith, or Cicada Marionette, once told me that she has played too much of From Software’s 1994 Japan-only PlayStation RPG King’s Field. Spending so much time in those early 3D underground crypts, hoping not to die in the dark, has left a lasting effect on her. This is why, through her own videogames, she’s “desperately trying to capture the feeling of sludging around uncomfortable dream geometry.”

Her biggest and most well-known effort is last year’s Crypt Worlds: Your Darkest Desires, Come True! which, as Lilith described to me, is a “futile piss sim.” Unlike King’s Field, there are no monsters in Lilith’s games, not ones that you trade damage with, so you end up “sliding through countless passages with the same repeating texture until you start crying”—or at least, that’s what Lilith is aiming for.

Lilith uses a breadth of textures to obtain a strong sense of individual tactility in every single item and surface.

To look at Oneiric Gardens is to easily recognize it as Lilith’s latest effort to surround us in garish textures and kitschy 3D worlds. Notice the deep red low-rez texture of the lava-like carpet, the frazzled and flat sprite of a plant pot; the low-fidelity decorations are there to incite feelings and tonality rather than ascertain finer details. That’s why Lilith’s single instruction is to “try to grind into as many things as possible.” Although you certainly can’t, you should try to rub your virtual body up and down the rough feeling of stone and the sharp points and curvy patterns of gothic fencing inside the game.

Appropriately, the layout of resembles a “feel box” game. They’re popular around Halloween and on celebrity game shows, and involve dipping your hand into the contents of a box that you can’t see into—usually it’s something gooey or stringy. Likewise, has a central hub that contains a “series of chambers drawing from half-remembered spaces, feelings.” These chambers are portrayed as houses from the outside but become labyrinths and worlds on the inside.

In one, you move through a lavish entrance hall, past a spinning corridor, and into a small mazy room sewn together with big purple, pink, and black pixels, bumping into beeping aliens that speak in emoticons. Another room is populated by stacks of cubes that are personified by honks and burbling as you topple them over. At one point you’re teleported to an endless water world. It seems jovial at first, allowing you the freedom to surf between palm tree islands and empty stone buildings, but after a few minutes you feel the loneliness of this place in the middle of nowhere.

How Lilith portrays the different feel of each chamber isn’t typical of videogames, as she has different ideas about consistency. Rather than trying to maintain graphical fidelity so that all objects blend into a whole, Lilith uses a breadth of textures to obtain a strong sense of individual tactility in every single item and surface. If an object is meant to be smooth it will be low-poly and quite flat, whereas something like a rough stone floor will intentionally stand with out heavy black outlines and blurry grays so as to have a grainy quality.

Each space in Oneiric Gardens, as with all of those that Lilith creates, feels alive as you look around and move within them. It reflects how we tend to remember places very well, which is usually through an exaggeration of how they felt to us, rather than an exact replication of their forms.

You can pay-what-you-want to download Oneiric Gardens on itch.io.